Vanilla Semifreddo with Raspberry Sauce, plus other favorite desserts 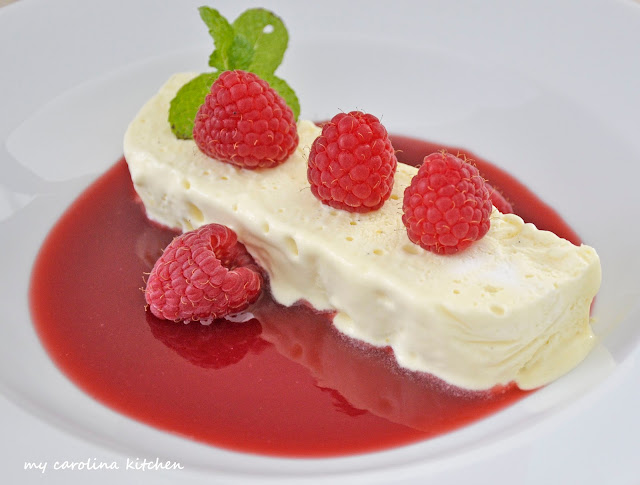 Valentine’s Day is rapidly approaching and for me, it’s time to think of what dessert to serve. Vanilla semifreddo with raspberry sauce is a special dessert worthy of a dinner party or a Valentine’s Day treat. It’s essentially frozen vanilla mousse. Both the semifreddo and the raspberry sauce can be made ahead and keep for quite a while frozen, which is very appealing.

We found that the semifreddo melts quite quickly and chilling not only the individual serving plates but also the serving platter will make your life easier and your presentation a lot smoother. You could even go so far as to chill the spoons. Fresh mint sprigs make a pretty garnish and give a burst of color to the final product.

The raspberry sauce was especially the star of the show and a real keeper. We strained ours for a more refined sauce, but you can certainly skip it. The sauce would be fabulous with a good store-bought ice cream. Our current favorites are Tahitian Vanilla Bean and Double Dark Chocolate Talenti gelato. Another plus is that the sauce keeps in the freezer for three months. A win, win. 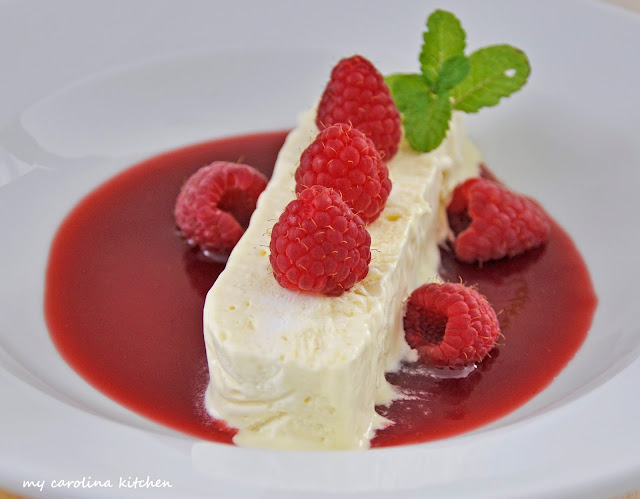 Lightly oil an 8 ½ x 4 ½ x 2” loaf pan and line it neatly as possible with plastic wrap, allowing enough to drape over the sides to later cover the top. (Ina lays two pieces of plastic wrap across the pan, overlapping in the middle.) Place the pan in the freezer for at least 4 hours.

Put the egg yolks (reserve ½ cup of the eggs whites and discard or save the rest for another use), ¼ cup of the sugar and the vanilla seeds in a medium-heat-proof bowl and beat with a handheld mixer fitted with the beater attachments for 2 minutes until light yellow and thickened. Place the bowl over a pan of simmering water and beat the mixture continually for 3 minutes, until doubled in volume and warm to the touch. Off the heat, beat the mixture for one minute.

In the bowl of an electric mixer fitted with the whisk attachment, add the reserved egg whites, the remaining ¼ cup of sugar, and the cream of tartar and beat on high speed until the whites form firm but not dry peaks. Fold the egg whites into the egg mixture with a rubber spatula.

Without washing the mixer or whisk, pour the heavy cream, vanilla liqueur (if using), and vanilla into the bowl and beat on high speed until it forms soft peaks. Fold the whipped cream carefully but thoroughly into the egg mixture. Pour the mixture into the prepared pan, cover with plastic wrap, and freeze for at least 4 hours.

To unmold, dip the pan in a bowl of hot tap water for 8 to 10 seconds and turn the semifreddo upside down onto a chilled rectangular serving plate. Peel off the plastic wrap. (You can cover and refreeze the semifreddo for a few hours on the serving plate.) Pour several tablespoons of raspberry sauce on each chilled dessert plate, cut 1-inch-thick slices of the semifreddo, and place them in the center of the sauce. Sprinkle each serving with raspberries, garnish with a sprig of fresh mint and serve immediately.

Place the raspberries, sugar, ¼ cup water and the brandy or framboise in a small saucepan. Bring to a boil, lower the heat and simmer for 4 minutes. Pour the mixture and the preserves into the bowl of a food processor fitted with a steel blade and process until smooth. Strain well and push as much liquid as possible through the sieve (optional but recommended for a smoother more refined sauce). Thoroughly chill.

Cook’s notes: Don’t forget to bring the eggs to room temperature. Ina says you can even leave them out all night. Their shells will protect them. It is important to chill the serving platter and the individual dessert bowls. The frozen semifreddo melts quickly and it helps if the platter and plates are well chilled. You might also chill the spoons. 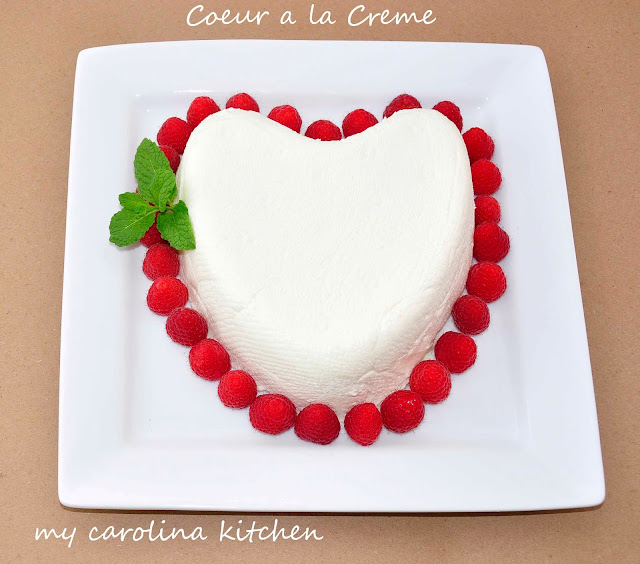 Of all the desserts we’ve made, my two favorites for Valentine’s Day are the heart shaped Coeur a la Crème with raspberry & Grand Marnier sauce, recipe here, and the luscious and always popular Crème Brûlée, recipe here. 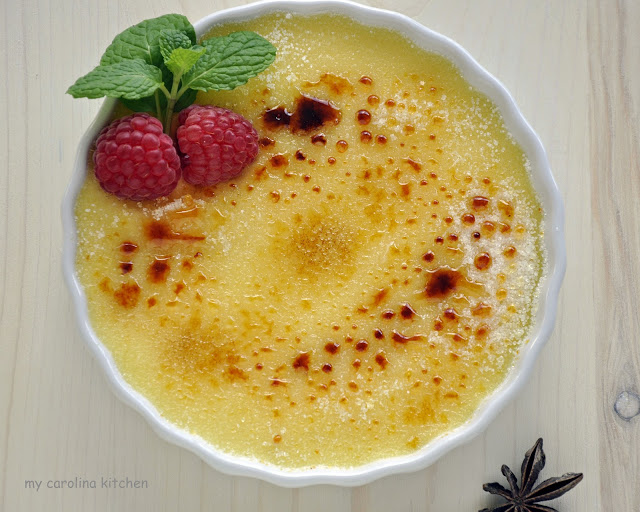 I came rather late in life to love desserts. It wasn’t until a visit to Germany, Austria and Switzerland did I begin to appreciate quality desserts. European desserts, despite all of their grandness & richness, are, to my taste, less sweet and sugary than their American counterparts. Just compare the taste of a cookie from an American bakery to its European counterpart and you’ll know exactly what I’m talking about. Most Americans over sweeten their desserts.

If I were to compare the Coeur or the Crème Brûlée to the Semifreddo featured above, I would pick either the crème brûlée or the coeur. All three are prepared in advance, but the semifreddo was the most complicated of the three and delivered the least amount of satisfaction & flavor. No Coeur mold? Click here for alternative ideas. 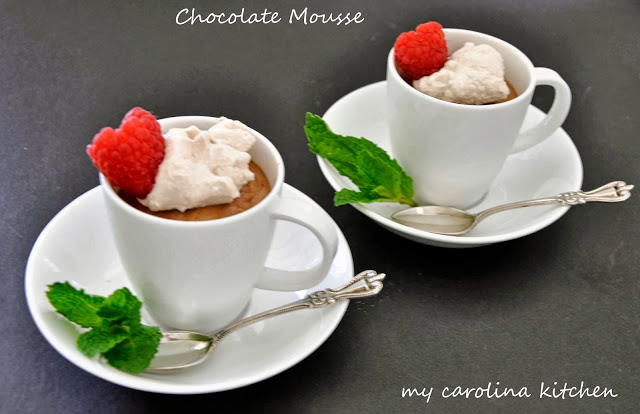 Meakin has always been the dessert maker in our family and his two favorites are chocolate mousse, recipe here plus three with a crunch, recipe here, and the crème brûlée that I spoke of above.

I also came late in life to including dessert making in my repertoire. Here are three of my favorites. Of course they are the easiest to make and all feature chocolate. 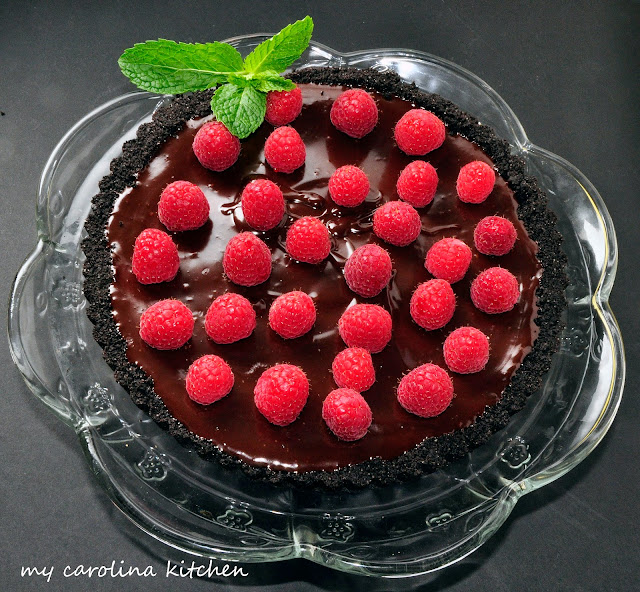 A chocolate raspberry tart, recipe here, is an easy and a decadent dessert to impress the fussiest of guests. It too can be made in advance. When you’re ready to serve, all you have to do is garnish with the fresh raspberries and you’re good to go. This chocolate cassis cake is for all of the chocolate lovers. It’s glazed with a dark chocolate ganache spiked with crème de cassis and served with bright, sweet berries on the side, recipe here. I guarantee it will definitely satisfy your chocolate cravings. 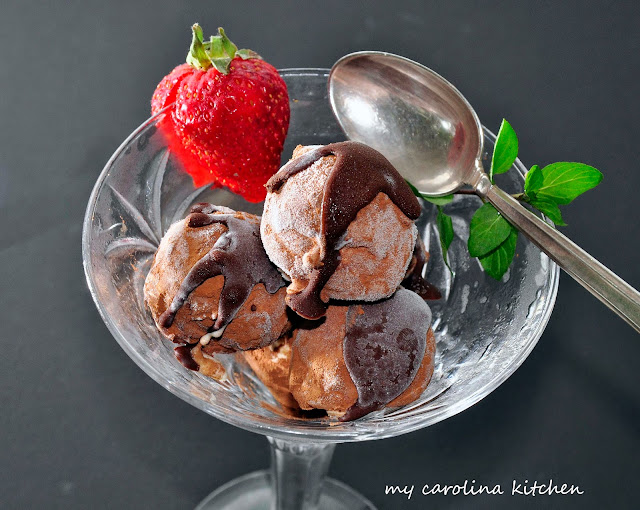 Frozen chocolate truffles, recipe here, only take a few minutes to prepare, but you’ll need to allow time for them to freeze properly. For a change of pace, you can use a variety of flavors of ice cream.


I hope you all have a fabulous Valentine’s Day.

Posted by Sam Hoffer / My Carolina Kitchen at 1:00 AM