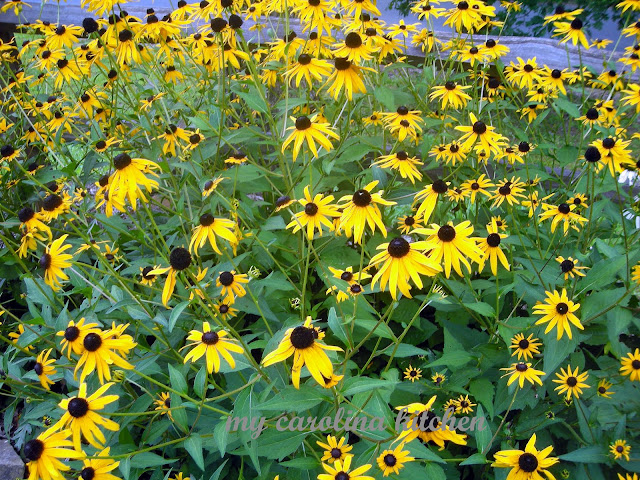 Whew. I’m back to say hello. I’ve been missing in action for a couple of weeks. These lovely black-eyed Susans are currently blooming in our garden in North Carolina and their smiling faces are from me to you to say how I’ve missed visiting with each of you and dropping by your blogs to see what’s happening in your world.

I am finally feeling a bit better and some of the constant nausea that has plagued me for the last six weeks has subsided. I don’t normally talk about my health. In fact when anyone asks how I feel, I always answer with a cheery, “I’m fine” and smile no matter what. The Bahamians have a saying, “Don’t put mouth on it,” meaning if you say it, it might come true. Perhaps that’s why I always say I’m fine, even when I’m not. But in truth I suffer from chronic back pain and my doctor is constantly searching for new medications that give me some relief. The latest one apparently collided with something else I take, causing my sodium levels to plummet and I ended up spending the weekend in the hospital.

Meakin bought a bottle of Chateau St. Jean, one of our favorite Sonoma Chardonnays, and we planned a little celebration of my being home and not spending this weekend in the hospital. Just as I was beginning to feel like my old feisty self again the call came from the doctor’s office. “Follow a diet of “clear liquids only” over the weekend. Your blood test indicated you have an irritated pancreas. If you begin to feel worse (worse? I just started to feel better!), go to the emergency room and tell them Dr. Larson said to put you in the hospital.” Great- what a way to spend the weekend, drinking dinner (what a shame wine doesn’t count) and worrying and wondering if or when I’ll start to feel worse. 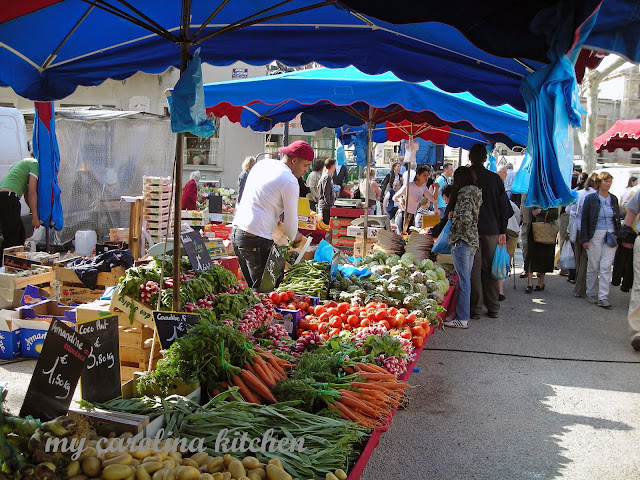 I miss each of you and hope to be back in the swing of things really, really soon. In the meantime, enjoy this lovely photo of a market in France. Believe me, I wish I was in the south of France strolling the streets of Saint Remy with my husband, holding hands, and shopping in this lovely market this very minute instead of at home in North Carolina on a clear liquid diet. Jell-O anyone? 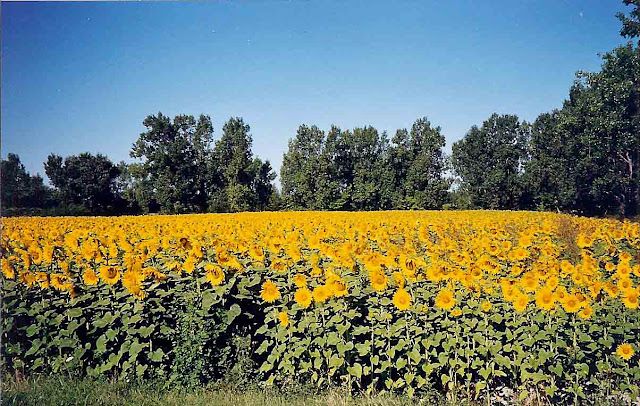 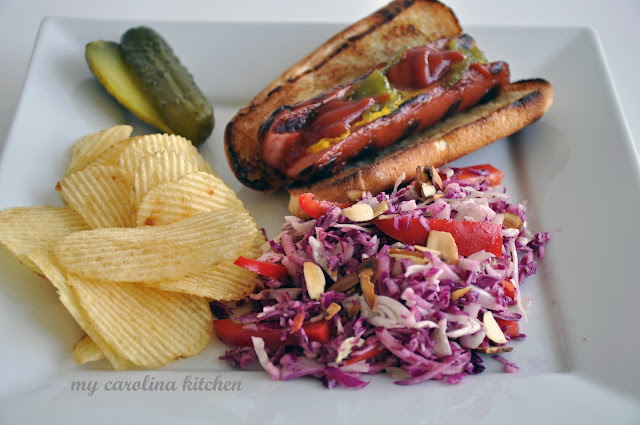 Sunday is the 4th of July here in the United States and all across the land people will be celebrating with picnics and firecrackers. I’ve made a rather non-traditional coleslaw that I call Firecracker Coleslaw in honor of the holiday. It contains red bell peppers and toasted almonds that bring an element of surprise to your taste buds, much like firecrackers bring surprises to your eyes. It is a light slaw and contains no heavy mayonnaise, so it travels well. By using two colors of cabbage and the red peppers, the slaw takes on a red, white and blue patriotic theme and is very eye catching.

For a great summer picnic serve the slaw with the traditional meal of hot dogs, grilled hamburgers, BBQ chicken or ribs and chips to your family and friends. Don’t forget the chilled watermelon for dessert. They won’t be disappointed and neither will you. Have a happy and safe 4th of July everyone.

In a large bowl, whisk the vinegar together with the oil, mustard and sugar. Just before serving, add the two cabbages, bell pepper and almonds and toss well. Season with fleur de sel and freshly ground black pepper to taste. Serves six to eight. Easily doubled.