Greetings from Fort Myers, Florida, the City of Palms 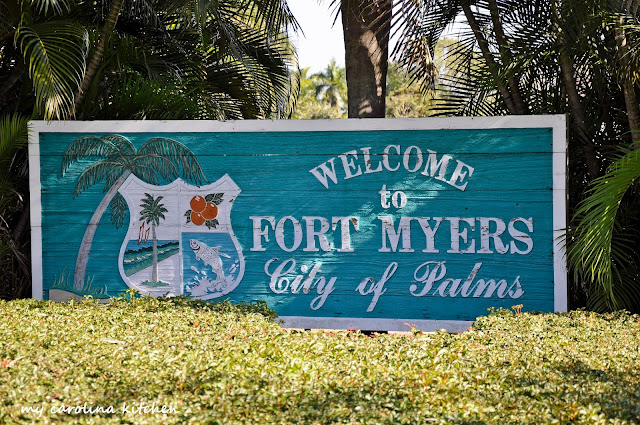 Greetings from Fort Myers, Florida, the City of Palms. Because I haven’t written a post for a while I wanted to check in and say hello. I miss all of you so very much and want to thank those that have written to check on me and to ask how I’m doing. Thank you. Your friendship is one of the greatest pleasures of blogging.

Believe it or not, we’re still in the midst of settling in. Don’t let anyone tell you that merging two completely furnished houses into one is easy – far from it. I still have numerous boxes in the garage yet to be unpacked, including my vast collection of cookbooks (there are no bookshelves in this house – yet, but hopefully we’ll have some soon). To further complicate things, we are planning to rip out and replace our original mid-seventies kitchen and laundry room this spring or early summer and replace them with an up-to-date kitchen and turn the laundry into a butler’s pantry & bar that will include more storage for china & glass. For those of you that have been through this kind of “tear out and replace everything” experience, I know that you’ll understand how busy we’ve been working with various kitchen designers, plumbers, electricians and contractors to find the ones that are right for our job and budget. 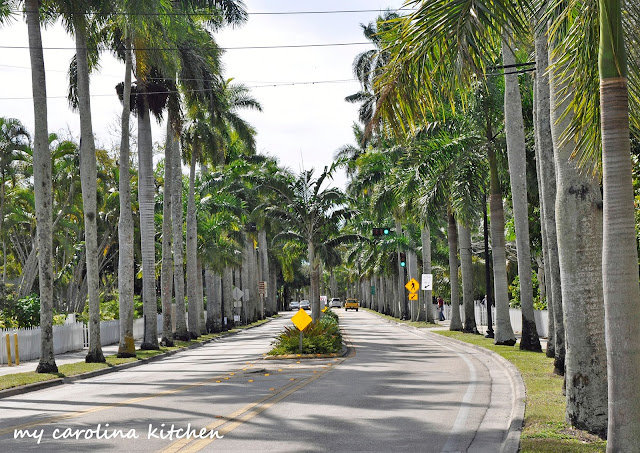 We are enjoying Fort Myers very much. Our home is in Whiskey Creek, an older, established neighborhood off of McGregor Boulevard that includes a golf course and country club. It is very convenient to shopping and nice restaurants. McGregor Boulevard is one of the main arteries in the city from downtown, running alongside the Caloosahatchee River, and is often referred to as the “Grand Dame of Fort Myers.” It is also the route to Sanibel and Captiva Islands and Fort Myers Beach. McGregor Boulevard is lined on both side of the street with lovely old royal palm trees. Because Thomas Edison had a deep respect for nature, he was determined to beautify the Fort Myers area, so he imported and planted the royal palms lining McGregor Boulevard and those palms are how the “City of Palms” nickname came about.

Thomas Edison ("Seminole Lodge") and Henry Ford’s winter home (“The Mangos”) are located side by side on McGregor Boulevard on the banks of the Caloosahatchee River. Long time readers of My Carolina Kitchen will remember my post several years ago that featured Seminole Lodge, Edison’s home, link here. Both the Edison & Ford’s home, including Edison’s laboratory, are open to the public and a do-not-miss when visiting the area. Edison and Ford, along with Henry Firestone, who also had a home here, were generally considered the three leaders in American industry at the time, and often worked and vacationed together.


I’ve long been fascinated with history and more precisely, what role women played in history. Recently I discovered that there 2 women who are responsible for the gorgeous palms that line McGregor Boulevard.

One was Mina Edison, Thomas Edison’s wife. Thomas Edison donated the royal palms along the boulevard from downtown to their estate, but after Edison’s death it was Mina’s efforts that continued the beautiful stately palms that line McGregor Boulevard from the Edison estate to Whiskey Creek, about 3 miles south, where our home is located. Mina Edison had been around famous people all of her life. She gracefully entertained many famous guests such as Presidents Hoover and Wilson, the kings of Sweden & Siam, educator “Black Jack” Pershing and Helen Keller, industrialists Henry Ford, Harvey Firestone and George Eastman. Other guests included Orville Wright, Charles Lindbergh and famed musical artists of the time that Edison had recorded on his phonograph records. 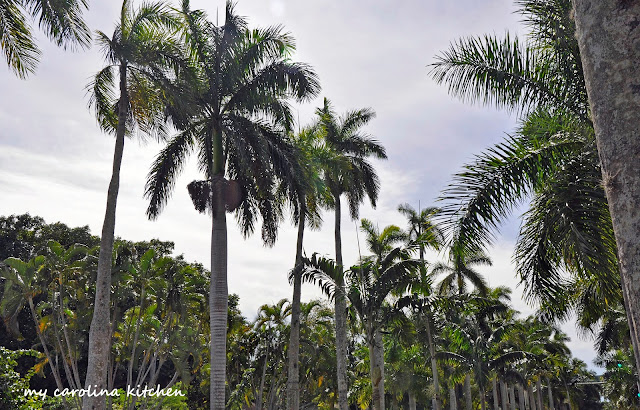 The other is Tootie McGregor, wife of Aston McGregor, a prominent Fort Myers pioneer who became the President of Standard Oil and for whom McGregor Boulevard is named. At Aston McGregor’s death his fortune was estimated at 12 million dollars in today’s economy. Not many people can say they made the world a bit more beautiful, but that’s exactly the legacy of Tootie McGregor. Tootie is considered one of Fort Myer’s founding mothers and is credited for converting Riverside Road, now McGregor Boulevard, from a dirt cattle trail to the elegant tree-lined McGregor Boulevard of today. It was Tootie who continued the Edison's elegant palms from Whiskey Creek all the way to Punta Rassa. Punta Rassa was named by the Spanish Conquistadors in the mid-16th century that unloaded cattle in the area. It was a thriving cattle shipping town in the 1800’s, where cattle would be loaded at the port on ships destined for Cuba. It was one of the home bases for Jake Summerlin, who was one of the wealthiest cattle barons in Florida by the time he reached age 40 and believed to be the first child born in Florida after the land was ceded by Spain. Today the palm lined McGregor Boulevard stretches 14 miles from downtown to Punta Rassa. Punta Rassa fell on hard times and most people today know it to be nothing more than a quaint section on Summerlin Road that links Sanibel Island with the great Fort Myers area.

I hope you’ve enjoyed the history McGregor Boulevard and how Fort Myers became the “City of Palms.” Of course the Edison’s and McGregor’s contributed much much more to Fort Myers that I’ve covered today, but we drive along McGregor Boulevard almost every day and I always think of Mina Edison and Tootie McGregor when I see the magnificent palms that grace the old boulevard. 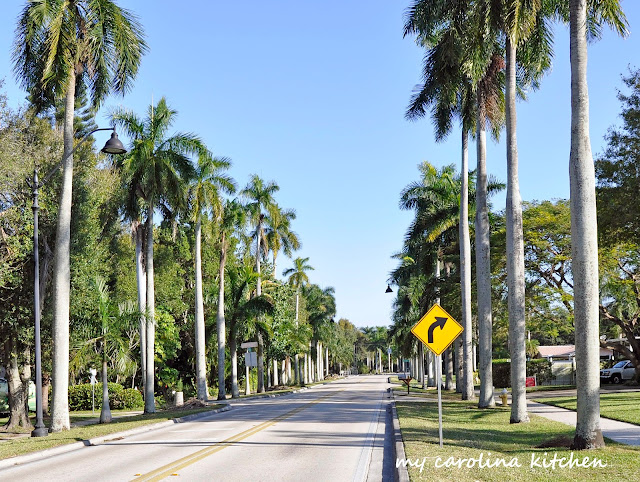 To close with a bit of trivia, with almost 1100 patents to his credit, Thomas Edison has been dubbed “America’s prolific inventor.”  We all know his achievements include the electric light bulb, phonograph, movie camera & projector and the ticker tape machine. However, you might not know some of his lesser known inventions - wax paper, tin foil and mucilage, the “sticky stuff” that is affixed to postage stamps, envelopes, and labels.

Have a nice weekend everyone and thanks for stopping by My Carolina Kitchen.