An Updated Version of Boeuf Bourguignon 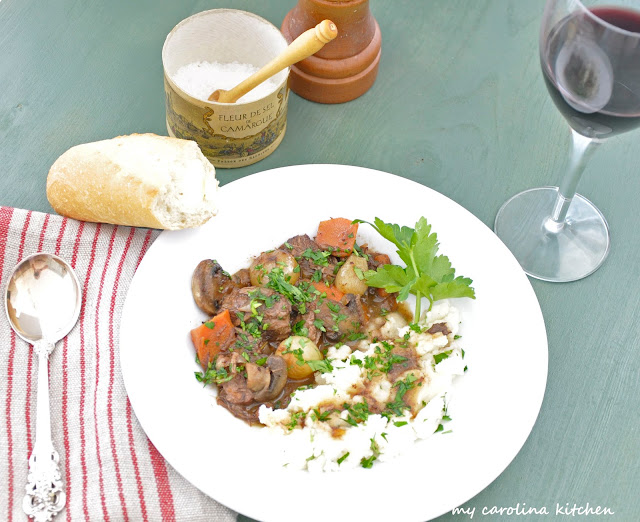 Last weekend we served one of our all time French favorites for cool weather - Boeuf Bourguignon and found it necessary to update the recipe a bit from my 2014 post, link here.

The original recipe calls for beef chuck, but we found that it took much longer to cook the beef chuck (a couple of hours longer) to reach the tender stage. In fact it took so much so that we had to remove the carrots so they didn’t turn to mush. So we went back to our old standby cut of meat for braises – bottom round. 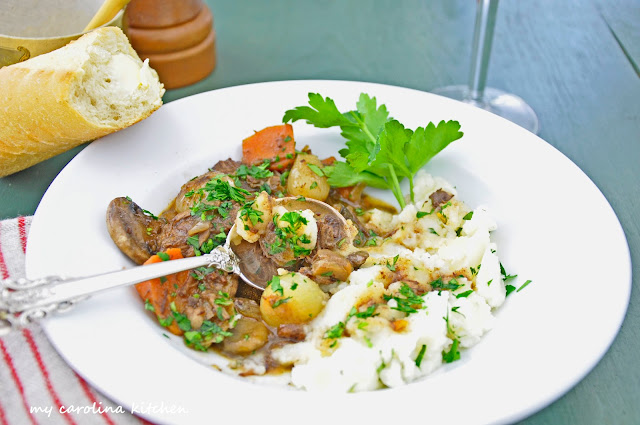 Another change that I made is one that I find can trip up even some seasoned cooks. When a recipe includes cooking instructions in the list of ingredients (which the onions did), it’s easy to forget that when you’re deep in to preparing the recipe and can throw you off when you are supposed to add that ingredient.  So I’ve re-written the recipe to include cooking the onions in the instructions, not in the list of ingredients.

Be sure to read the cook’s notes before purchasing the bacon. The original recipe called for smoked bacon and some smoked bacon can be heavily smoked and that is not the kind of bacon the French would use in their Beef Bourguignons. Most often they use lardons in their braises and are very easy to find in most French supermarkets. Braised dishes such as this always taste better the next day, so if you have time, leave it in the refrigerator a night or two  so the flavors can meld. 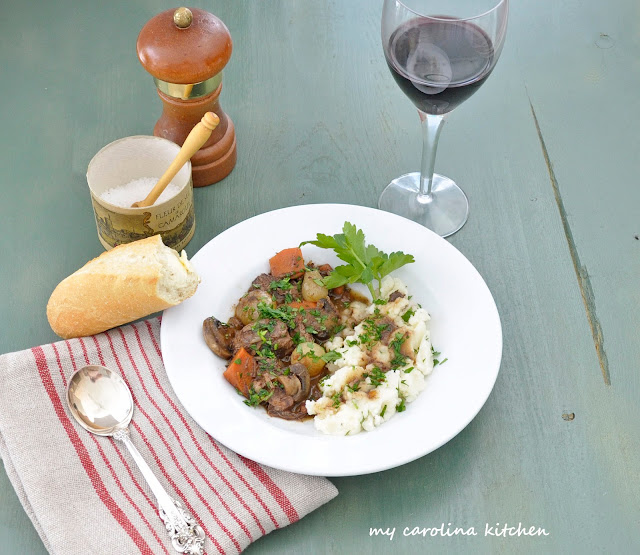 We chose to accompany our Bourguignon with mashed potatoes instead of the toasted country bread the original recipe called for. Noodles are also excellent.

French braise such as this is an excellent serve-yourself dish during the Super Bowl or for an open house. Just use one of the pretty braisers such as La Creuset of Stab and have it on the stove filled with the bourguignon gently simmering alongside mashed potatoes or buttered noodles warming in a double boiler over hot water. It’s as simple as that. 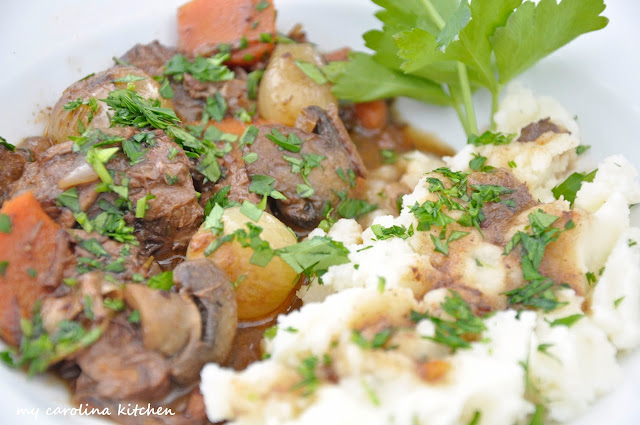 Accompaniment with either:
Mashed potatoes, buttered noodles, or a hardy country bread or sourdough, toasted or grilled and rubbed with garlic clove

Preheat the oven to 250 degrees F. Heat the olive oil in a large Dutch oven. Add the bacon and cook over medium heat for 10 minutes, stirring occasionally, until the bacon is lightly browned. Remove the bacon with a slotted spoon to a large plate lined with paper towels.

Dry the beef cubes well with paper towels, then sprinkle them with salt and pepper. In batches in single layers, sear the beef in the hot oil for 3 to 5 minutes, turning to brown on all sides. Remove the seared cubes to the plate with the bacon and continue searing until all the beef is browned. Set aside. Toss the carrots and the sliced onions in the fat in the pan, season with salt and freshly ground black pepper, and cook for 10 to 15 minutes, stirring occasionally, until the onions are lightly browned. Add the garlic and cook for 1 minute more. Remove the pan from the heat and add the cognac. Stand back and ignite with a match to burn off the alcohol. (You can add up to ½ cup of cognac if you wish).

Put the meat and bacon back into the pot with the juices. Add the bottle of red wine plus enough beef broth to almost cover the meat. Add the tomato paste and thyme. Bring to a simmer, cover the pot with a tight-fitting lid and place it in the oven for about 1 1/4 hours or until the meat and vegetables are very tender when pierced with a fork.

Time out for a cook’s note: If you wish to prepare this dish in advance, at this point when it cools you can cover it and keep it covered for several days in the refrigerator. We like to skim off the excess fat from the top with a spoon when it’s removed from the refrigerator and still cold. Braises served the next day are always better for maximum flavor.

Combine 2 tablespoons of butter and the flour with a fork and stir into the stew. Add the small frozen whole onions or if using fresh onions, parboil for 30 seconds in lightly salted water, then drain and slip off the skins. Brown the onions in a little butter & olive oil until they take on a bit of color before adding them to the stew. Sauté the mushrooms in 2 tablespoons of butter for 10 minutes until lightly browned and have given off their liquid, then sprinkle with a little salt and pepper and add to the stew. Bring the stew to a boil on top of the stove, then lower the heat and simmer for 15 minutes. Taste and add more salt and pepper if needed. Garnish each serve with a little finely chopped parsley.

Serve with mashed potatoes, or buttered noodles, or over a slice of crusty bread. To serve, toast the bread in the toaster or oven. Rub each slice on one side with a cut clove of garlic. For each serving, spoon some stew over a slice of the bread and sprinkle with some chopped fresh parsley.

Cook’s Notes: The French would not use overly smoked bacon in their Bourguignon. Therefore I suggest that you use a lightly apple wood smoked bacon and stay away from the heavily smoked bacons such as Nueske’s and Benton’s. Both brands are excellent smoked bacons, but save them for a BLT or breakfast. You don’t want your Bourguignon to taste too smoky.

I will be sharing this with Foodie Friday at Rattlebridge Farms & Miz Helen’s Country Kitchen Full Plate Thursday.

Posted by Sam Hoffer / My Carolina Kitchen at 1:00 AM