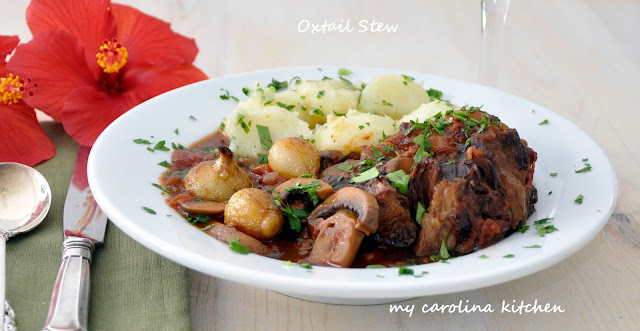 Don’t let the name oxtails scare you just because you’ve never tasted them or cooked with them. We hadn’t either, but we’ve always wanted to try them. So we took the plunge and were extremely pleased with the results. Think the best short ribs you’ve ever eaten, only with more flavor. The sauce alone is reason to make this dish – its flavors are absolutely incredible and your house will smell like a fine restaurant.

Perhaps you've heard your parents or grandparents mention oxtails. During the Depression they were a cheap cut of beef, but sadly that's no longer true. Trendy chefs such as Jamie Oliver have discovered them, so oxtails are no longer the inexpensive cut they were back in the day. You’ll find a link to his recipe below. 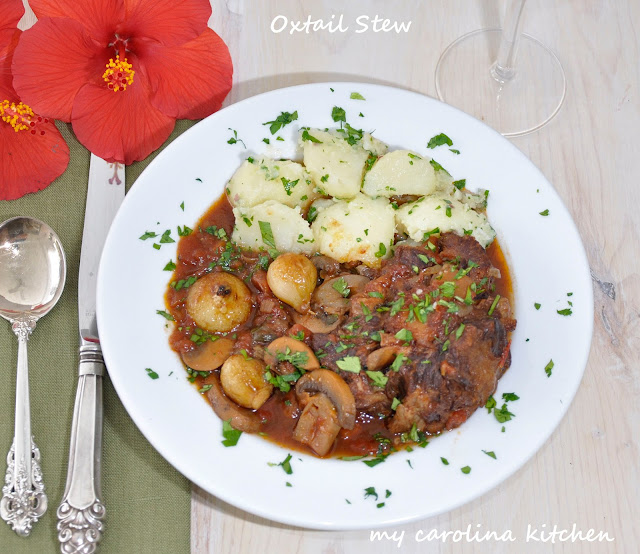 You might ask “what is an oxtail?” Simply put, it is the tail of the cow, but originally it came from the tail of an ox. The tail is skinned and cut into sections, leaving a tailbone with marrow in the center. Here's a link to Wikipedia for more information of oxtails. We were able to find oxtails easily at our supermarket and learned that they routinely stock them. Although the raw oxtails don’t look like they have much meat, you will be pleasantly surprised to find when cooked that they have plenty. The oxtails pictured below are a little smaller than the ones we used. The ones we used weighed about 3/4 of a pound each. Ours had enough meat that one oxtail served both the two of us, but I would count on 1 per person to be on the safe side.

The meat requires a long time to cook, making it perfect for long braises. The dish should be made in advance because, as with any braise, it tastes better the next day and also it gives you the chance to remove any fat that rises to the top.

We watched Jacques Pepin add a couple of bone marrow bones to one of his braises the other night on his television so we decided to add a couple to our oxtail stew. It’s just another way of adding more flavor without much effort on your part at all and we will try it with more meat braises in the future. If you find, as we did, that your sauce is a little thin, it thickens nicely with an arrowroot and water slurry.

Give oxtails a try. I don’t think you will be disappointed; we certainly weren’t. If you happen to have any left-over sauce, it is wonderful over mashed potatoes or grits. 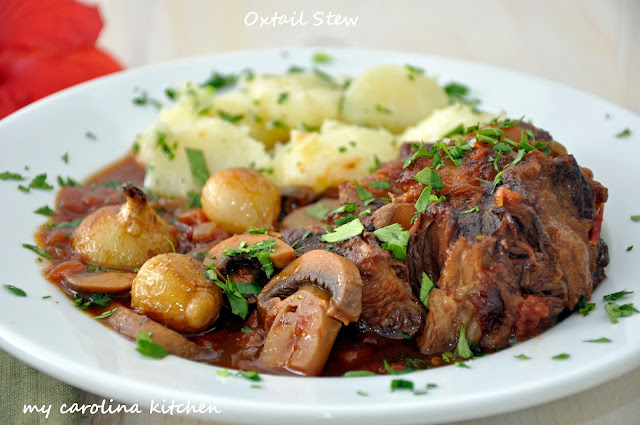 Wash oxtails thoroughly and dry them on a towel. Generously salt and pepper them, then dredge in flour. Add bacon fat to a heavy iron skillet and heat to medium high. Add oxtails and brown on one side for 5 minutes, then using tongs, turn over and brown the other side for 5 minutes. Remove to a plate and reserve. Turn the heat to medium low and add carrots, celery, onions and cook, stirring occasionally until they began to soften. Add garlic and saute about 2 minutes more, taking care not to let the garlic burn. Salt vegetables and transfer them from the iron skillet to a braiser or large Dutch oven.

With your hands or a small knife, break apart the tomatoes and add them along with their juices, the bay leaf, thyme, and 2 tablespoons chopped parsley, ground cloves, and the bone marrow bones to the vegetables.  Sprinkle with a little salt and pepper then add the previously browned oxtails and enough beef bouillon and dry red wine in equal parts to cover the mixture. Slowly bring the whole mixture to a boil, then cover and transfer to a lower shelf in a preheated oven and let it cook for 2 hours.

While the oxtails are cooking in the oven, heat about 2 cups of lightly salted water in a sauce pan and when boiling, add the pearl onions and parboil for 30 seconds, then drain in a strainer and slip off the skins. Brown the onions in a little butter & olive oil until they take on a bit of color, sprinkle with a little salt and pepper and set aside.

At 1 ½ hours, check the oxtails to see if they are almost done. If not, cook for another 30 minutes and, if the meat isn’t almost falling off of the bone, continue to cook until its does so. When the meat is very tender, add the mushrooms and browned pearl onions and continue to cook gently in the oven for another 30 minutes. Remove, let the stew cool to room temperature, then cover and refrigerate overnight. It can be kept covered in the refrigerator for up to four days.

Before serving, skim off the fat with a large spoon and discard. Bring the stew to a boil over medium heat and judge whether the thickness of the liquid is to your liking. (Personally, we don’t like a thin sauce, but it’s up to you.) If you wish to thicken it, stir together equal amounts of arrowroot and water (we used 1 tablespoon of each, you may need more) in a small bowl to make a slurry, then add to stew. Stir the stew until the slurry is incorporated and the stew thickens. Remove the bay leaf and bone marrow bones. With a spoon, scoop out the soft insides of the bone marrow and add back to the stew, then discard the marrow bones. Heat about 3 tablespoons of brandy in a large ladle, then set the liquor alight and sprinkle the flaming brandy over the contents of the stew. Stir after the flames go out to fully incorporate.

Serve 1 oxtail to each guest in large individual bowls, generously spoon some sauce over them and sprinkle with a bit of finely chopped parsley. If you wish, you can remove the meat from the bones and discard the bones for each guest. Serve the stew with either buttered parsley potatoes or hot cooked noodles.

This will be shared on Foodie Friday at Rattlebridge Farms and Miz Helen’s Country Kitchen Full Plate Thursday.

Have a nice weekend and thank you for visiting My Carolina Kitchen.


Posted by Sam Hoffer / My Carolina Kitchen at 1:30 AM

Email ThisBlogThis!Share to TwitterShare to FacebookShare to Pinterest
Labels: Beef