An interesting story surrounds the origin of pasta primavera. Ed Giobbi, in his cookbook Eat Right, Eat Well – The Italian Way says, “I feel that something should be said about “pasta primavera,” perhaps the most popular pasta recipe in America today and certainly the most misunderstood. I would like to emphasize that the pasta primavera that is so popular in American today is not of Italian origin, but was created in Le Cirque restaurant.”

One of Ed’s claims to fame is that he invented the now well-know dish pasta primavera. Ed tells the story that in 1973 his good friends Chef Jean Vernges and restaurateur Sirio Maccioni visited his home to see if he would contribute a pasta recipe for their new restaurant, Le Cirque, in New York City. He put together a favorite pasta dish of his, “Pasta Primavera,” which was then unknown in New York City. It was a beautifully simple dish of unrefrigerated garden-ripe tomatoes cut into cubes, freshly chopped fresh basil and Italian parsley, very good olive oil, finely chopped garlic, salt, and freshly ground black pepper. and served it over spaghettini.

It turns out that the simple spaghetti dish with garden-ripe tomatoes that Ed whipped up that day for his friends was the forerunner of one of the most popular dishes in America – Pasta Primavera. 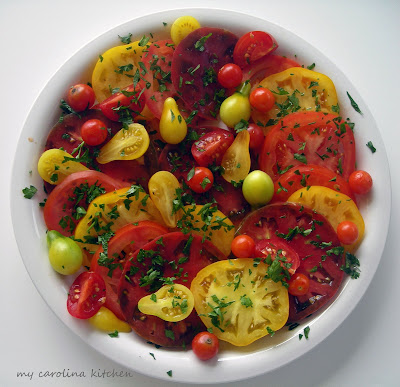 When New York’s Le Cirque opened in 1976 and popularized pasta primavera, Craig Claiborne & Pierre Franey called it “by far the most talked-about dish in Manhattan.” However, at least two other people other than Ed Giobbi have laid claim to its creation. In his memoir, Le Cirque’s owner Sirio Maccioni gave credit to his wife, and Chef Jean Vergnes, who doctored Giobbi’s version with cream and vegetables for the 4 star restaurant. It’s interesting to note that despite Chef Vergnes’ claim of inventing pasta primavera, he was said to hate it so much that he forced his cooks to make it in the restaurant’s hallway. Here is Le Cirque’s pasta primavera recipe, including all 10, as the New York Times calls them, pain-in-the-neck steps.

I have made Ed Giobbi’s original simple pasta primavera using three different colored vine ripe, locally grown heirloom tomatoes. & homegrown if you have them. In his cookbook Ed gives three recipes for pasta primavera. In one he recommends blending the tomatoes in a food processor so the spaghetti will be easier to twirl with your fork and at the same time pick up some of the tomatoes and basil. If you want to make it easier to eat, use any ordinary garden fresh tomatoes instead of the heirlooms. In my opinion whirling precious heirloom tomatoes in a food processor would be akin to putting a Chanel suit in the washing machine. 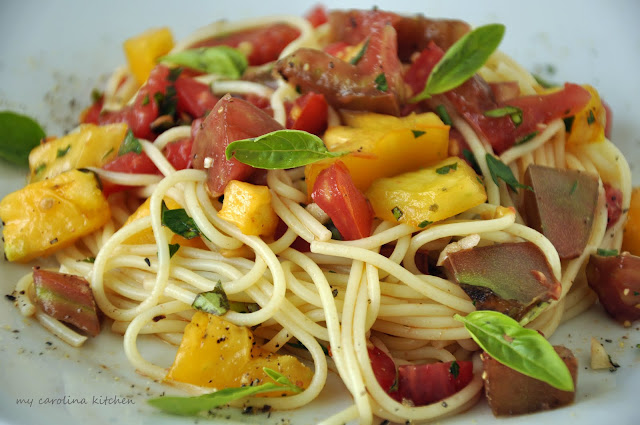 Ed Giobbi’s Pasta Primavera with Heirloom Tomatoes
Adapted from Eat Right, Eat Well – The Italian Way by Edward Giobbi –Serves 2, easily doubled - use homegrown tomatoes if you have them

In the meantime, cut the tomatoes into slices parallel to the stem and discard the stem. Cut the tomato slices into ½” cubes and place in a colander to drain. About 2 to 3 minutes before the pasta is done, place the drained tomatoes in a large bowl with the remainder of the ingredients and stir very gently. Be sure to treat the heirloom tomatoes with care. They tend to bruise easily.

When pasta is cooked al dente, drain well by shaking the pasta in a colander so that all of the water drains off. In a large bowl, toss the hot spaghetti with the raw tomato sauce and serve immediately. Pass additional Fleur de Sel and freshly ground black pepper at the table.

Cooks note: Only make this when tomatoes are at their peak of freshness.

Drop by and sample all of the goodies. You won't be dissappointed.
Posted by Sam Hoffer / My Carolina Kitchen at 6:05 AM

Email ThisBlogThis!Share to TwitterShare to FacebookShare to Pinterest
Labels: Pasta