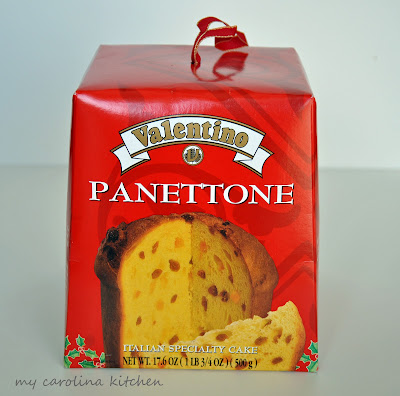 Panettone is classic Italian sweet, fruity bread traditionally enjoyed around Christmas time. We resist opening our pretty red box until we are ready to use it, because for some mysterious reason, slices seem to disappear and no one knows what happened to them. One theory is that Santa’s elves sneak into our house during the night and help themselves to a slice while we sleep. Seriously, pannettone is that good and I promise that you can’t stop eating it once you start. Consider yourself warned.

There are many stories regarding the origin of panettone (and none include Santa’s elves sneaking snacks.) My favorite is a romantic tale of two lovers and special bread.  In Milan there supposedly was a baker named Toni who had a beautiful daughter. A young man who worked for Toni in the bakery wanted to marry his daughter. To win Toni’s approval, the young man created special sweet bread filled with fruits and other rich ingredients. The special bread the young man created made Toni’s bakery famous and people began to call the bread “pan ad Toni.” Needless to say, Toni became rich and allowed the young man to marry his daughter.

Panettone, pronounced pænəˈtoʊni, originated in Milan and the word “panettone” is derived from the Italian word “panetto,” meaning small loaf bread. The suffix “one” (pronounced “o-neh”) changes the meaning to large bread. During the Christmas season, Italians eat pannettone for breakfast with coffee, between meals with Marsala wine, and after dinner with spumante.

The fragrant, scented panettone dough, rich in butter, eggs, raisins and candied fruit, is raised naturally in special paper until it reaches the traditional famous rounded shape. If you’d like to make your own panettone, here’s Mario Batali’s recipe from a Food Network television special - An Italian Christmas with Mario Batali and Giada DeLaurentiis. I prefer to purchase my panettone and I was thrilled to learn recently that you can buy it year around in some Italian markets.

This recipe is a gussied up version of French toast using pannettone topped with cinnamon and bananas. The Grand Marnier is my addition. You could leave it out, but I think it gives the dish elegance and a little French ooh, la, la. Who couldn’t use a little French ooh, la, la in their life? This would be perfect for a Christmas day breakfast or a treat for yourself on a snowy morning when you sleep late and want to feel pampered for breakfast.

Put the eggs, cream, cinnamon and 1 tablespoon Grand Marnier in a bowl and whisk to blend.  Pour into a shallow, flat bottom dish, add the slices of pannettone, and let soak for 5 minutes. Turn the slices over and let soak an additional 5 minutes.

Heat 4 tablespoons of butter in a large non-stick pan. When the butter is foaming, drain off the excess egg mixture from the pannettone and add the soaked slices to the pan. Cook for 4-5 minutes on each side or until golden.

Remove the cooked pannettone from the pan and place on a heated serving plate and keep warm in a low oven. Add the remaining tablespoon of butter to the pan and turn heat to medium low. Slice the bananas into the pan along with the 2 remaining tablespoons of Grand Marnier and toss gently for 5 minutes. Spoon the bananas over the pannettone, then drizzle with the honey or maple syrup and dust with cinnamon. Serve hot as soon as possible. Serves 4.

Posted by Sam Hoffer / My Carolina Kitchen at 6:28 AM

Email ThisBlogThis!Share to TwitterShare to FacebookShare to Pinterest
Labels: Breakfast