Our favorite restaurants and a romantic country inn in Highlands, North Carolina


More often than not, we plan our trips around food and my birthday trip was no exception. Our favorite place for lunch in Highlands, NC is Wild Thyme Gourmet. When the weather permits, we enjoy dining outside on the patio.


However, their indoor sun room is cozy when the weather cools off. The Wild Thyme Gourmet is open year-around and offers lunch and dinner, a handy tip to know because many restaurants in the area close during the winter.


One of the reasons we like Wild Thyme is because their chef creates fabulous soups. Meakin chose the fresh tomato basil and I never pass up sampling black bean soup.


For our main course, we normally order their grilled wild salmon BLT sandwich with apple wood smoked bacon and herb mayonnaise, but this time we saw something new on the menu - a Panko fried shrimp sandwich accompanied by a slightly chilled and well seasoned wild rice salad. I would have never thought to put fried shrimp on a sandwich, but it was delicious and the shrimp remained crispy and moist. I love Panko shrimp and when I make it at home, instead of deep frying it, I shallow fry it in a little canola oil and it turns out perfectly every time.


For dinner we made reservations at Wolfgang’s Restaurant and Wine Bistro, which conveniently is right down Main Street from the Highlands Inn, where we’re spending the night. Wolfgang’s has been a fixture in Highlands for seventeen years.


Chef Wolfgang, as you probably guessed from his name, is German, so you might expect that Weiner Schnitzel and a Bavarian sampler of Bratwurst, Knockwurst, Kessler and a Schnitzel with red cabbage, sauerkraut and potato salad would be on his menu.  However you’ll be surprised to learn that he was also a former executive chef for the Brennan Family of Commander’s Palace in New Orleans. So as they say in Louisiana, laissez les bon temps roulez - let the good times roll.


The last time we dined at Wolfgang’s was in the winter and Hungarian goulash soup was on the menu. Meakin asked our waitress to please tell the chef that his soup was delicious and just as good as the Hungarian goulash soup he’d enjoyed in a restaurant in Austria at the Zugspitze. When she returned to the table, he asked, “What did the chef say?” He had a great big smile she said. Apparently Chef Wolfgang was pleased with Meakin’s sense of humor and little tease about Bavaria.


My birthday is a special day for us. If you’re a regular reader you might remember that Meakin proposed to me on my birthday years ago at the romantic Mecom Fountains in Houston. We toasted the occasion with a glass of one of our favorite chardonnays, a buttery Sonoma Cutrer, in the wine bistro and reminisced about all of the fun times we’ve had. It’s most definitely been a good life. Wolfgang’s wine list is excellent and every year since 1999 the restaurant has been awarded the prestigious Wine Spectator Best of Award of Excellence.

Because it was a special occasion we asked to be seated in a cozy corner of the main dining room. I was particularly impressed by their attention to detail. The waitress brought napkins and water glasses to the table right away, which you expect. But wait………my napkin was black. When Meakin asked why I got a black napkin and he got a white one, the waitress said, “The lady is wearing black and a white napkin might leave lint.” Furthermore I was also impressed when I picked up my water glass and found that the foot of the glass was fitted into the doily (not sitting on the doily, but in a slot in the doily), allowing it to protect your clothing from the annoying drips common to water glasses after they’ve sat on the table a few minutes.


I never pass up a chance to enjoy Creole cuisine and tonight was no exception. From Chef Wolfgang’s Signature Specialties menu I chose the Veal Medallions Wolfgang with a cabernet sauce topped with sautéed crawfish and béarnaise sauce. When I took my first bite, I was immediately transported to Louisiana and the French Quarter.

The veal was melt in your mouth tender, as I expected in a quality restaurant such as this, and the béarnaise was creamy and rich, with just a touch of tarragon as a background note. In my opinion, the quality of sauces a chef turns out of his kitchen tells you much about his training. A good sauce spells a good chef, one that has been classically trained in fine cooking. Chef Wolfgang didn’t let me down with his béarnaise sauce or his tender, properly cooked veal.

At home (when our waistlines can stand it), I make both homemade béarnaise and hollandaise sauce. Even if you are a beginner, they’re quick and easy to make if you use my blender method. There’s no excuse to buy the packaged stuff, so email me (samhoffer (at) gmail (dot) com) if you want my easy, foolproof recipe for béarnaise or hollandaise sauce.

Meakin took the more traditional route and ordered a well aged and marbled 12 ounce New York strip, cooked rare the way he likes it, and topped with béarnaise. For a starter he let me have a taste his shrimp and lobster bisque, which was some of the best bisque I’ve ever had. Chef Wolfgang came by our table and visited for a few minutes, which is also a sign of a top quality restaurant.

I know by now you must be saying to yourself, “Where are the pictures of the food?” Well, in all honesty, we’re a little shy about taking photos in restaurants. It’s like ringing cells phones and misbehaved kids. We don’t want anything to spoil the pleasure of dining.  Maybe someday we’ll get braver. We did manage to sneak a few food photos from Wild Thyme, but that was a much more casual setting.

On our departure Wolfgang’s gave me a small box of beautiful handmade chocolates for my birthday from Kilwin’s, whose store has been on Main Street for as long as I can remember.


We spent the night at the Highlands Inn, built in 1880 and is on the National Historic Register.

Meakin chose one of their historic rooms, number twenty-two to be exact. He was told by the innkeeper that “everyone loves room twenty-two,” so who could resist?

It was filled with authentic antiques and lived up to its reputation as a very romantic room. Before dinner we relaxed on the balcony with our feet up, watching life go by on Main Street below.


These lovely flowers from Meakin were waiting for me in our room when we arrived.  As a surprise, he had asked the Inn to arrange for a local florist to send over this gorgeous bouquet. I had no idea how fragrant lilies were. 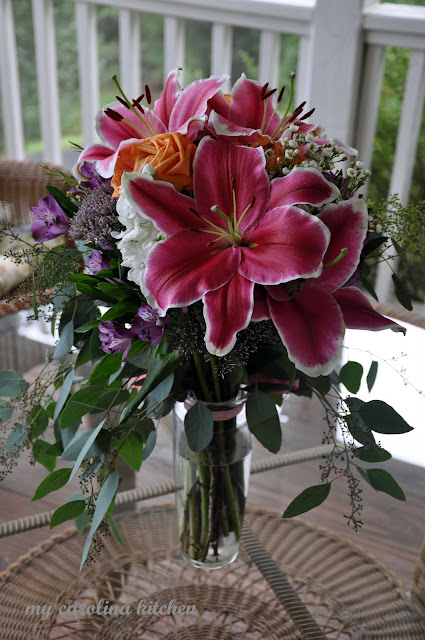 The next morning we enjoyed a complimentary breakfast downstairs in the Inn’s Kelsey Restaurant. The dining room has a comfy, at home feeling with mismatched, old arrow back chairs around the tables and more lovely antiques scattered about.


The breakfast was a typical hardy southern one, but today they were featuring rustic homemade biscuits (nothing out of the can here) with a rich cream gravy, French toast with pralines, and one of my favorites – Potatoes O’Brian. After all the rich food I indulged in last night, I filled my plate with fresh fruit, but I couldn’t resist just a tiny taste of the potatoes – delicious, with just the right amount of red bell peppers and onions.

This was a fabulous romantic trip that lived up to its expectations. The only downside is now that we’re home, we’ll have to go on a diet.
Posted by Sam Hoffer / My Carolina Kitchen at 4:06 PM