Highlands, North Carolina - high in the mountains where cool mountain air and natural beauty meet Mother Nature at her finest

Meakin asked me what I wanted for my birthday last week and before I could even think, the words, “I’d like to go to where I don’t have to cook or plan meals.” popped out of my mouth. “Perhaps a romantic country inn.”


“Any place special?” he asked. “How about driving over to Asheville to tour the Biltmore Estates and spend the night in their inn. We could “vacation like a Vanderbilt,” as their ad says, or had you rather go to Highlands?” Somehow he didn’t seem surprised when my eyes lit up at the word “Highlands.” It’s one of our very favorite places to visit and we’ve been going there since the mid-seventies when his mother owned a summer home at the Highland Falls Country Club. Later when we lived in the islands, we came to Highlands during the month of September and rented a cottage within walking distance to downtown in the Mirror Lake area to escape the peak of hurricane season and the sweltering summer temperatures of the Bahamas.

Mirror Lake
Private dock with canoe on Mirror Lake
We love living in the mountains of western North Carolina where there are many charming nearby villages located in lush forests, some with scenic river gorges, gorgeous natural waterfalls, and romantic country inns, which describes Highlands perfectly. 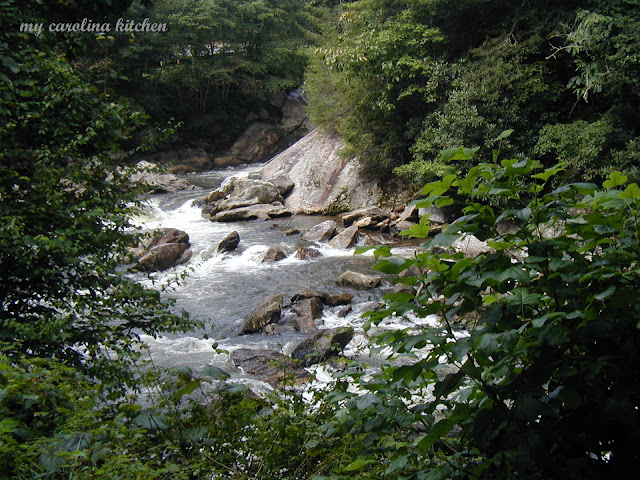 Cullasaja Gorge
All roads leading into Highlands are windy and steep. Here’s a photo from a scenic overlook just before we got to Franklin, NC, one of the gateway towns to Highlands. Can you see the road below?

That’s Highway 64, which will eventually turn into a very narrow, two lane road (treacherous in places) that will wind its way through the Cullasaja Gorge in the lush green Nantahala National Forest from Franklin to Highlands. This is a typical day here when the mountains in the distant look blue – hence the name the Blue Ridge Mountains. 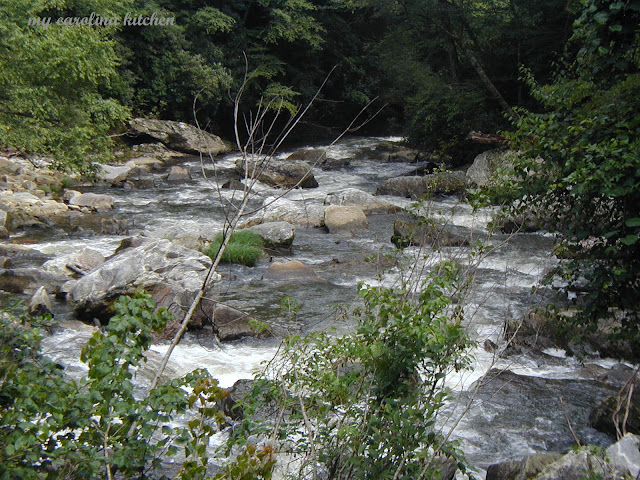 Cullasaja Gorge
There are numerous beautiful, natural waterfalls throughout the Highlands area, but our favorite is Dry Falls, or the Upper Cullasaja Falls, on this road into town.

Dry Falls on the Cullasaja River

It is a 65 foot high waterfall that flows over a huge overhanging bluff that allows visitors to walk under the falls without getting wet, hence its name. Here Mother Nature shows off her finest.

Dry Falls on the Cullasaja Rier
Highlands, North Carolina is special for many reasons, but perhaps it’s best known for its elevation. Located in the Appalachian Mountains with an elevation of just over 4100 feet, it’s cool in the summer when everywhere else in the south is hot, hot, hot. In August the average high temperature during the day is 78 degrees and some nights it can dip down into the mid-fifties. I recall Meakin’s mother having a fire in her fireplace many evenings in the summer and everyone waking up to nippy weather in the morning and needing a sweater.


Downtown is small and charming, filled with antique shops, a well-known auction house (where Meakin’s mother bought the oriental run that now graces our living room), art galleries, and plenty of jewelry stores filled with top quality knock-offs to the real stuff.


There’s also a well stocked cookware shop, The Dry Sink that I never miss peeking into, and numerous clothing stores and upscale boutiques that carry fashionable resort wear for every taste. If you like to hike or fish, there are shops that can outfit you from head to toe. 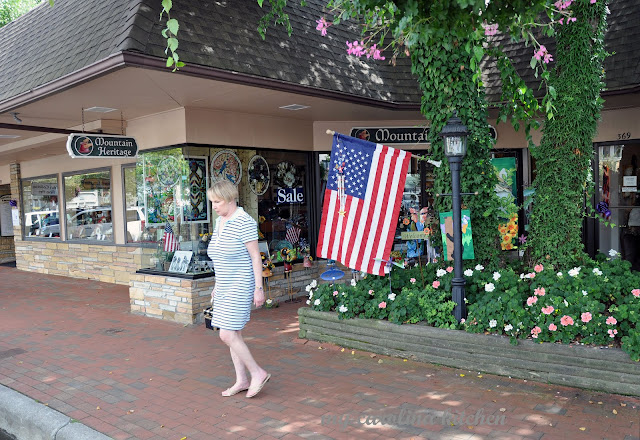 Several downtown buildings are on the National Register of Historic Places, including century old churches, and numerous country inns offer a variety of European style amenities while others including fireplaces in the rooms.

But best of all (and this is one of the reasons we came), there are some very nice restaurants. 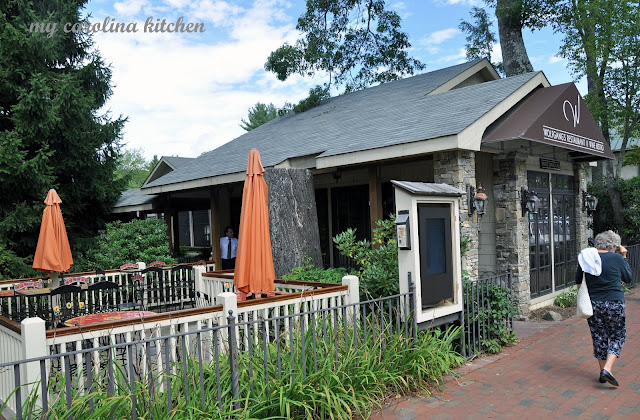 For history buffs, the Cherokee Indians and Spanish explorers, such as Hernando Desoto, were some of the first to discover the area. Local legend has it that in 1875 the founders of Highlands drew one line from Chicago to Savannah and another from New Orleans to Baltimore. They thought where the two lines met (Highlands) would become a great trading center and commercial crossroads. Although not a commercial center, today Highlands is one of the most popular mountain playgrounds in the south where wealthy second homeowners and tourists continue to return to escape the summer heat and enjoy all of the resort style amenities that upscale mountain life has to offer.

Highlands became a golfing mecca in the thirties when the golfing great Bobby Jones brought some of his well-heeled buddies up from Atlanta and founded the Highlands Country Club. Today Highlands is still a golfing paradise with numerous upscale golfing communities and courses with breathtaking views of the mountains and scenic waterfalls. The abundance of natural beauty and an ideal climate make outdoor activities very popular here, such as fly fishing, hiking and mountain biking, canoeing on the pristine lakes, and river rafting.

We spent the night at the Highlands Inn in one of their romantic historic rooms on the second floor with a lovely balcony overlooking Main Street. I hope you’ll join me next time when I’ll show you around this charming old inn built in 1880 and take you along to two of our favorite restaurants in Highlands.

Posted by Sam Hoffer / My Carolina Kitchen at 4:05 PM