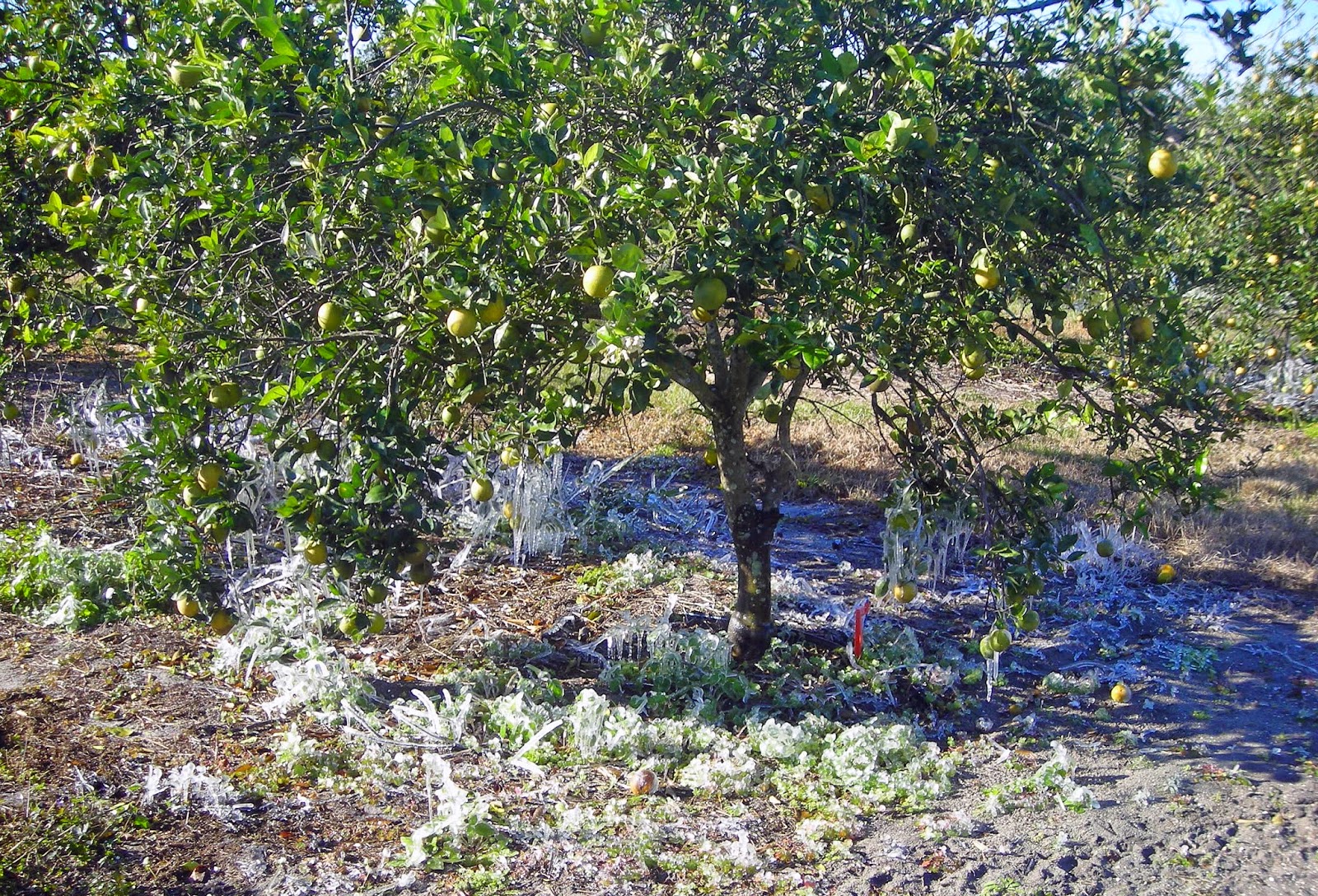 We’re currently at our little “home away from home” in Ft. Myers, Florida. Our plans were to escape the cold weather at home and enjoy some of Florida’s typical balmy days. So far that hasn’t happened but the weather seems to be improving today. As you’ve seen in the news, it’s been very cold in Florida with temperatures dropping into the low thirties for several nights, which caused great alarm to the citrus growers and farmers of the area and upset my husband because it killed his freshly planted basil and some of the shrubbery.

Yesterday we were suffering from cabin fever so we drove from Ft. Myers, which is in southwest Florida on the Gulf of Mexico to Stuart on the east coast on the Atlantic Ocean just north of Palm Beach – about a three hour drive. Our route on Highway 27 and 80 east took us along the orange groves and sugarcane fields in Florida’s Heartland, a place likely you haven’t been and you won’t find it in the tourist guide books. Above is an orange tree in a grove along the way. Notice the ice under the trees. We’ve seen on the nightly news that growers have sprayed their trees with water to help prevent damage to the fruit. 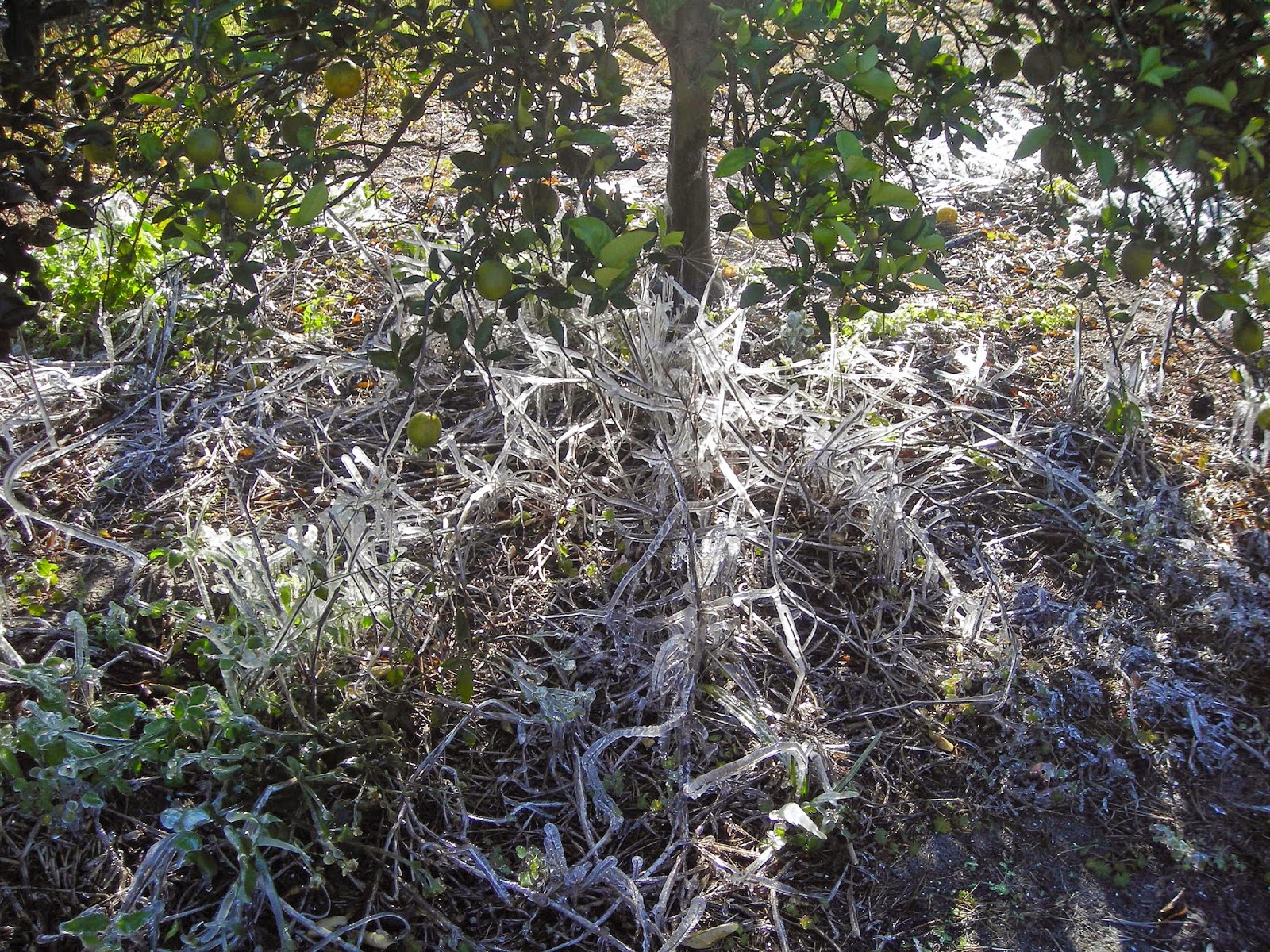 Ice at base of orange tree

We drove through the small towns of Clewiston, South Bay, Belle Glade and Pahokee, through the sugarcane fields along the southern tip of Lake Okeechobee. Even though Belle Glade and Pahokee are in western Palm Beach County, it’s not the ritzy Palm Beach of Donald Trump, famous stars and Carmine’s Gourmet Deli that we visited last week. This part of Palm Beach County is referred to as “Muck City,” according to Wikipedia, due to the large quantity of muck in which sugarcane grows. About half of the sugarcane in the nation is grown in the plains around Belle Glade and Clewiston. This area is more associated with the Florida Heartland than south Florida. According to the Florida Plants website, the sugarcane area is so compact that most Florida visitors never see a sugarcane field so we took some pictures of the various stages of the sugarcane’s growth. 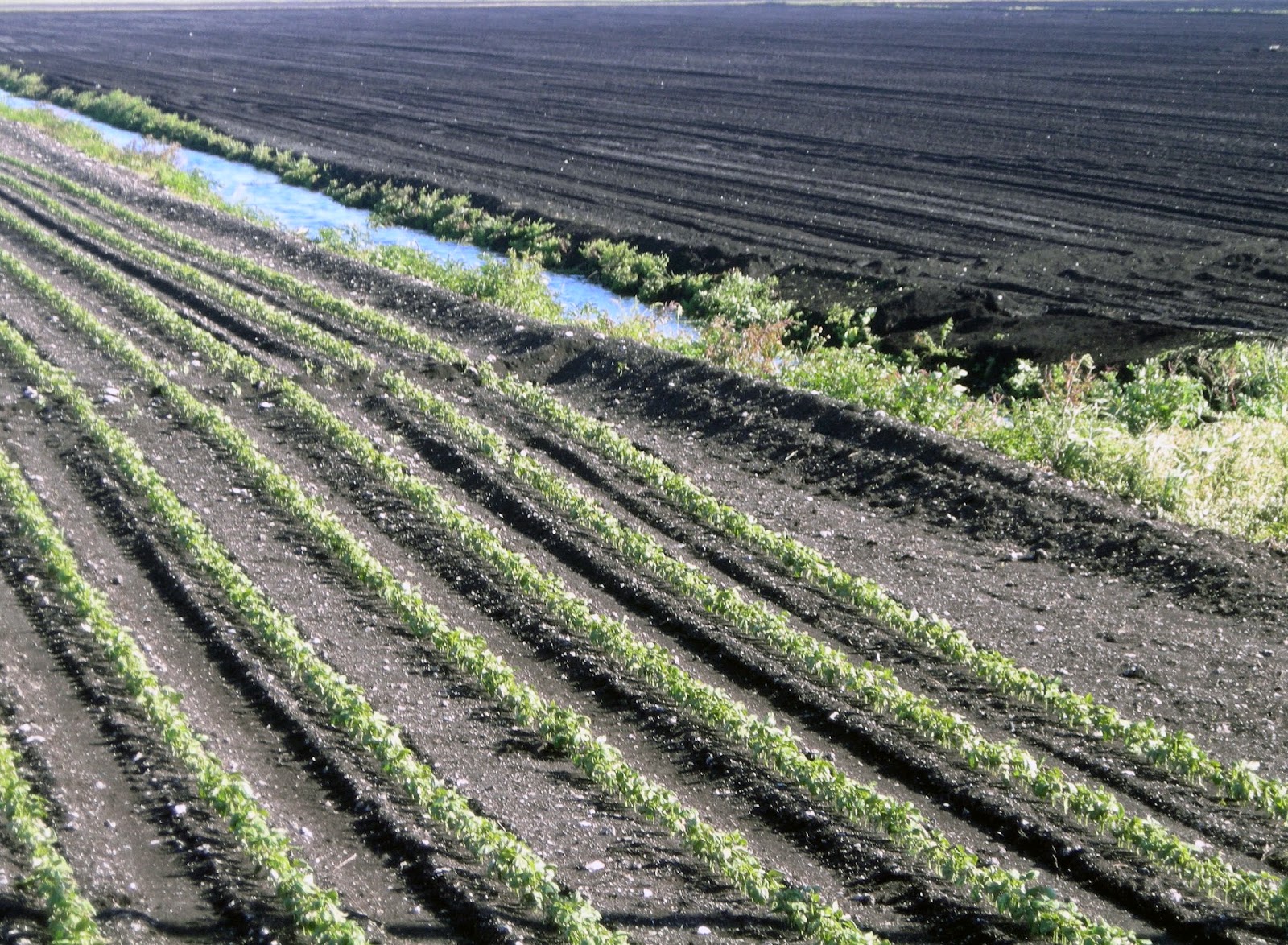 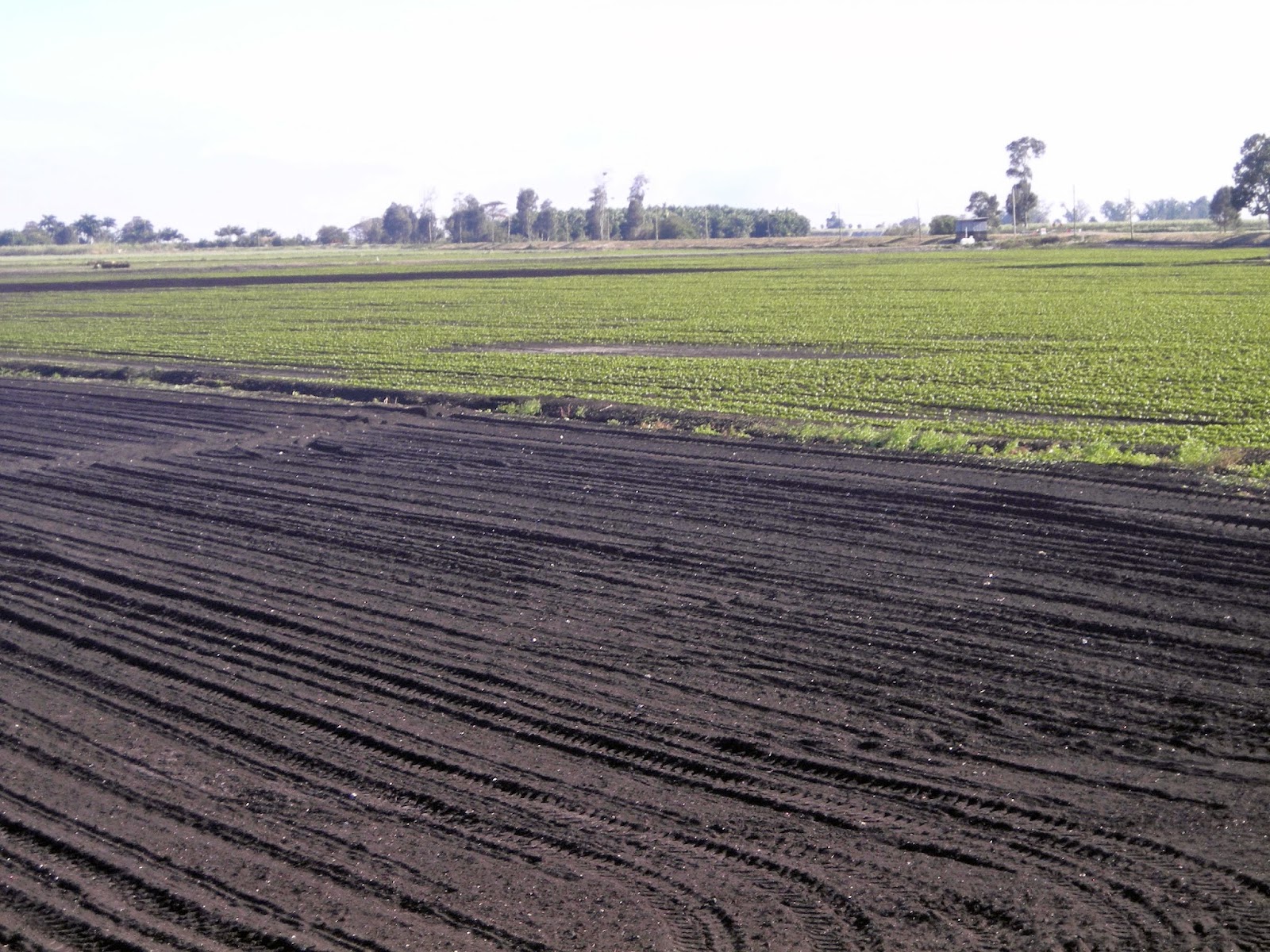 We took pictures along the way of the various stages of sugarcane fields. The fields are replanted every two to four years. Notice the little plants coming up in the coal black earth known as muck. 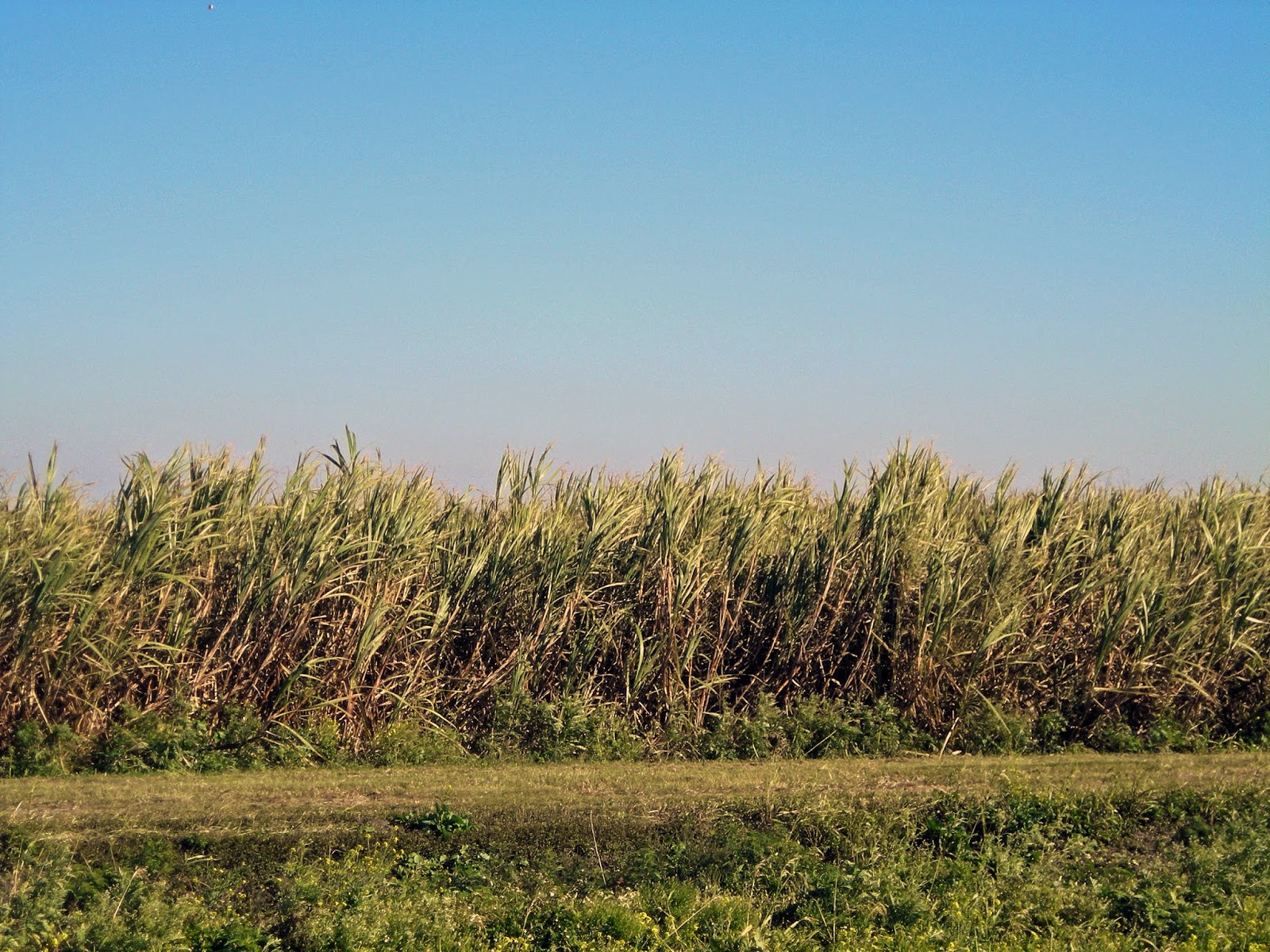 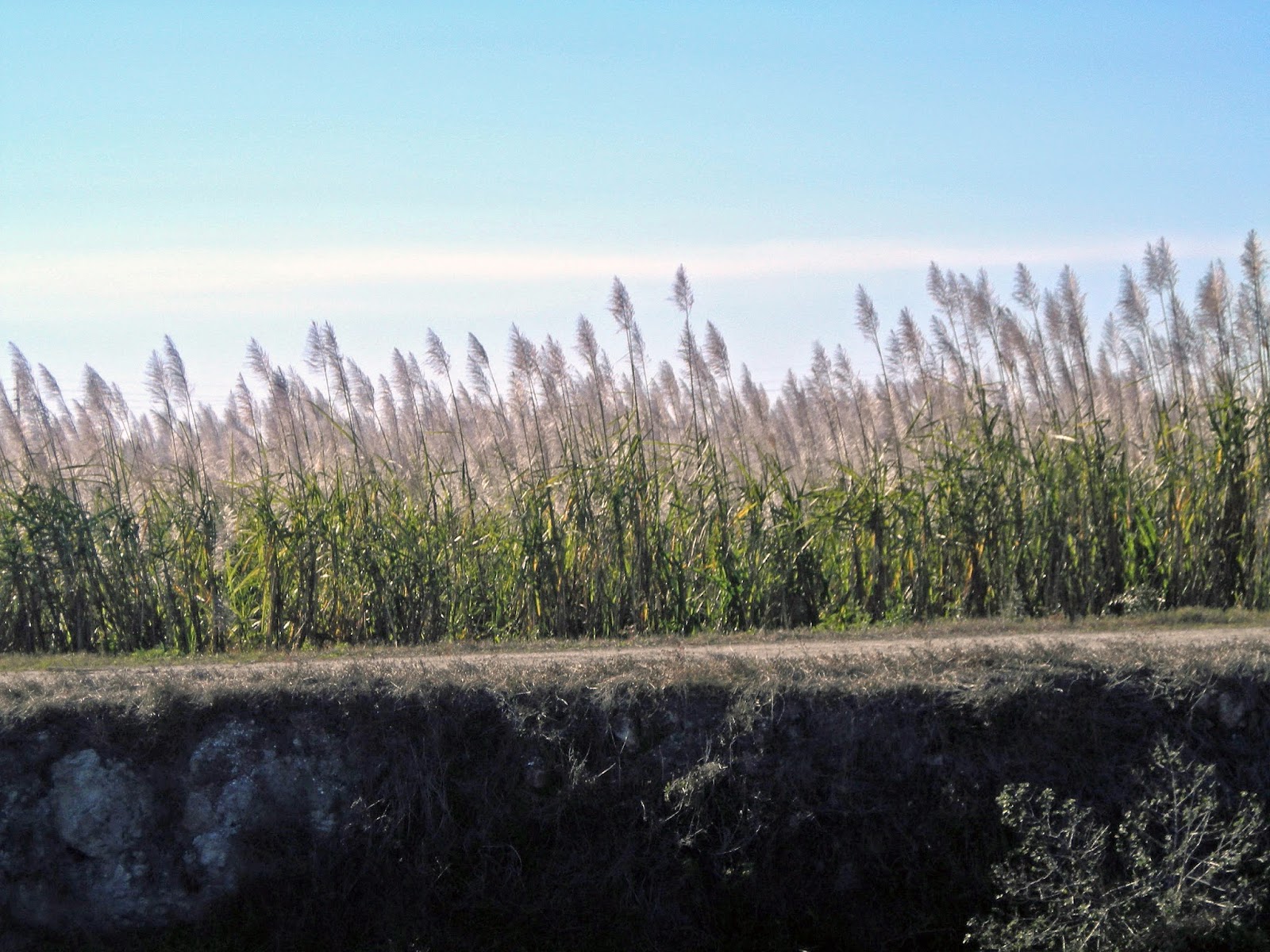 Sugarcane is a tropical grass native to Asia and the plumes you see here blowing in the wind are the flowers and seed heads of the cane plant. Each plume contains several thousand tiny flowers and each flower is capable of producing one seed. The cool winter weather in Florida ordinarily prevents the development of the seeds. Sugarcane is harvested from late October through mid-April. Florida is the largest producer of sugarcane and there are two sugar refineries here, one in South Bay and the other in Clewiston, which their Chamber of Commerce calls “America’s sweetest town.”

The Florida Plant website attributes the fertile organic soil and warming influence of Lake Okeechobee as the primary reasons the sugar industry is located here. The cane fields run along the south side of the lake and the built-up dikes. 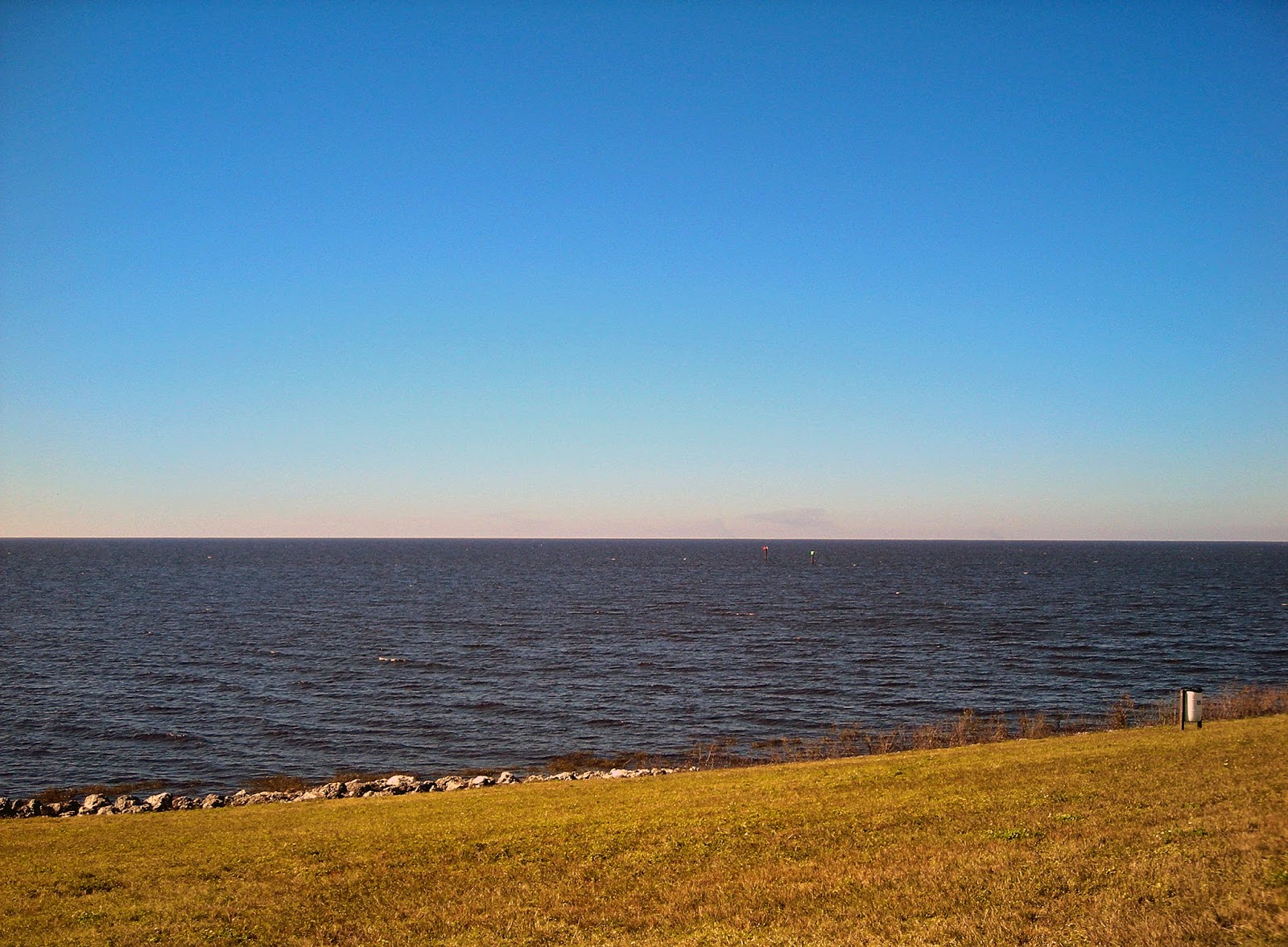 Locals call Lake Okeechobee “The Lake” or “The Big O.” According to Wikipedia, it’s the second largest freshwater lake in the continental US after Lake Michigan. It’s about half the size of the state of Rhode Island and is shallow with an average depth of only nine feet. 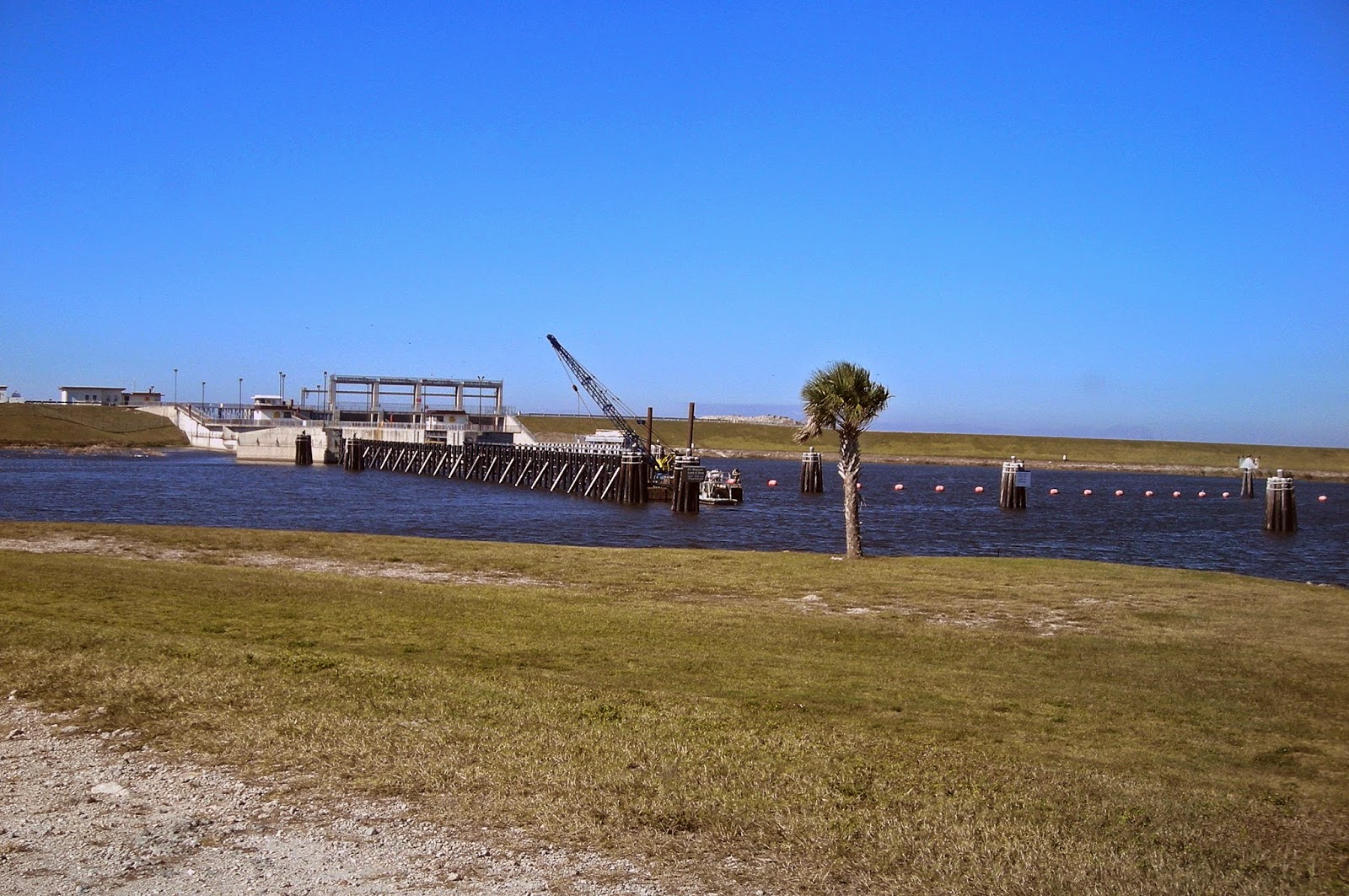 Locks before entrance to the lake

Boats use the Okeechobee waterway to cut cross the state of Florida to avoid going around the southern tip by the Florida Keys. From the East Coast boaters take the Inter-coastal waterway to Stuart and the St. Lucie River or they can enter from the Gulf of Mexico from the Caloosahatchee River in Ft. Myers. The boats go through a series of locks from Stuart into the actual Lake itself. 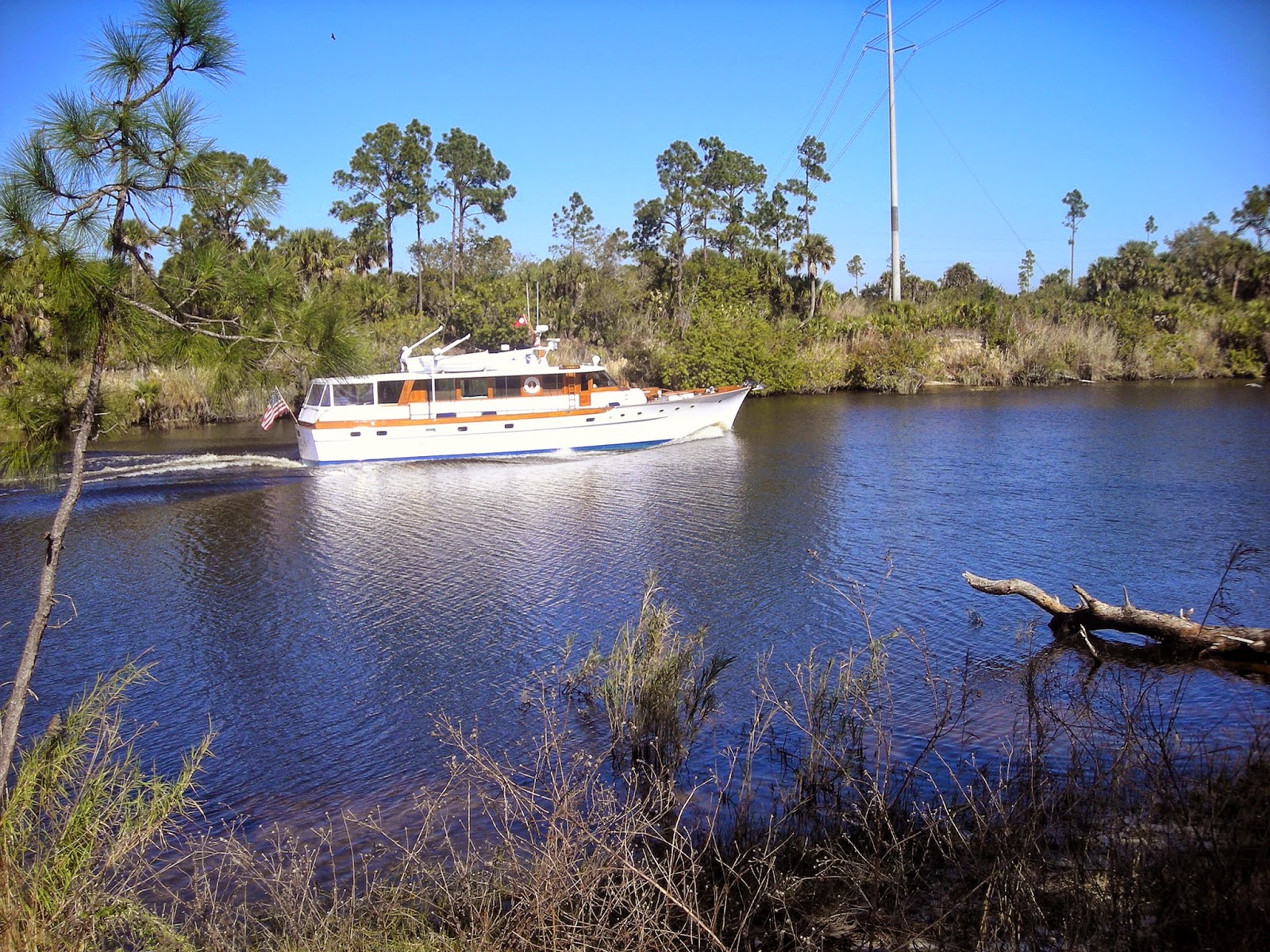 Here’s a gorgeous cabin cruiser, probably fifty feet long, with beautiful bright work traveling along the waterway. As you can see, the waterway is narrow and reminiscent of the Everglades. We didn’t see any alligators, but it sure looks like a place you would find them. 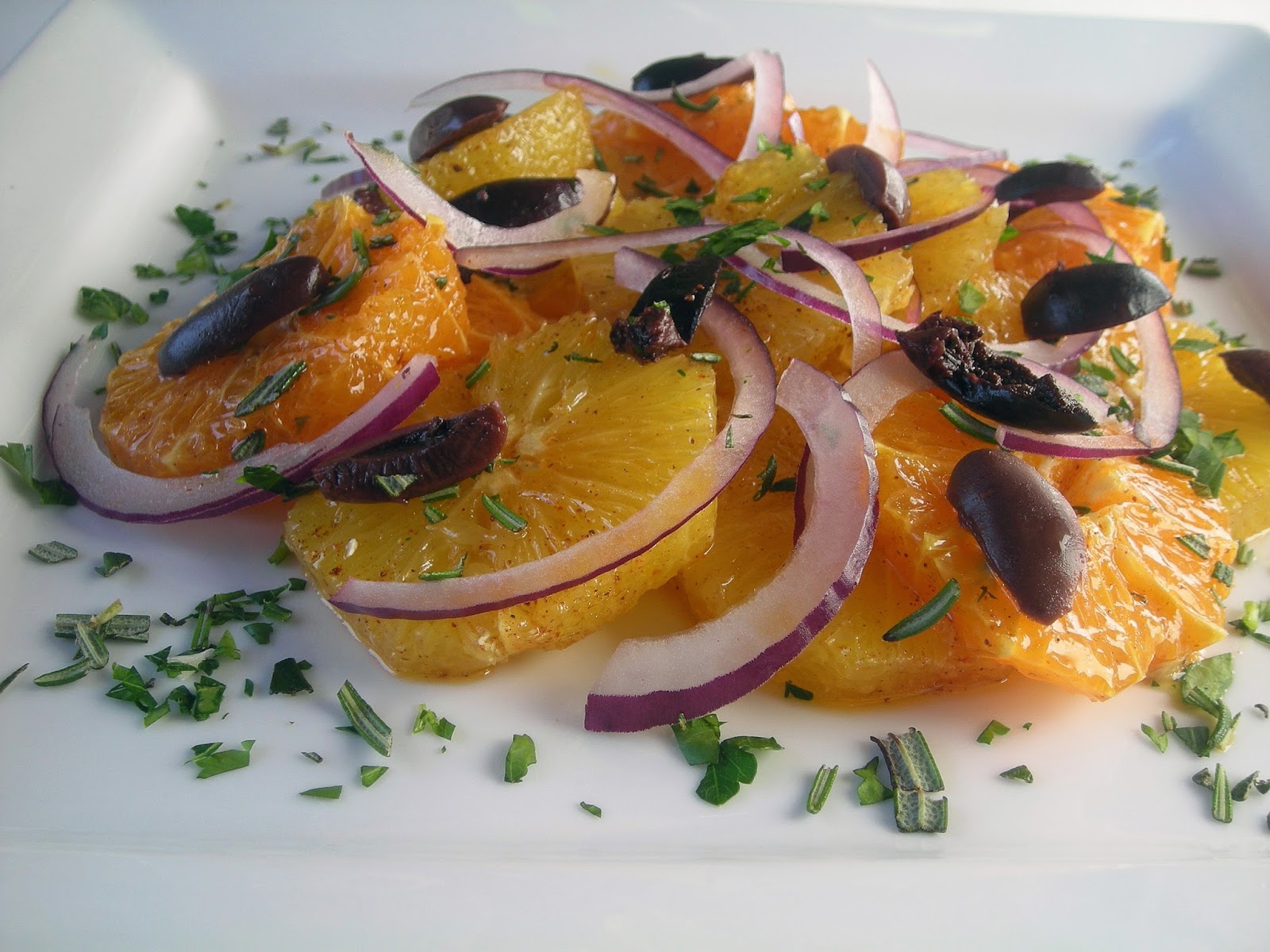 We picked up some fresh oranges and tangerines and made a simple Orange Salad when we returned home to go with grilled chicken breasts for dinner. It’s a hastily made, colorful salad of thinly sliced oranges and black Kalamata olives dressed in vinaigrette and sprinkled with fresh Italian parsley and fresh rosemary and slivered red onions. You can also use blood oranges, which make it even more beautiful. I found this recipe in one of Pierre Franey’s 60-Minute Gourmet cookbooks many years ago.

I toss thinly sliced oranges in a bowl with vinaigrette of one part red wine vinegar to three parts extra virgin olive oil seasoned with minced garlic, some Hungarian paprika and salt and pepper to taste and dress as above. You can leave out the black olives or the rosemary if you wish. I’m a big fan of rosemary, as you know, so I use it whenever I can.

Posted by Sam Hoffer / My Carolina Kitchen at 2:30 PM