Book review of French Essence - Ambiance, Beauty & Style in the South of France by Vicki Archer 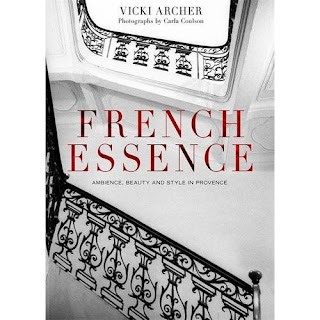 Ten years ago Australian Vicki Archer, along with her husband and three children, bought and restored an olive farm and mas (French farmhouse) outside of Saint-Remy-de-Provence, an ancient, romantic walled village in the heart of Provence. The south of France is undoubtedly one of the most gorgeous places in the world. Vincent van Gogh also thought so because it was the setting for many of his famous masterpieces, including Starry Nights. There’s something very special about the light there that I’ve never seen anywhere else. With her captivating prose, Vicki paints an intimate portrait of life in Provence as only an insider could know. You will be captivated by the numerous photographs in the book by celebrated and talented photographer Carla Coulson as she captures the beauty of Vicki’s private Provence through the lens of her camera. All of the photographs shown below from the book are by Carla. 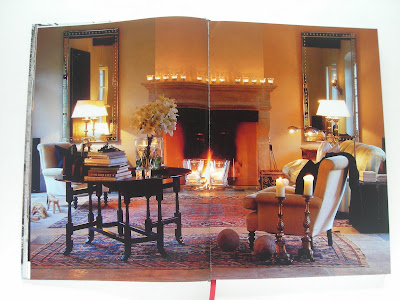 Sitting room in winter Mas de Berard
Vicki’s first book, My French Life, tells the story of the beautiful restoration of the Mas de Berard, her property in Saint Remy and French Essence takes over where it left off. For a fascinating interview with Vicki about My French Life, please visit the charming blog Annechovie, which I know you will love. 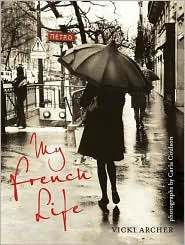 Vicki has a very popular blog of her own, French Essence, that if you haven’t visited, you must. Pop over there now if you wish, but hurry back. I was lucky enough to receive a signed copy of French Essence from Vicki and I’m dying to tell you all about it. 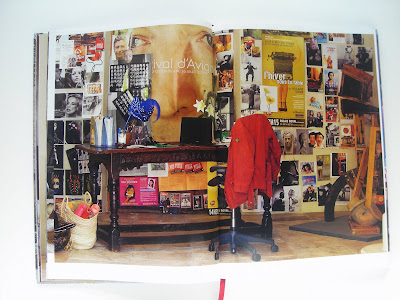 Vicki Archer’s inspiration wall
In the introduction Vicki describes French Essence as a continuation of her love affair with France and in particular Provence. I can fully understand that love because my husband and I have had the privilege of visiting Provence and Vicki’s charming village Saint-Remy-de-Provence twice and we, like Vicki, fell instantly in love. 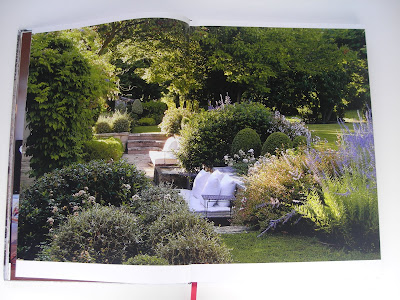 Morning light on the terrace Mas de Berard
Through French Essence Vicki shows you her private Provence, the inside of her gorgeous home, and takes you on a tour of her beautiful lush gardens that are so typical of the south of France. Vicki says she “views the gardens as a series of exterior rooms and moving between the areas provide an element of surprise and a changing palette for outdoor living.”
Lazy days on the lawn at Mas de Berard
You feel as if you’ve been with her during the olive harvest in the fall of the 3000 olives trees on the property that help make the farm self-supporting. After the harvest, the olives are taken to the CastelaS mill in Les Baux for processing. As a matter of coincidence - my husband and I visited the CastelaS mill when we were there and bought a bottle of cold-pressed A.O.C. olive oil in their shop. Perhaps it’s possible we’ve tasted the rich olive oil from Vicki’s Mas de Berard. 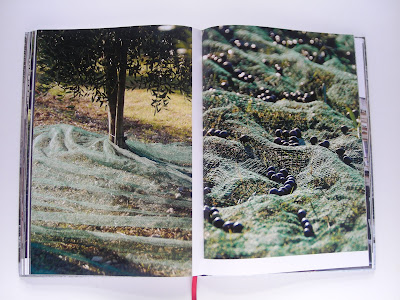 Olive harvest with nets draped under the trees

In the walled city of Avignon where thousands of visitors flock to see the Palace of the Popes, Vicki takes you on a private tour of some of her favorite spots - the Opera Theatre and the Place de La Mirande. 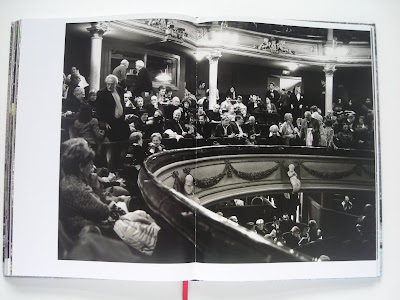 Interior of the Opera Theatre in Avignon
Along the narrow cobbled streets of Avignon after the Opera, she goes to the Place de La Mirande, a splendid family-run hotel that dates back to the 14th century.
Salon of La Mirande, Avignon
She visits French Impressionist Cezanne’s Aix-en-Provence, where she introduces you to her favorite family-owned chocolate shop, Le Chocolaterie du Puyricard. And for pure whimsy and the child in all of us, there’s a chapter devoted to the colorful French circus to transport the reader to a world of make believe. 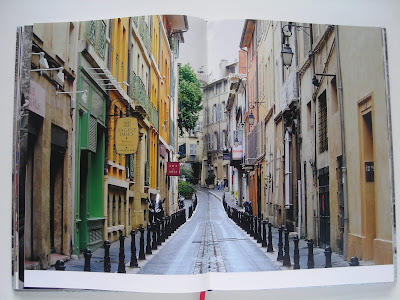 Streetscape of Aix-en-Provence
French Essence is a delight to read and makes a great gift for Francophiles such as myself, lovers of all things beautiful, and la bonne vie, or the good life as the French say. The book’s cover is elegantly plush and makes a spectacular addition to your collection of coffee table delights as does her first book, My French Life.
I’ve searched on line for the best place to buy French Essence and I’ve found two sources – Borders.com and The Nile.com. But you may find others based on where you live. Vicki’s first book, My French Life, is available at Amazon. Both books will leave you wanting to buy a ticket for the next flight to Marseilles so you can capture the French essence of the south of France for yourself. 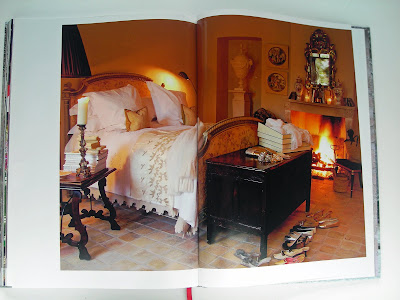 Guest room at Mas de Berard
When I received my signed copy of French Essence, my husband and I were flooded with wonderful memories of our visit to Vicki’s charming village, Saint-Remy-de-Provence in 2007. (See the side bar for links to those posts under France.) We rented a house there for two months and shopped with the locals, cooked and ate their wonderfully fresh foods until our hearts and stomachs were content.

In future posts I’ll be featuring some of the foods typically found in Provence and other of our French food favorites. The first will be a Daube de boeuf a la Provencale, a slow-cooked beef dish that is a specialty of the region. For dessert there are oranges marinated in brandy, a light fresh winter salad that’s perfect to round off the very hearty meal.
Posted by Sam Hoffer / My Carolina Kitchen at 2:25 PM