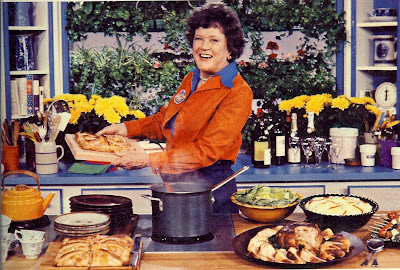 Backstage with Julia, My Years with Julia Child by Nancy Verde Barr is a lovely memoir of Barr’s years as Julia’s assistant. Barr worked for Julia for eighteen years on her TV shoes, cookbooks and articles, serving as executive chef for Julia’s live demonstrations and monthly features in Parade magazine and they became great friends. For foodies, this must have been a dream job. Her book is a delightful behind the scenes look at life with Julia and a “must read” for Julia fans such as myself. 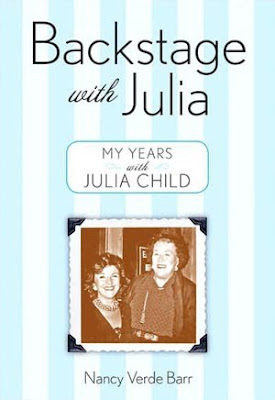 Barr tells charming stories such as what it was like to go to dinner at the Childs. To Julia, “come for dinner” meant “we’ll cook dinner together first, then we’ll eat,” says Barr. Julia had a very casual manner of having guests cook with her, including the likes of Jacques Pepin or John Kenneth Galbraith, President Kennedy’s ambassador to India. They were all just cooks in the kitchen. With or without company, Julia’s meals were unpretentious. Unless someone brought an appetizer or the ingredients to make one, the only hors d’oeuvres were Pepperidge Farm Goldfish. Often dessert would be store-bought vanilla ice cream with very good bourbon drizzled on top.

The Childs preferred to eat in the kitchen unless there was a sizeable guest list and then dinner was served around their dining room table, which could seat twenty. Barr says Julia’s kitchen table was in the center of the room and permanently clothed in colorful Marimekko-style padded vinyl tablecloths. Can’t you just hear Julia saying to Barr, “We can just wipe them down. Whoosh!” as she made a quick wiping motion with her arm.

When Julia moved to California from Massachusetts in 2001, she donated her kitchen to the Smithsonian's National Museum of American History and the exhibit is called “Bon Appétit.” Her husband Paul designed it for her in 1961 and for seven years the kitchen was the set for her television series. Millions, including myself, watched the shows. With her distinctive voice, I can remember her telling us to “shoot the wad” when buying the best ingredients and to “go whole hog” in fearlessly cooking them. 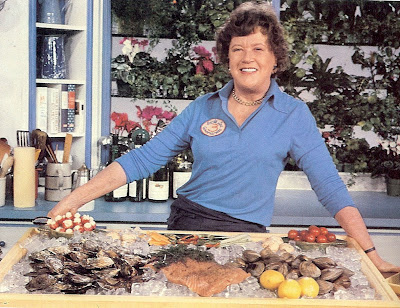 Julia didn’t like “crunchly undercooked vegetables,” as she called them. She told Barr, “I like my vegetables raw or cooked, but that in-between ridiculousness is inedible and I won’t eat them.” Way to go Julia – I totally agree.

Over the years Barr and Julia became friends. She simply adored Julia, but who didn’t? Julia had incredible energy and did not allow herself or others around her to use the T-word (tired) and it visibly annoyed her if anyone did. According to Barr, late one night after Julia had had an incredibly long day a woman approached her and said, “Oh, Mrs. Child. You did so much today. You must be exhausted.” The pathetic whine in the woman’s voice sent Julia into a stern, defensive stance. “I don’t exhaust,” Julia brusquely snapped back as she quickly turned away from the startled woman and lead Barr and her colleagues back to the hotel for a nightcap.

Barr says Julia’s total lack of pretention and nonchalance about her fame – how unaware she was of her own celebrity - surprised some journalist, many of which she invited over for lunch at her house. She says she can’t help but smile when she reads the account of how they expected to be served a gourmet lunch and instead got a tuna fish sandwich – albeit a very, very good tuna fish sandwich.

There are many more delightful anecdotes including how enamored Julia was with Charlie Gibson (currently the host of ABC's World News with Charles Gibson) and the magic that occurred between them on stage when she did her live spots on Good Morning American. Charlie once told Julia’s husband Paul, “I hope you don’t mind, but I’m in love with your wife.” “Not at all,” Paul said, “I’m in love with her myself.” 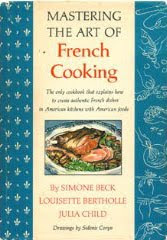 If you were in love with Julia and enjoyed the movie Julie and Julia, I guarantee you will love this wonderful book. I learned to cook from Julia and mastered my knife skills from the black and white drawings in her Mastering the Art of French Cooking, which I wrote about a while back. As Julia would say, “Bon Appétit.”