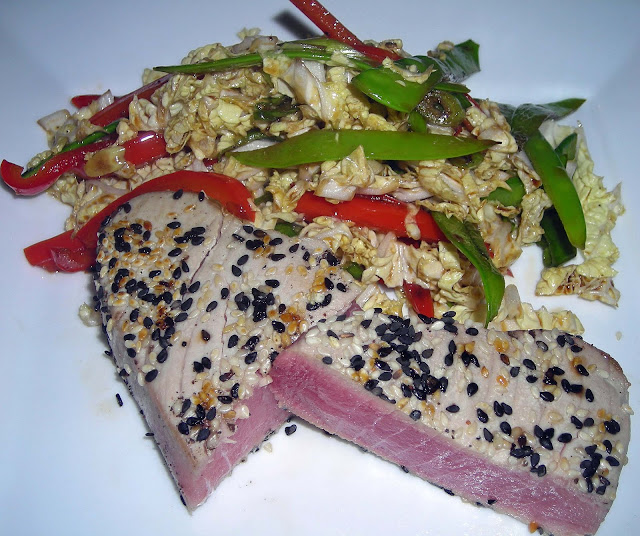 Fresh tuna is meaty and lean and one of our favorites. However, like any fish, it’s important that you have the freshest available. For tuna steaks, if you like yours rare, or even medium rare, be sure to choose steaks that are about an inch thick. A thin steak will overcook quickly and for us it’s a sin to overcook tuna. If you’re making tartare you can use a thinner piece because it’s going to be chopped. We like to serve our tuna steaks with a wasabi aioli dipping sauce.

I’ve prepared Asian Coleslaw as a side dish for the tuna steaks. This is a very versatile slaw and one of our favorites because it’s not sweet or dressed with mayonnaise. It could be called skinny slaw because it’s not full of the calories associated with mayonnaise. Sometimes I use an ordinary head of green cabbage and dress it simply with the vinegar, soy sauce and dark sesame oil and throw in some sliced scallions for color. Other times I’ll dress it up with the red peppers and snow peas as I have here. I also like to toast black sesame seeds in a hot skillet for a few minutes and add them to the slaw. It’s also good with finely minced fresh ginger and chopped fresh cilantro or a finely chopped jalapeno pepper for zing. I’ve even chopped peanuts and used them as a garnish. Let you imagination run wild here – almost anything goes.

Salt and pepper tuna steaks. Dredge tuna on both sides with the black and white sesame seeds and briefly set aside. Heat a black, cast-iron skillet over high heat until skillet is almost smoking. Add tuna and cook one minute or so on each side for rare, 2 – 3 minutes for medium rare. Remove tuna from the skillet, let rest for a few minutes before serving. Serves 2. Serve with wasabi aioli dipping sauce if desired.

We like our wasabi sauce with a kick to it so we use 1 ½ tablespoons of powder to 1 tablespoon of water. Most recipes call for equal parts wasabi powder to cold water.

Mix the wasabi powder with cold water in a small bowl and set aside for about 30 minutes. Add wasabi powder to mayonnaise, then mix in remaining ingredients and blend well. Refrigerate sauce for thirty minutes for flavors to marry. Serve cold.

Heat about a tablespoon of peanut or canola oil in a 10” non-stick skillet over medium-high heat and sauté red bell pepper strips and snow peas two to three minutes until beginning to brown but still crisp tender. Season with salt and pepper, remove from skillet and set aside. 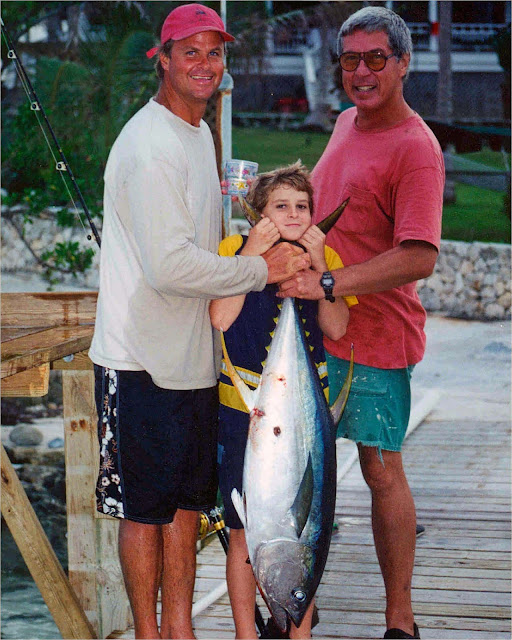 When we lived in the Bahamas, tuna was on the menu frequently. This is a picture of my husband and his friends with their catch, still dripping with salt water. Tuna tartare is my husband’s specialty and he tastes and blends as he goes. If you haven’t caught the tuna yourself and know the freshness, tell your fish monger that you plan to eat it raw when you purchase it. He’ll either give you an extremely fresh piece or tell you he would advise against buying what he has. In that case, leave it at the store.

My husband has been making this tartare for years and it turns out that it’s very similar to the tuna tartare recipe in Simple to Spectacular by Jean-Georges Vongerichten and Mark Bittman. After reading their recipe, we’ve started to give it a few extra shakes of hot sauce and have included chopped chives, as they suggested. Be sure to make this at the very last minute or the lime will cook the tuna and make it mushy. 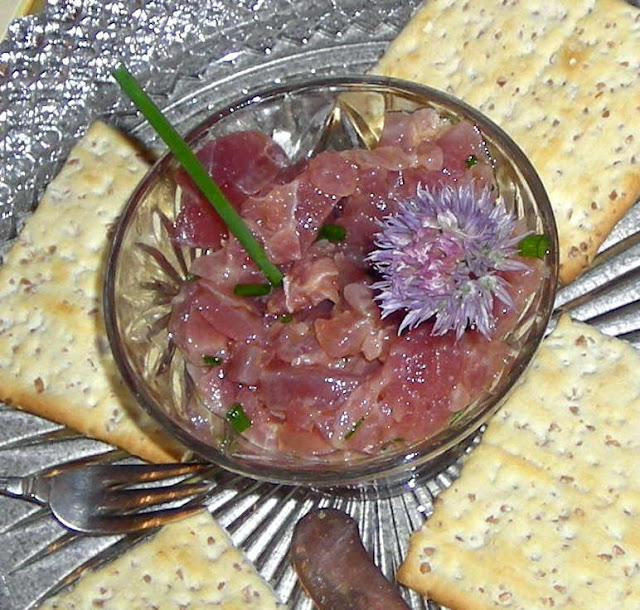 Cut 1 lb of best quality tuna into small cubes. Combine the tuna with 1/2 teaspoon or more (if you like it spicy) of hot sauce, such as Tabasco, a squeeze or two of fresh lime juice, 2 tablespoons good extra-virgin olive oil, Kosher salt to taste, and a tablespoon of minced fresh chives. Garnish with a chive blossom. Serve at once on neutral tasting cracker such as Carr’s or Stoned Wheat Thins or on thin slices of a toasted French baguette. Serves 4 as an appetizer.

Posted by Sam Hoffer / My Carolina Kitchen at 10:46 AM