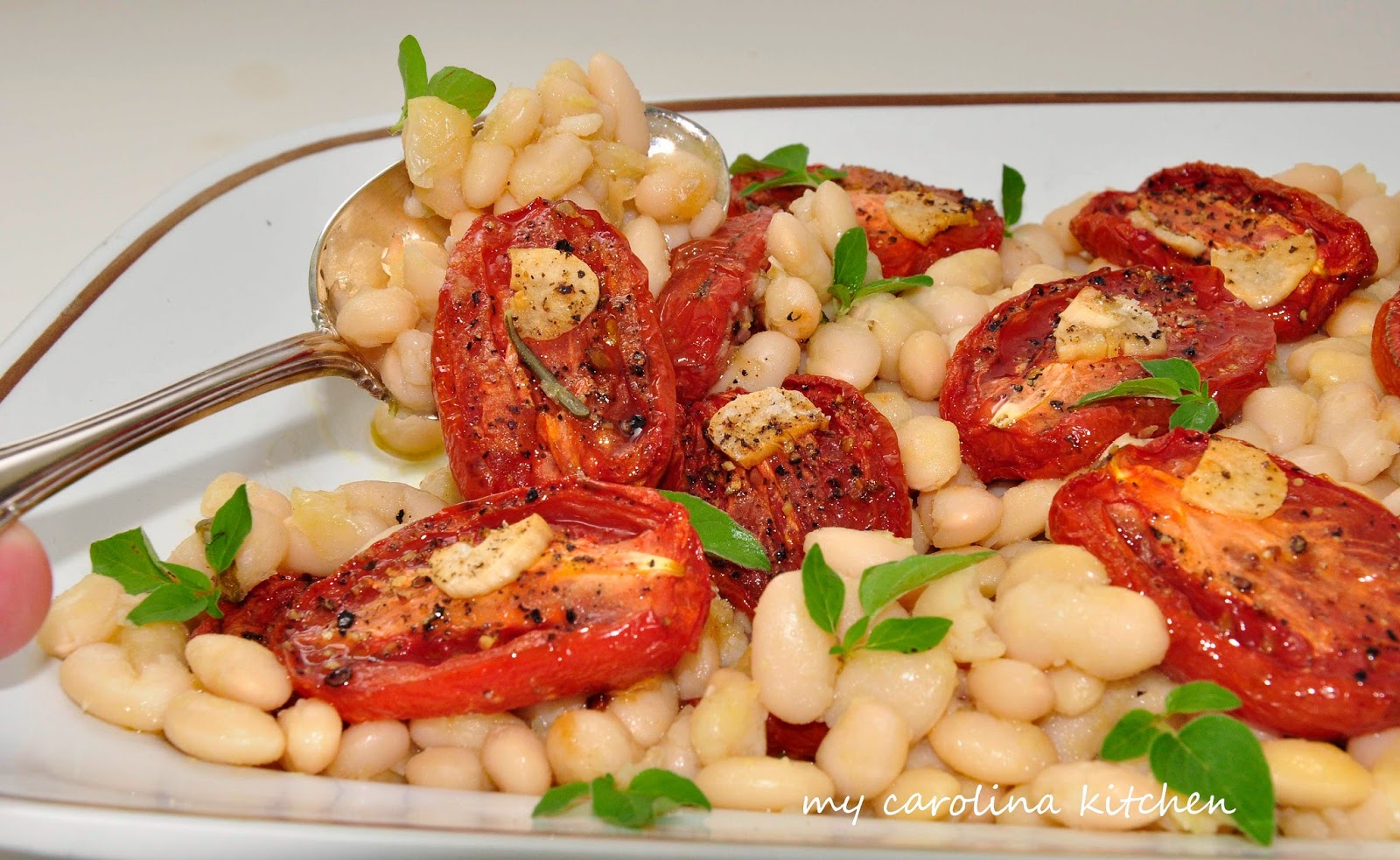 In theory this is a salad, but it’s more of what I think of as comfort food. It’s the kind of food I crave when the weather starts to cool. Even though the recipe looks long, it’s very simple to make and doesn’t require a lot of attention while is cooks.

Most likely you already know out of your head how to cook dried beans and to roast tomatoes and if you do, there’s nothing much left to do other than to assemble the salad. It’s perfect for serve yourself buffets or double or triple it for a covered dish party.

If you’re in a pinch for time, you could substitute canned beans. But I think beans cooked from scratch always taste superior in flavor as well as have a nicer texture. In truth, they beans practically cook themselves and require very little attention from you. 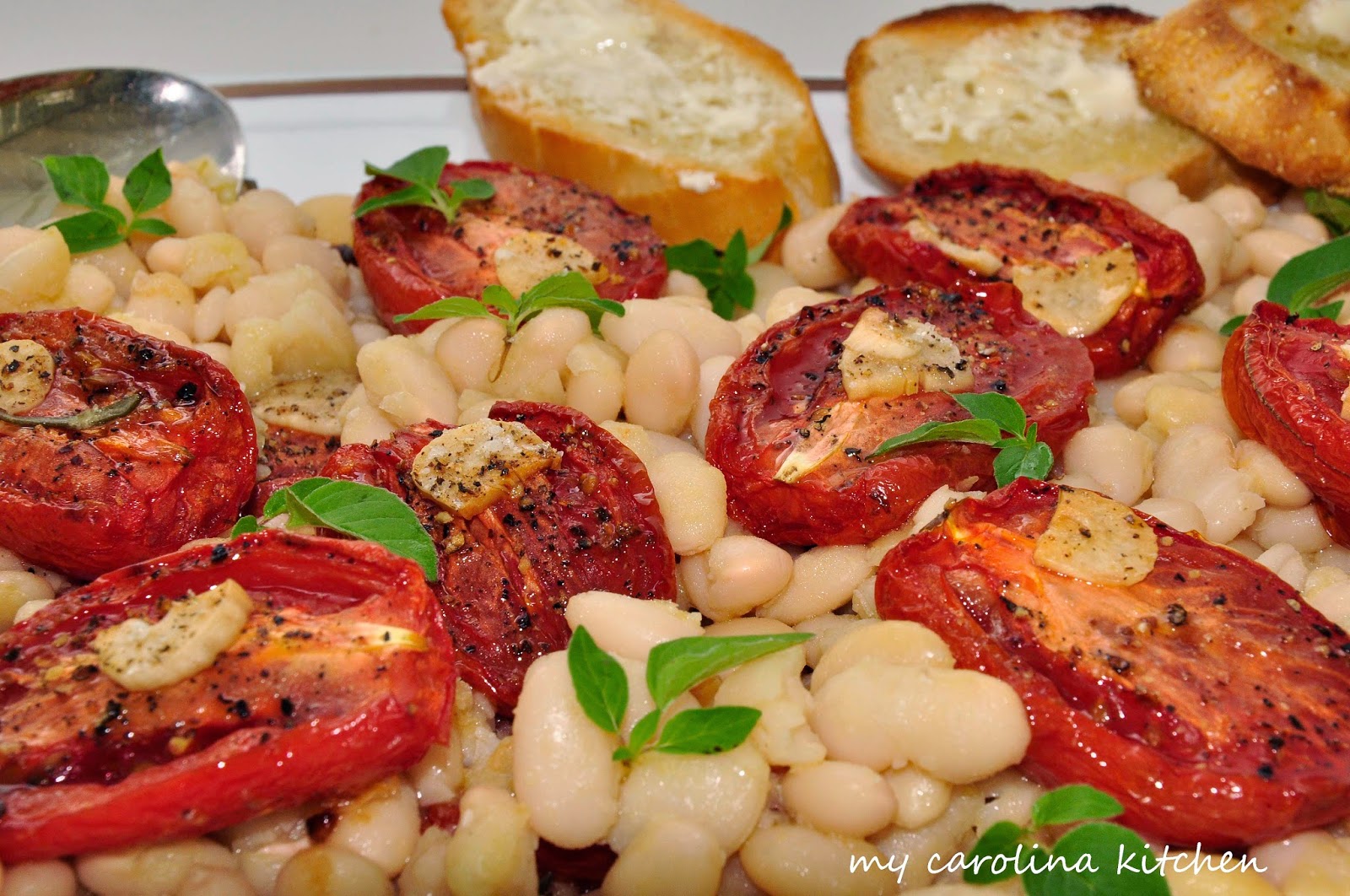 Place roasted tomatoes in a bowl. Add cooked white beans, oregano, olive oil, and vinegar and toss to combine. Season to taste with sea salt and freshly ground black pepper. Serve in bowl or transfer to a platter. Garnish with fresh oregano leaves.

Cook’s notes: This salad is excellent served either warm or at room temperature. It’s perfect for a serve yourself buffet or to double it for a covered dish party. 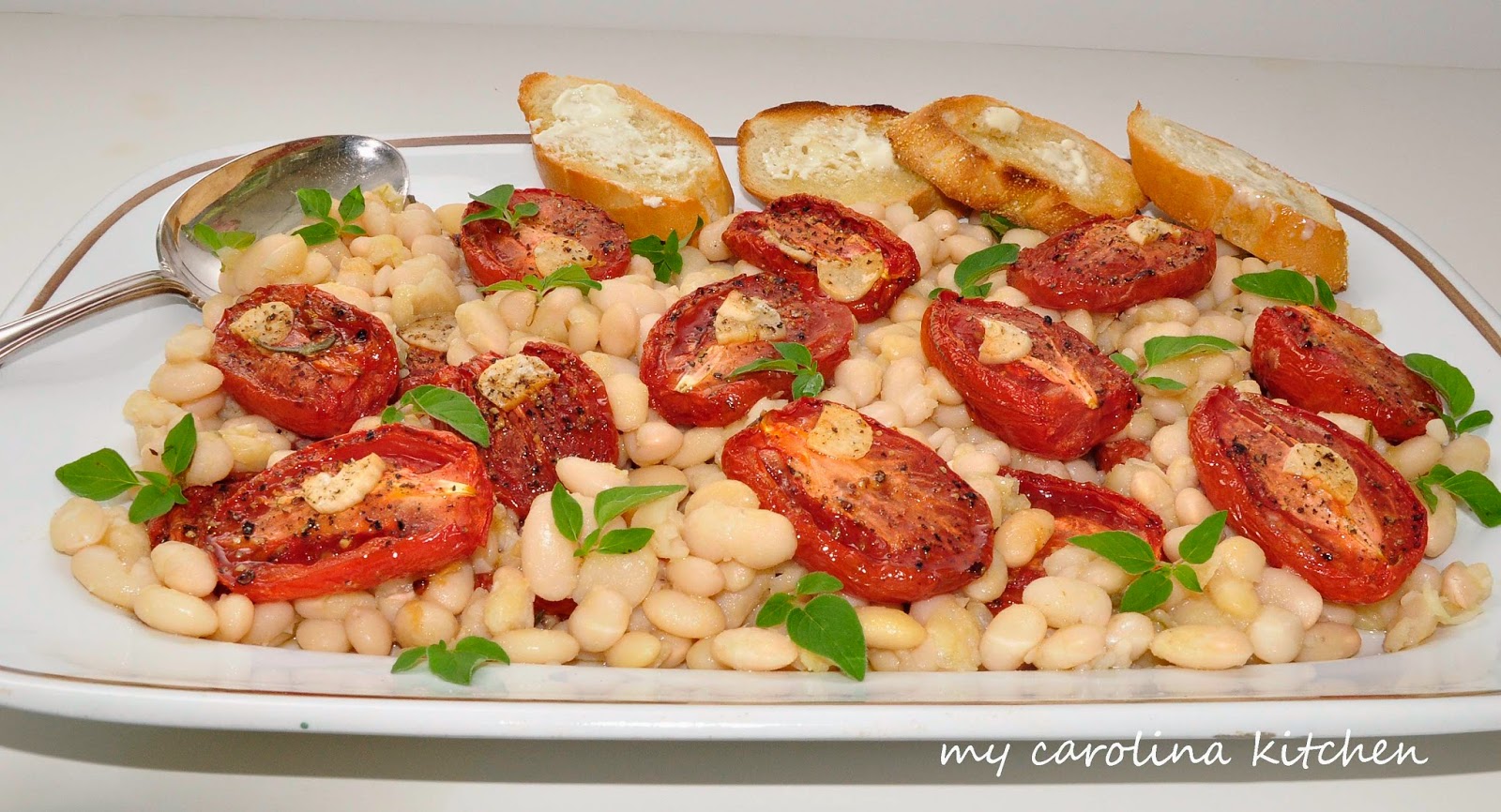 Preheat the oven to 300 degrees F. Lightly oil a rimmed baking sheet. Arrange tomatoes, cut side up, on prepared baking sheet. Drizzle with olive oil and sprinkle evenly with sugar, garlic, and generous amounts of salt and pepper. Roast tomatoes until deep red and wrinkled, 2 – 2 ½ hours for medium or plum tomatoes and 1 hour for cherry tomatoes. Remove from oven and let cool on baking sheet. Taste for seasonings and serve warm or at room temperature.

Cook’s notes: If you can find them, yellow tomatoes added to red tomatoes make a pretty combination. 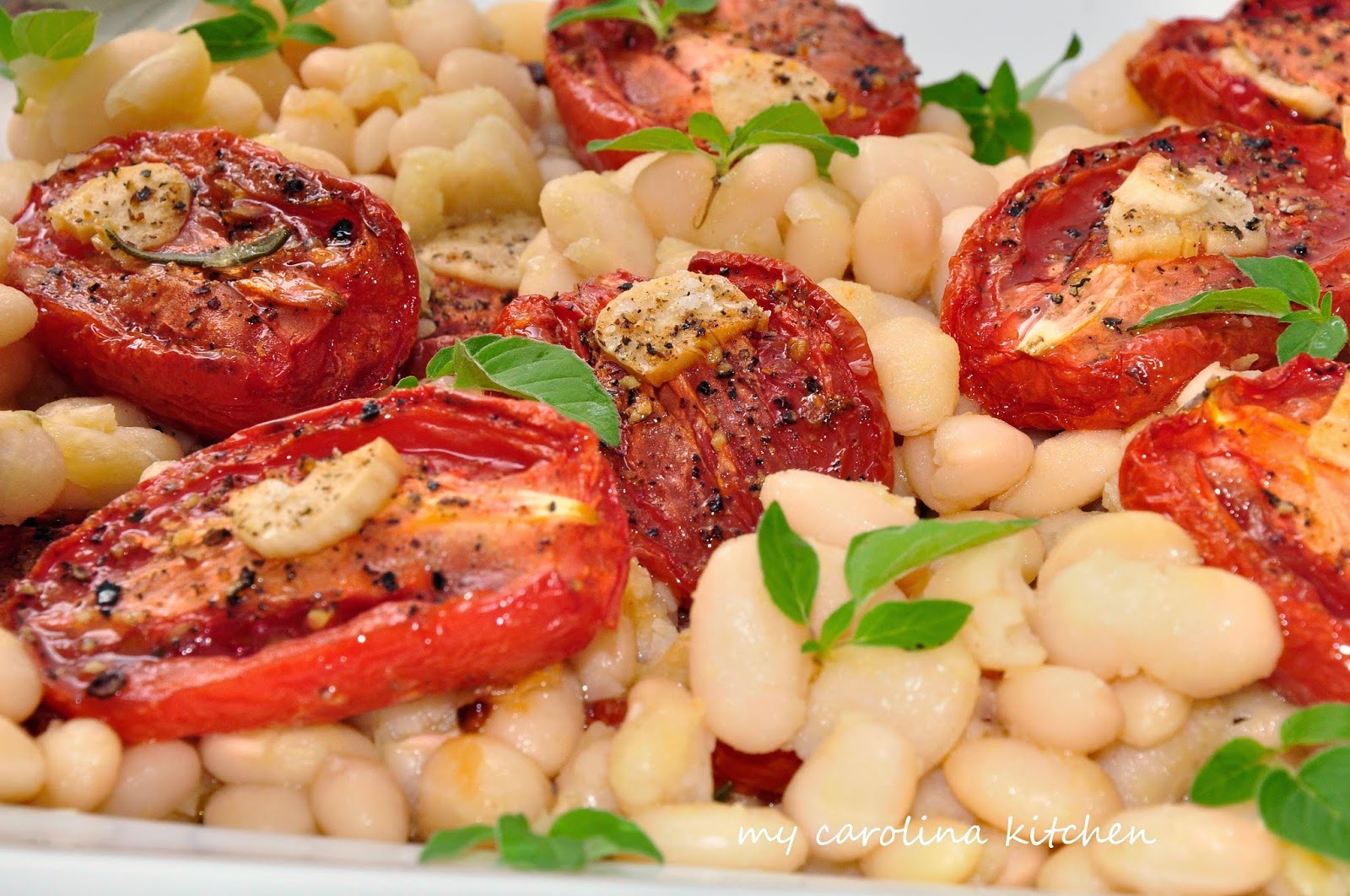 In a large Dutch oven, combine beans, rosemary, thyme, bay leaves, garlic and 8 cups of water. Cover and slowly bring to a simmer over low heat. Simmer uncovered, until beans are tender but not mushy. About half-way through the cooking process, add 1 tablespoon sea salt. Remove from heat and let cool, covered for 15 minutes.

Drain beans and discard their cooking liquid. If desired, discard rosemary, thyme, bay leaves, and garlic. Sprinkle the beans with pepper and more sea salt if needed, drizzle with olive oil, and serve.

Cook’s notes: Be careful not to let the beans cook at too high of a simmer or their skins will separate and the beans will be mushy.  I usually check beans about 10 minutes before they are supposed to be done to avoid over-cooking. 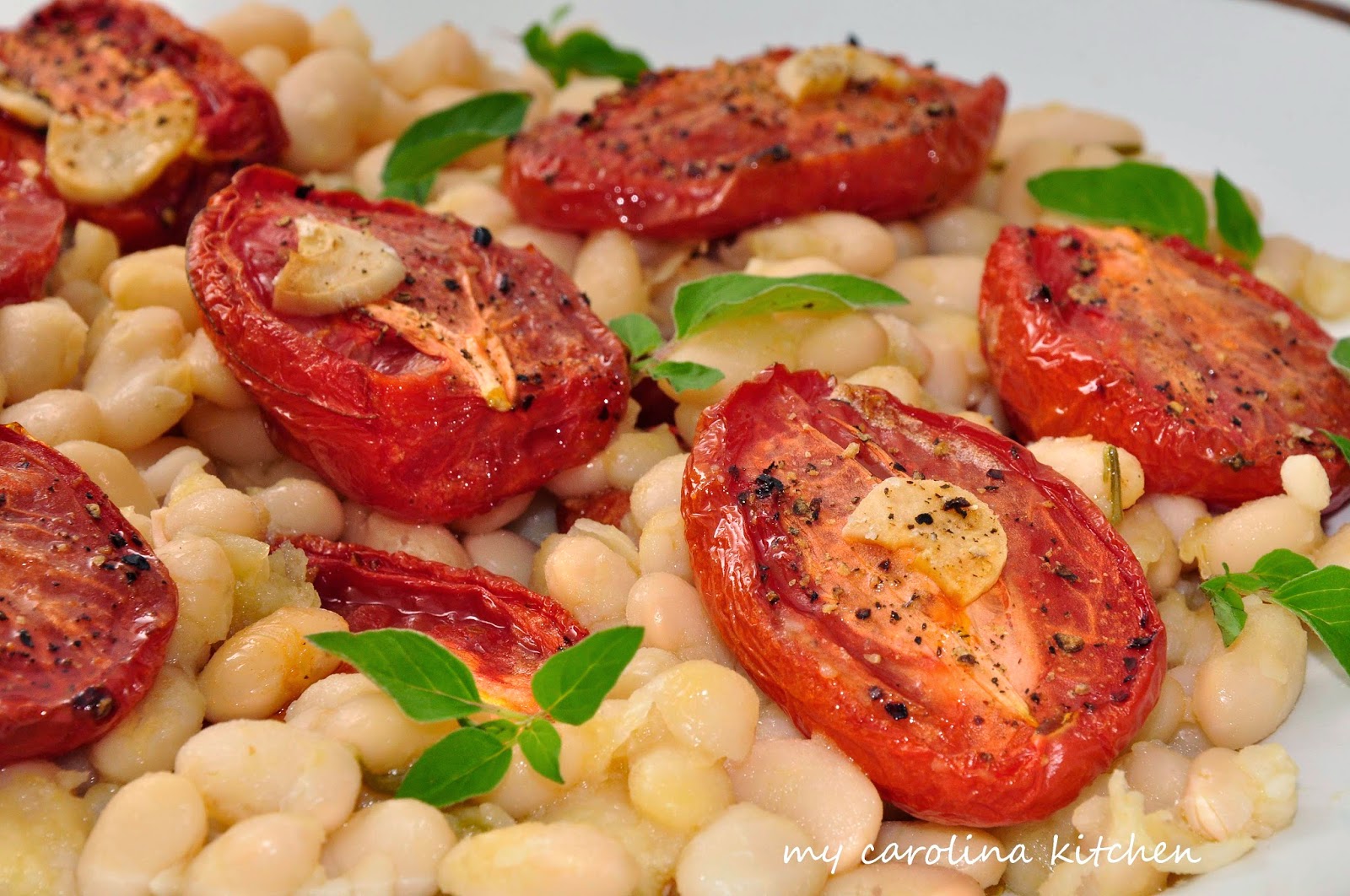 This will be shared with Foodie Friday at Rattlebridge Farm, Miz Helen’s Country Kitchen Full Plate Thursday, and Weekend Bites at Simple Recipes.

Posted by Sam Hoffer / My Carolina Kitchen at 7:30 AM

Email ThisBlogThis!Share to TwitterShare to FacebookShare to Pinterest
Labels: Salads