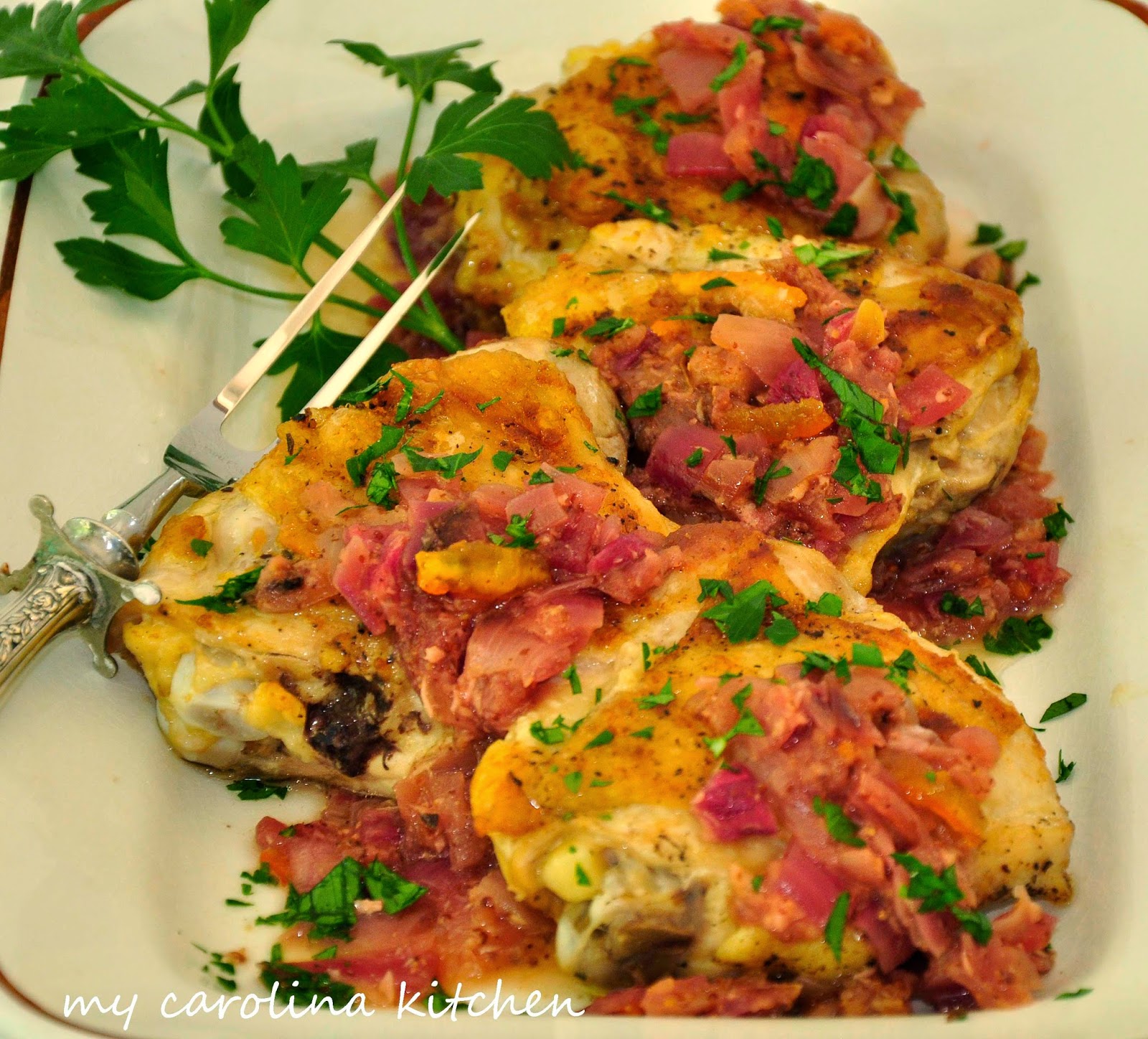 Are you familiar with Jezebel sauce, also known as Dixie relish? Apparently it’s an old Southern staple, but somehow in my Deep South upbringing, Jezebel sauce escaped my life completely. Recently an inviting picture of Jezebel sauce served over nicely charred pan-roasted chicken appeared in Garden & Gun magazine (read more about the magazine at the end of the post). It caught my eye and I instantly became intrigued with the sauce named Jezebel and wanted to know its origin.

According to Garden & Gun magazine, one of the great authorities on life in the South, “Jezebel sauce is a base of apple jelly and pineapple preserves tricked out with horseradish and yellow mustard and traditionally served with a baked ham or spooned over cream cheese and served with crackers.” Maybe if you grew up with it you might love it as you do other old family favorites such as Thanksgiving’s green bean mushroom soup casserole. But from the description above the overly sweet sauce just doesn’t sound very appealing to me. 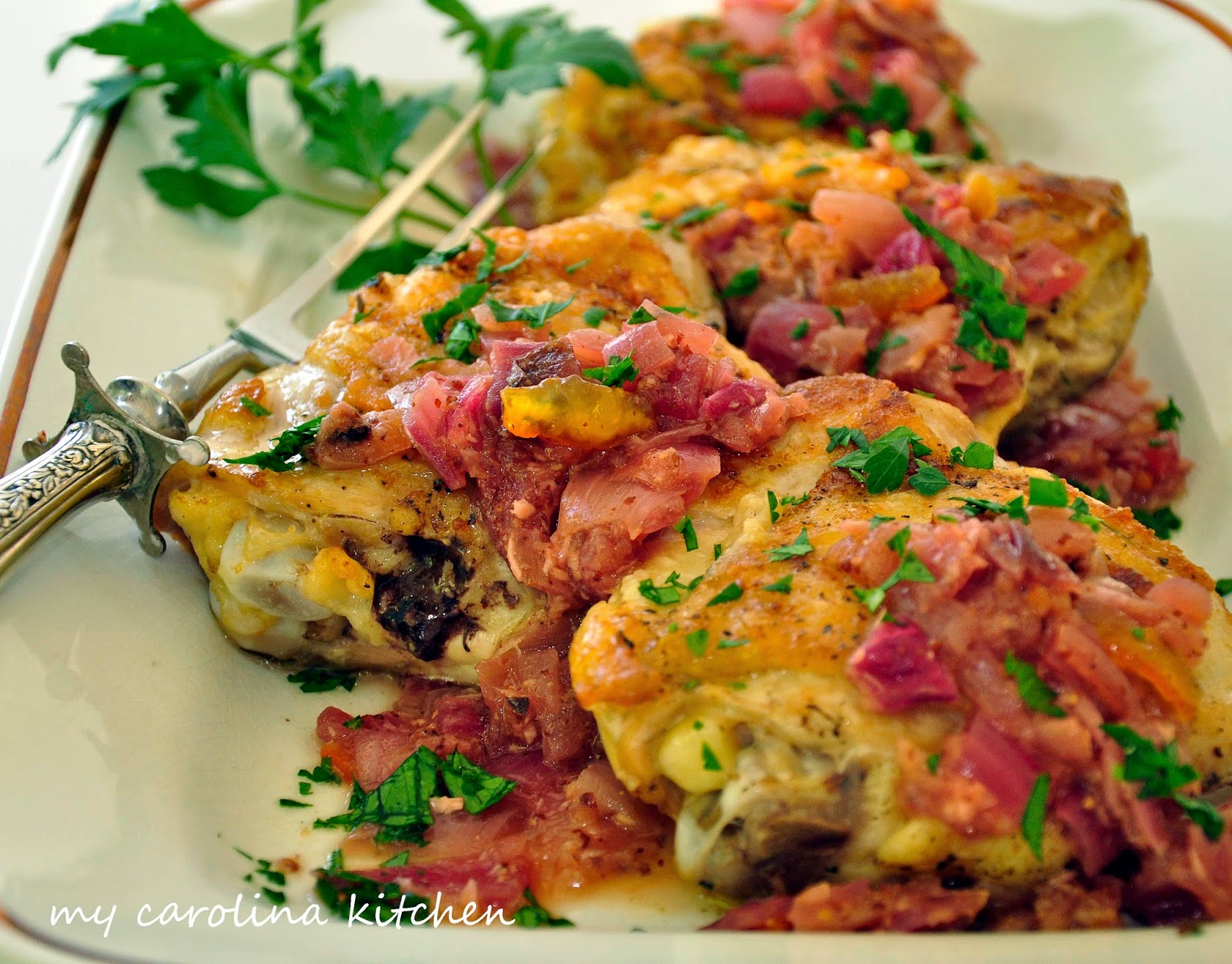 Flash forward to today. Tandy Williams, Chef at City House in Nashville, Tennessee, has totally reworked this old South classic and has brought  Jezebel sauce into the twenty-first century. He caramelized red onions on the grill, then mixed them with grainy mustard and horseradish for a nice tang. Then he added marmalade and sorghum (another Southern staple) to give the sauce a nice depth of flavor and squeezed some fresh lemon juice to give it a nice tart edge. Now that’s more to my liking.

Chef Tandy serves Jezebel sauce over chicken thighs, pan-roasted to perfection in a black cast iron skillet in a hot oven, which is what I’ve done today along with green beans as a side dish. I readily admit that at first I was a bit skeptical about whether I or not I would like Jezebel sauce, but by the same token I was anxious to give the updated version a try. We both thought the slightly tangy, slightly sweet sauce was outstanding and it will definitely be a “have-again” at our house. I also think that Jezebel sauce would be fantastic served with any cut of grilled or roasted chicken or pork chops. It’s so good that it just might become a staple in my refrigerator.

Memorial Day weekend is coming up. If you’re planning on cooking out, I suggest that you make a jar of Jezebel sauce and give it a try yourself over chicken or chops. I’m planning on serving it on grilled hot dogs this weekend. I predict Jezebel sauce, or Dixie relish if you prefer, will surprise you how good it is as much as it did me. 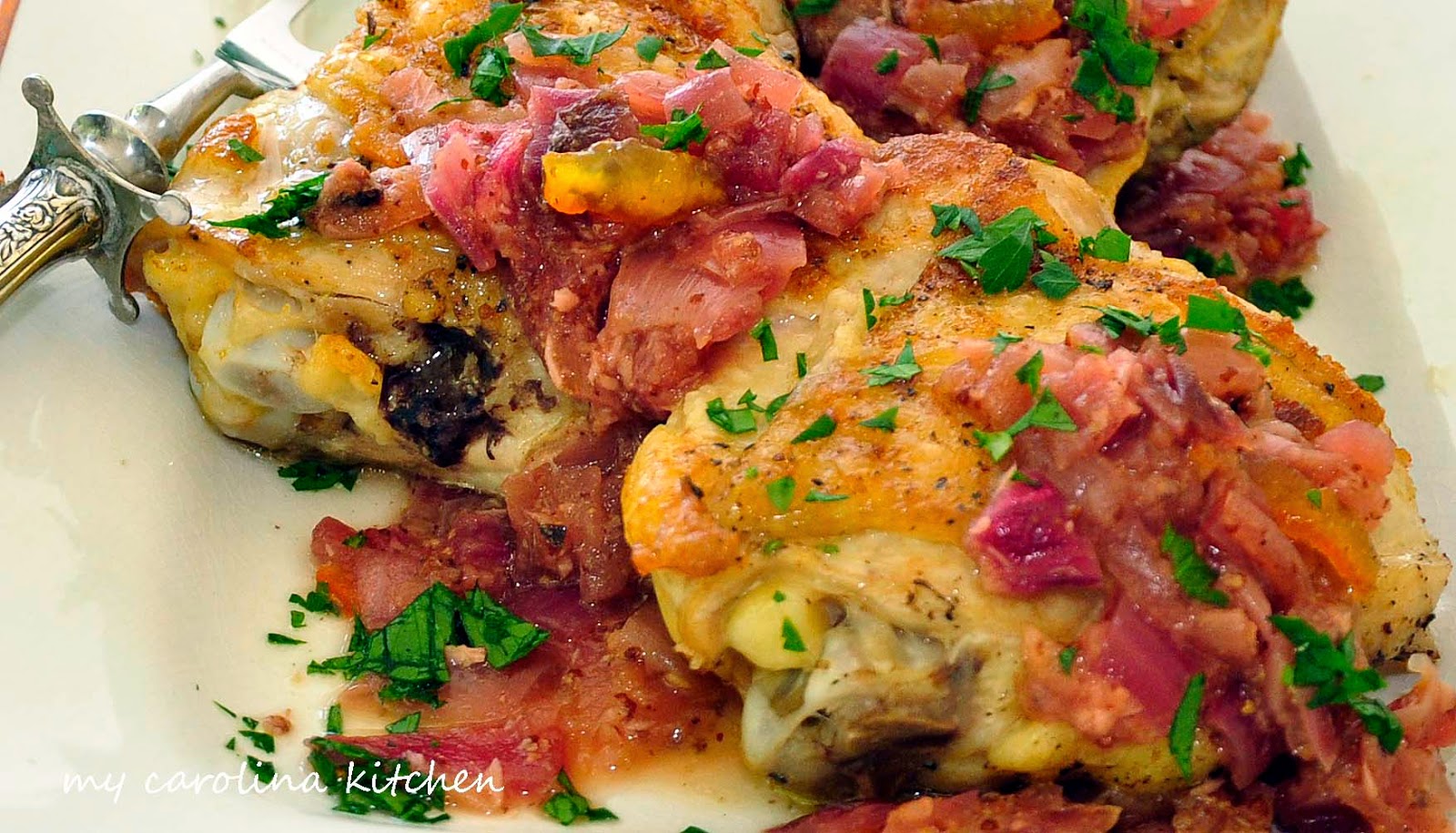 Cut the top and exposed root off of the onions, then peel and quarter from top to bottom. Brush onion quarters with the oil and season with salt and pepper.  Prepare a charcoal grill, or heat a gas grill, or alternately roast onions on a baking pan in a preheated 400 degree F oven, cut side down until browned on the bottom. Let the onions cool, then chop into small pieces.

Mix together the mustard, horseradish, marmalade, sorghum, and juice form the lemon. Fold in the onion & season with salt and pepper. Place the sauce in a jar with a tight fitting lid and refrigerate overnight. Sauce can be refrigerated for up to two weeks in the refrigerator. Before using the sauce, remove from the refrigerator to take the chill off.

If desired, serve the sauce with pan-roasted chicken thighs (recipe below) or other roasted or grilled meats of your choice. 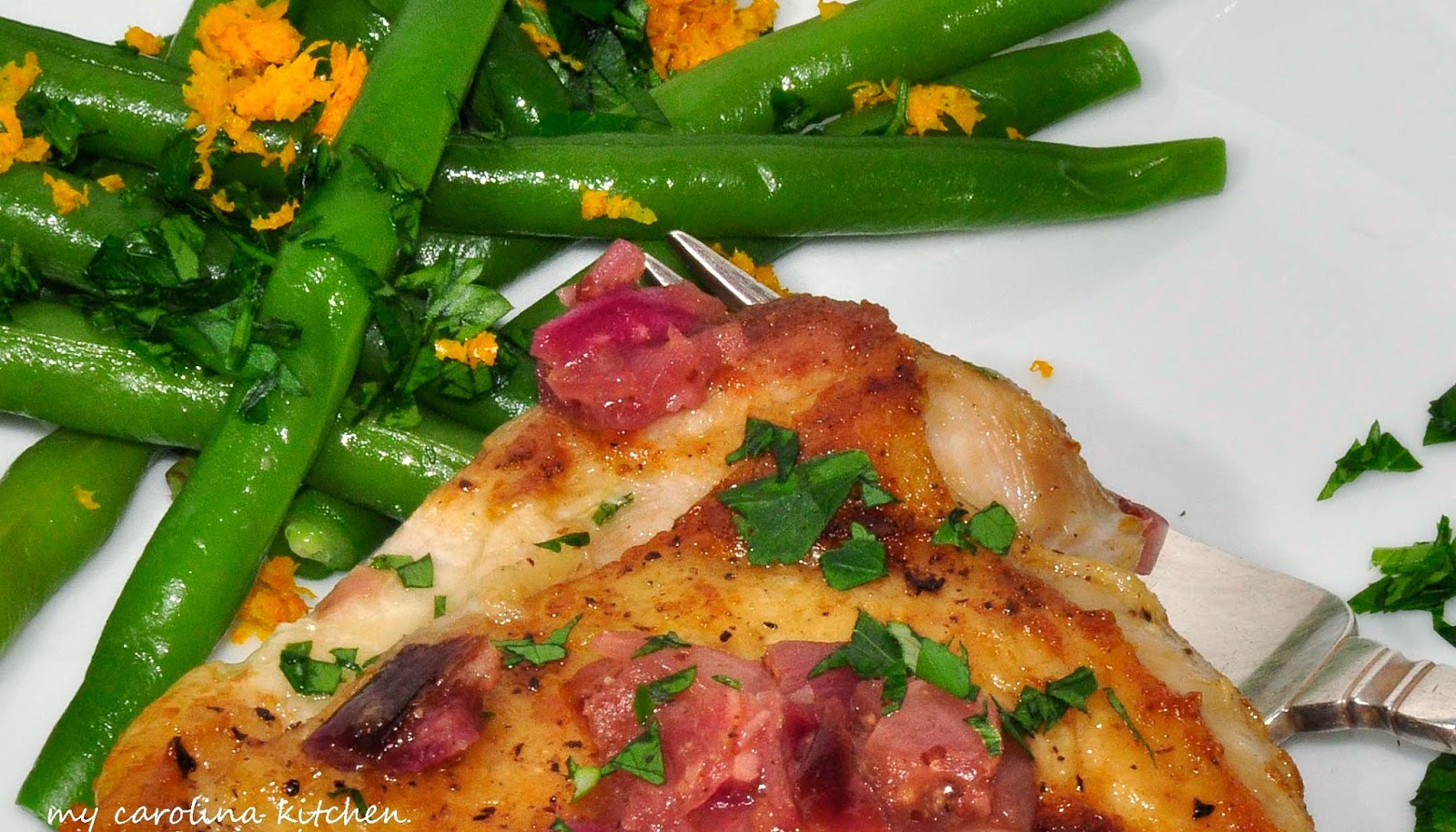 The day before serving the dish, zest lemon and season chicken thighs with salt, pepper, and zest. Cover and refrigerate at least four hours or overnight.

When ready to cook, remove the chicken (and the Jezebel sauce) from the refrigerator to take the chill off. Place a 12-inch cast-iron skilled in the oven and preheat to 425 degrees F. When the pan is hot, remove it from the oven and add two tablespoons of oil and then the chicken, skin side down. Roast for 15 to 17 minutes, or longer if needed depending on your oven (ours took over 20 minutes) until the chicken skin is crispy and the meat is just cooked through.

To serve, place a quarter cup of Jezebel sauce on the plate, add a piece of chicken, then top with another spoonful of sauce. Green beans go nicely with this dish. 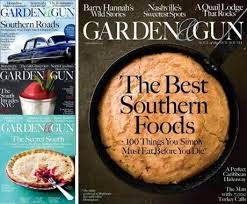 With regard to Garden & Gun magazine, if you love the South or enjoy knowing more about it and have never read Garden & Gun magazine you are in for a real treat. I find that the magazine goes much more in depth about life in the south and its food and culture than other publications, samples of covers above. The word gun in the title refers to the sport of hunting and Southern gentlemen, much like the English, have always loved grand old hunting lodges and have a soft spot in their heart for their hounds. My fathers two sweet old bird dogs accompanied me in my baby stroller everywhere I went and stood guard until it was time to go home.

When I first heard of the magazine I wondered about the name and here’s what Rebecca Darwin, President and CEO of Garden & Gun has to say.

What’s in a Name?
“I am often asked about the title of the magazine, particularly from folks who have not read the magazine yet. The simplest explanation that I can offer is that it is a metaphor for the South—its land, the people, their lifestyle, and their heritage.” Rebecca Wesson Darwin, President and CEO, Garden & Gun 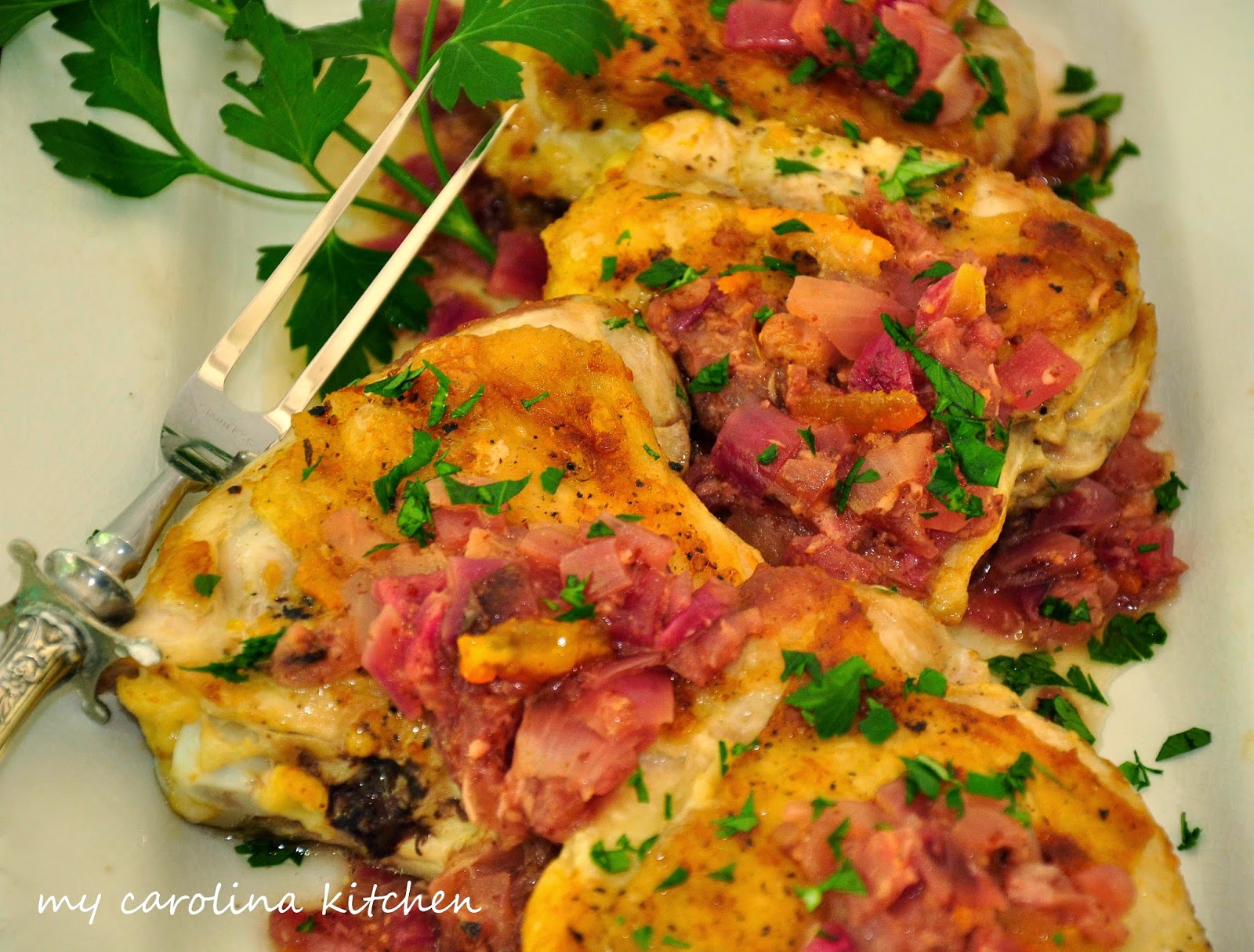 This will be shared with Foodie Friday at Rattlebridge Farm, Miz Helen’s Country Kitchen Full Plate Thursday, Try a New Recipe Tuesday at Home to 4 Kiddos, and Foodie Friday at Simple Recipes.


Have a great weekend everyone and if you are in the states,
Happy Memorial Day.

Posted by Sam Hoffer / My Carolina Kitchen at 7:30 AM