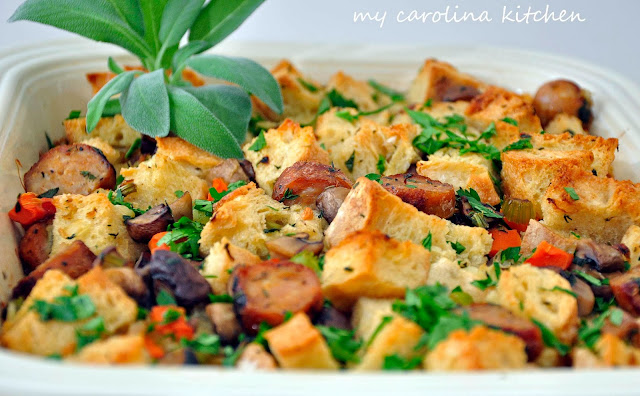 Most years I make a typical southern-style cornbread dressing similar to what was served in my home on Thanksgiving when I was a child, but I was in the mood for a change this year and wanted to try my hand at a bread based dressing. Slightly spicy sweet Italian sausage and rich earthy cremini mushrooms bring a lot of hearty flavors to this rustic-style herb bread dressing. Using artisan bread adds another dimension of freshness instead of using the dried packaged bread stuffing mix. And of course it’s not dressing without the traditional flavors of fresh thyme and sage herbs. An aromatic mirepoix of vegetables rounds out the dish. I did increase the amount of fresh thyme and sage by half again from the original recipe, so if you think that might be too herby for your family’s taste, cut them back to one tablespoon each. 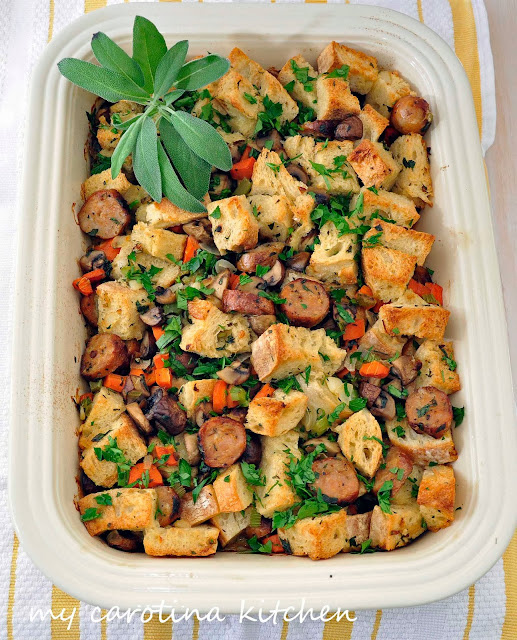 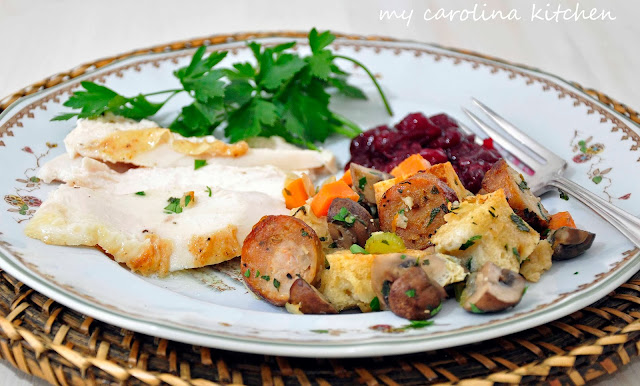 Cranberry sauce is one of my Thanksgiving specialties and I will be posting several versions early next week for those of you that love cranberry sauce, so stay tuned. Here’s a close-up of the herbed bread dressing. Dig in with your fork 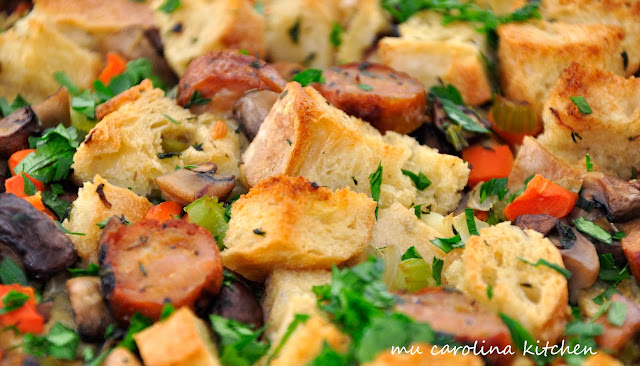 Preheat the oven to 400 degrees F. Cut bread into 1” cubes and arrange in a single layer on a half sheet pan and bake for 10 minutes. Toss half way through to insure evening browning. Remove from the oven and place in an extra large mixing bowl. Reduce the oven temperature to 350 degrees F.

Cook sausage links in a large non-stick skillet over medium-high heat for about 10 minutes until they are cooked through, browning evenly on all sides. Remove from the skillet and set aside until they are cool enough to slice. After they are sliced, add to the bowl with the bread cubes.

In that same skillet, melt 2 teaspoons of butter over medium-high heat. Add mushrooms and sauté until they’ve given up their liquid, salting about half way though. Add them to the bowl along with the bread.

Carefully wipe out the skillet and add the 2 tablespoons of butter. Sauté the onions, carrots and celery over medium-high heat until they have softened, but not browned, about 5 minutes. Add the parsley, thyme, sage, salt and freshly ground black and sauté one minute to incorporate. Add the vegetables to the bowl with the bread, sausages and mushrooms.

Whisk together the eggs and chicken broth. Stir the liquid into the bread mixture to moisten and toss well to coat. Coat a 13 x 9-inch baking dish with cooking spray, then spread the bread mixture evenly in the dish. Bake at 350 degrees F for 45 minutes. Serve warm. Yield 12 servings. 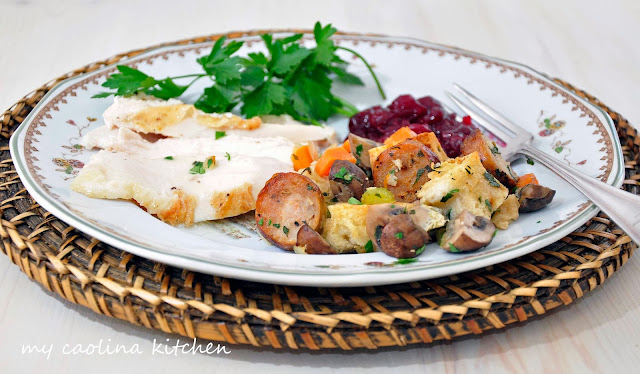 
Posted by Sam Hoffer / My Carolina Kitchen at 6:31 AM