As you know from my last post about the 4th annual blogger get-together at the home of Larry of Big Dude’s Eclectic Ramblings and his wife Bev, we spent the weekend partying with fellow bloggers and friends at the lake. You might recall that Penny of Lake Lure Cottage Kitchen’s husband David told Bev & myself about the special treat that he and Penny had in store for us for breakfast the next morning following the luau – and it was going to be shrimp and grits. If you have been reading My Carolina Kitchen for a while, then you know how much I love shrimp and grits.

I can’t wait to taste David & Penny’s version of shrimp and grits with andouille sausage. Andouille, for those of you who aren’t familiar with it, is a coarse-grained, smoked sausage most often associated with Cajun cooking in the US. It originated in France and was taken to the US by French immigrants to Louisiana. Pronounced ænˈduːi/ an-doo-ee in US English and in French ​[ɑ̃nduj]. To me it is a spicy, smoky sausage that brings a lot of flavor to the dish.

While David browns the andouille and bacon and sautés the chopped onion that will go with the shrimp, 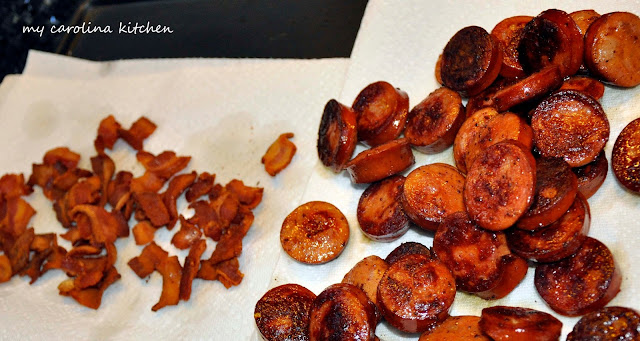 Penny grates the cheese for the grits. 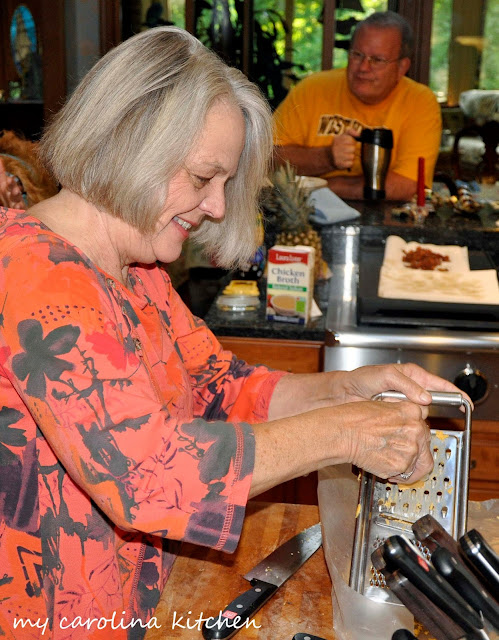 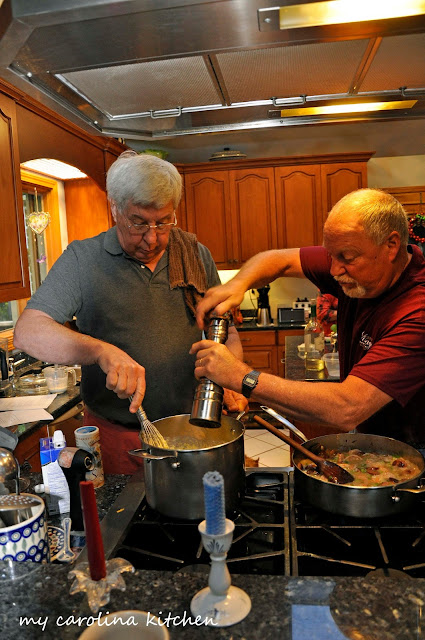 While the shrimp simmers on the stove. 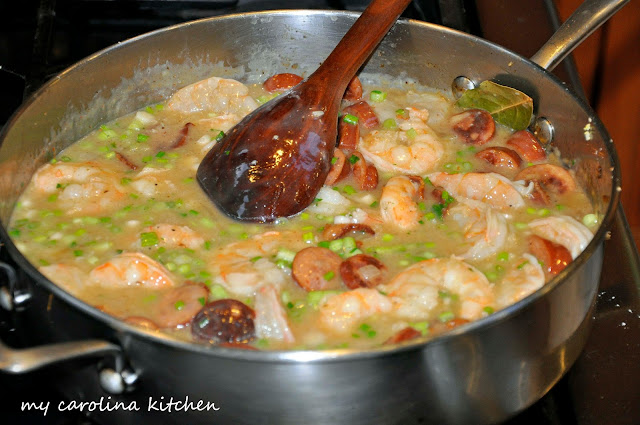 Here’s a bowl of the finished shrimp and grits, Penny's recipe here, along with her post about it with lots of great pictures. Notice the beautiful 10 to 15 count shrimp they found at their market. 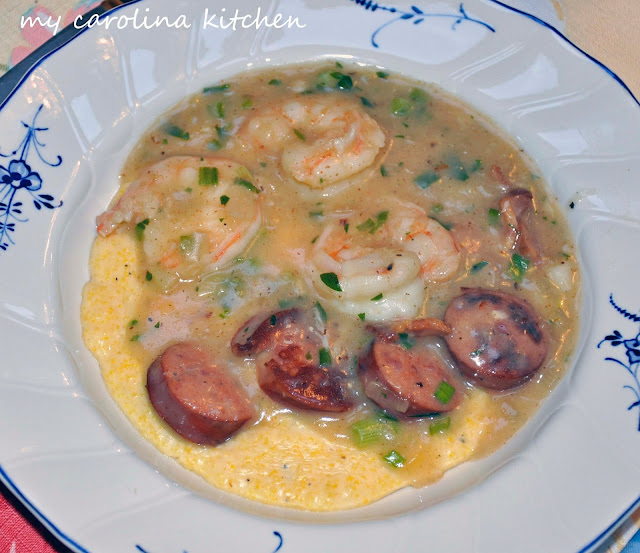 Larry offered to fry an egg for anyone who wanted one on their shrimp & grits – several did. 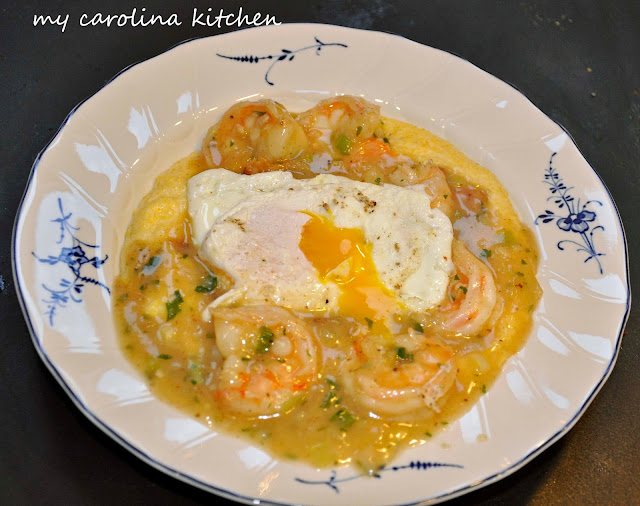 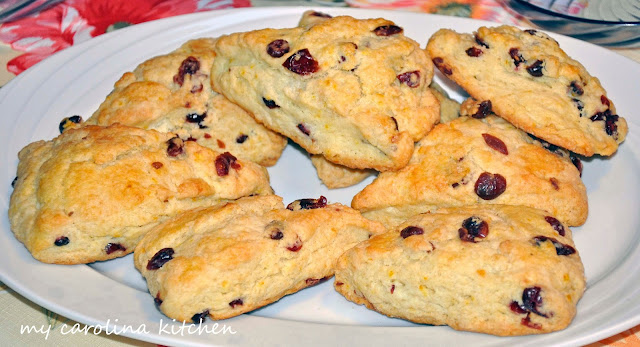 And delicious chocolate biscotti (Penny's recipe here) for dipping in your coffee. 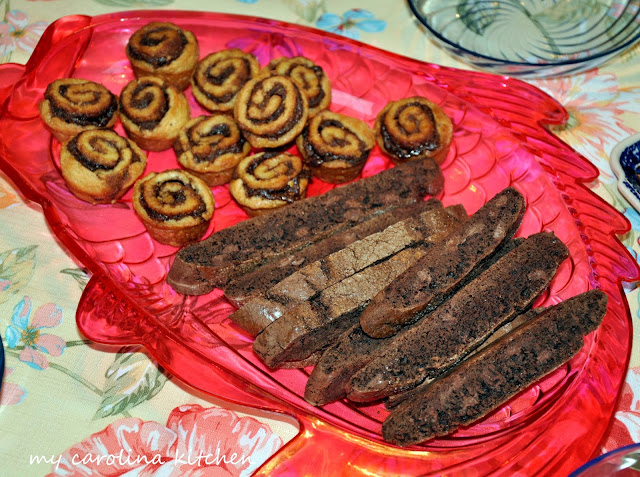 While David was cooking the bacon & andouille, I put together a big bowl of orange slices, red grapes, lightly sugared blackberries, and slices of fresh local mountain strawberries. 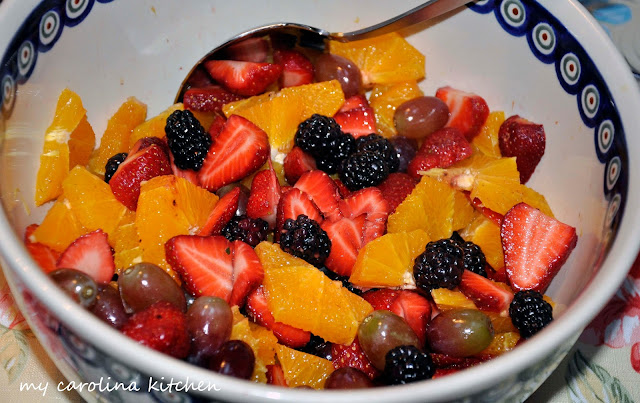 Everyone is seated around the table and ready to dig in to their bowl of shrimp and grits. Thank you Penny and David for this awesome gourmet breakfast. What a wonderful ending to a great get-together with friends and family. And a big thanks to Larry and Beverly for hosting the event. You guys are the best. 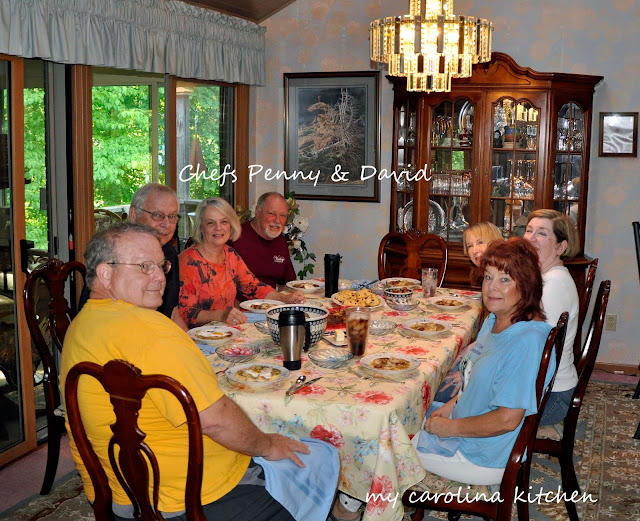 As a side note, we’re on the move again. We sold our condo this past January to the first people that looked at it and we’re currently remodeling and refreshing our new house where we’ll spend our winters. During our forty three years of marriage we’ve remodeled more than a dozen houses and really enjoy it. As we get older, we’ve come to realize that we can’t do everything ourselves anymore and have hired people to help us on this project.

If you follow me on Pinterest, then you know that I have as many or more decorating boards as I do food, France, and fashion (my first career). My favorite part of redecorating is choosing the colors and feathering the nest, but I also love to change the layout and re-arrange some of the walls in rooms when it’s called for. See the master bath below.

Our new house is an older home in an established neighborhood with lots of character, older trees, and established landscaping. Like any other older home, it needs plenty of updating. Here’s a preview of what’s going on right now with the crew in the master bedroom and bath. 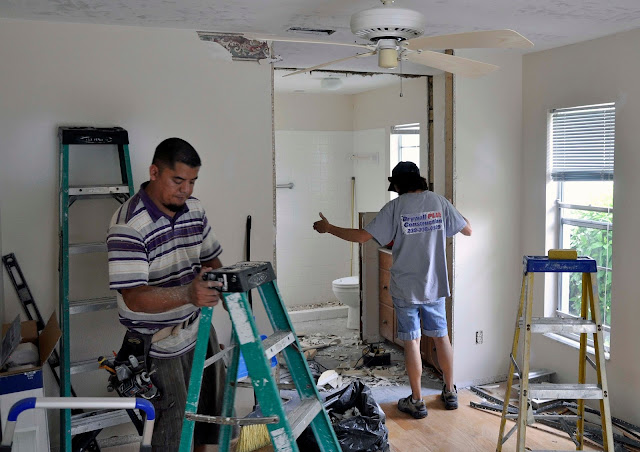 This is our dining room waiting for the trim carpenter to put down new baseboard down and install cove molding as will be done in all of the rooms. Trim makes all the difference in how a room looks. The sheetrock crew has already been in and removed the popcorn off of the ceiling. Popcorn is a bumpy ceiling finish that was once popular, but now makes a room seem dated.  It is one of the first thing people notice about your house and can affect its value. The reason the popcorn finish was used in the first place was that it was easy for builders to apply and also helped to hide a multitude of sins. It is also a gigantic mess to remove as you can see from this article and best done before you move in while there’s no furniture in the rooms. After the popcorn was gone, the ceilings were lightly skip-toweled in preparation of the painter’s arrival in a couple of weeks. 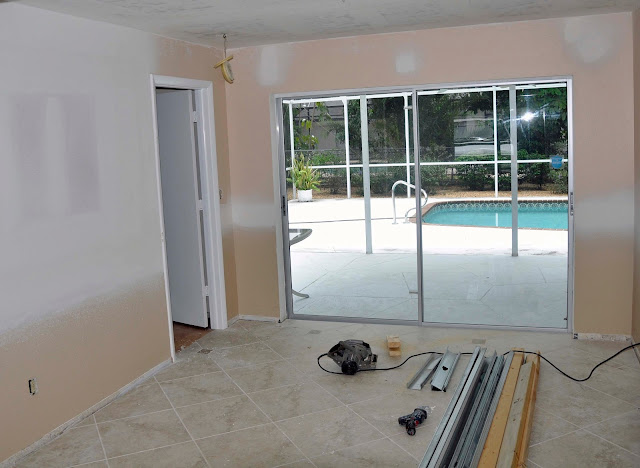 As much as we would like to re-do the kitchen, it will have to wait until next year. We will really miss our remodeled kitchen in the condo with all of its built-ins and drawers and new appliances. Below is what the kitchen looked like when we first saw the house. It doesn’t look too bad, but with a fresh coat of white paint and the removal of the previous owner’s blue bric brac and valances, it will do for now. We have plenty of time to plan for new appliances and we want a wall oven and hopefully a gas cook top and of course new cabinets with lots of drawers and storage. Fortunately the kitchen offers a great view of the lanai and the pool. We’re also excited that the house faces south, so the lighting should be good all day long in the kitchen (and for taking food pictures).

As you can see, I will be very busy for the next month or so. I have a couple of posts prepared, but we will be without internet service part of the time. I hope to visit your blogs and continue to post as much as possible, but if you notice my absence, you will know that I’m temporarily up to my ears in projects. Once the remodeling is complete, we’ll pack, move, unpack, and get the house set up for next season. Once we get things back to normal here we’ll return to the mountains to enjoy some cool weather and take at easy during the summer.

Posted by Sam Hoffer / My Carolina Kitchen at 6:22 AM