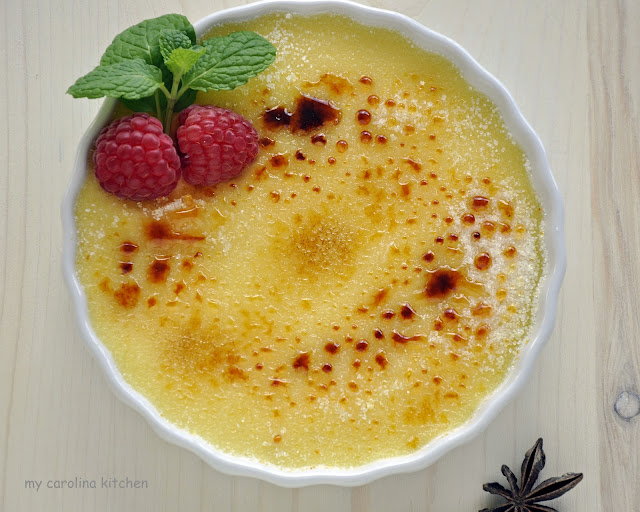 Crème brulee is one of the most amazingly elegant French desserts ever created. It’s also a real crowd pleaser, especially with the men. Crème brulee (pronounced "krem broo-LAY") means “burnt cream” in French and the caramelized sugar on top of the custard characterizes the dish.

Surprisingly it’s very easy to make. Crème brulee is basically custard with nothing but eggs, cream and sugar, plus a little vanilla for flavor. All you need is time to let it rest overnight in the refrigerator and have a little patience between the steps and you’ve got it made. 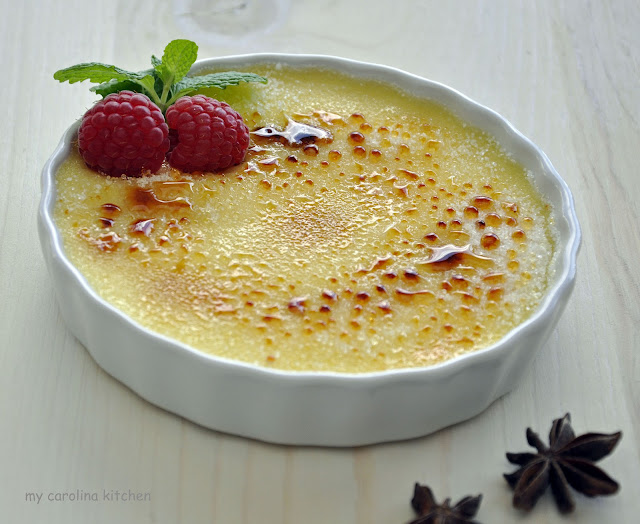 It’s even easier to make if you solicit the help of your husband, which I’ve done in this case. It’s one of Meakin’s specialties and he enjoys playing around with the seasonings. You can add flavors such as Grand Marnier, lavender, citrus, or in our case star anise and cinnamon. Don’t be afraid of the flavorings. They are very subtle. You could also make your own vanilla sugar for the sugar on the top. Meakin lightened it up a bit and zapped away a few of the calories by substituting half and half for some of the cream. He follows the basic recipe from Ina Garten, The Barefoot Contessa, and goes from there. Here is an excellent tutorial on how to caramelize the top of the crème brulee that I found very helpful. We try to eat healthy, so we only prepare this when we're having guests. After all, we need someone to help us eat the six servings.

Often we’ve let our dinner guests brulee their own with the torch, but I offer this suggestion with a warning. Make sure they haven’t had too many martinis or glasses of wine, otherwise you might be asking for a kitchen disaster.

As the Barefoot Contessa likes to say, “Your guests may not recall what you served for dinner, but they will always remember the dessert.” And crème brulee is one of the most memorable desserts of all. 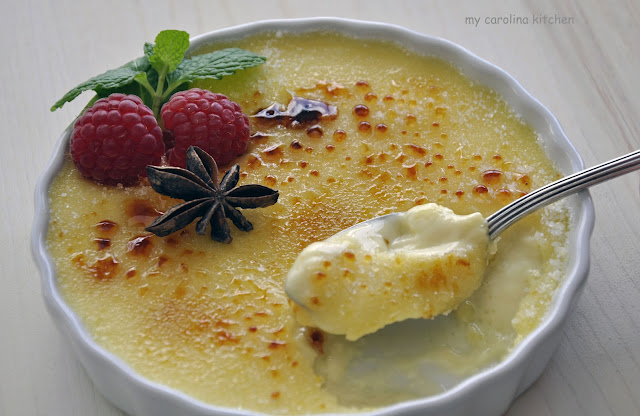 In the bowl of an electric mixer fitted with a paddle attachment (or you can use a handheld mixer), mix the egg, egg yolks, and ½ cup of the sugar together on low speed until just combined. Meanwhile add the star anise and cinnamon into the cream, then scald the cream and half and half in a small saucepan until it’s very hot to the touch but not boiled. Remove the star anise and cinnamon and set aside. With the mixer on low speed, slowly add the hot cream to the eggs. Add the vanilla and orange liqueur.

When the cream has cooled, add the star anise and cinnamon stick again, then place the cream in a bowl and lay plastic wrap over the very top of the cream to prevent a skin forming. Refrigerate overnight for the flavors to meld.

The following day preheat the oven to 300 degrees F. Remove the cream from the refrigerator, then remove the star anise and cinnamon stick and discard. Pour the cream into 6 to 8 ounce ramekins until almost full.

Place the ramekins in a baking pan and carefully pour boiling water into the pan to come halfway up the sides of the ramekins. Bake for 35 to 40 minutes, until the custards are set around the edges and wiggly in the center when gently shaken. Remove the custards from the water bath, cool to room temperature. and refrigerate until firm.


It’s been quite cool in south Florida the last day or so. This morning the local weather report said it was a breezy 39 degrees. The temperature is always a bit warmer on the water and it was 44 on our lanai when we got up this morning. A little known fact about Sanibel and Captiva Island (knows as “the islands” in Fort Myers): Anne Morrow Lindbergh, wife of the famous aviator, wrote her best-selling love letter, A Gift From the Sea, without ever identifying it as Captiva Island.

When we lived in the Bahamas, if there was a cold front in the forecast, our friend Silbert always started his weather report for the Cruiser’s Net with, “Tonight you’ll need a side blanket as our forecast calls for a cold front to approach our area late today.” A side blanket, for those of you who don’t know and we didn’t either the first time we heard it, is a person to snuggle to in the bed on a cold night. So much more romantic for Valentine’s Day than an electric blanket don’t you think? 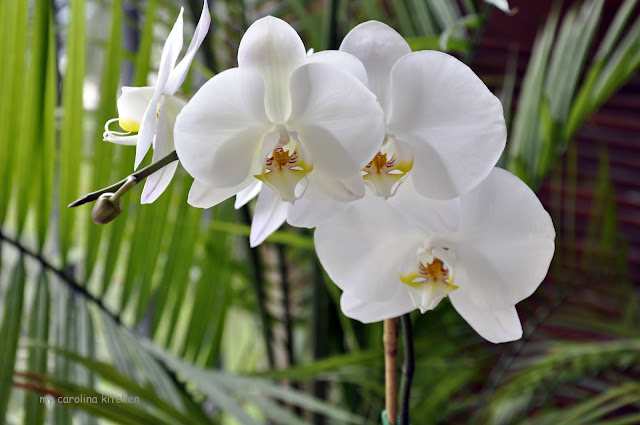 Happy Valentine’s Day from Meakin & Sam. The orchid is a valentine to me from my very special valentine. 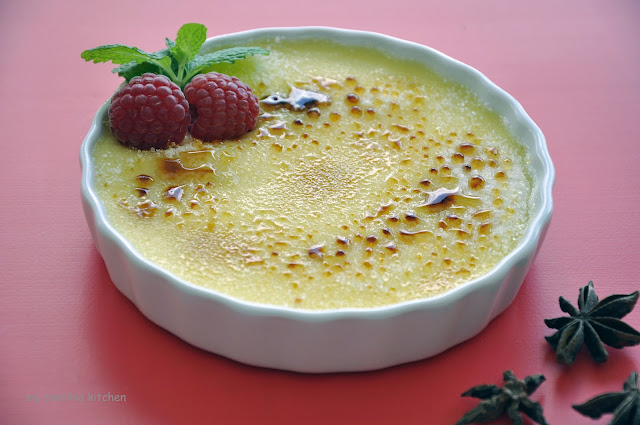 Posted by Sam Hoffer / My Carolina Kitchen at 5:03 PM

Email ThisBlogThis!Share to TwitterShare to FacebookShare to Pinterest
Labels: dessert