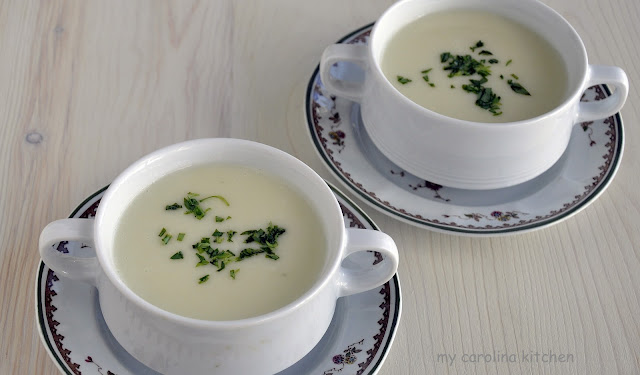 Potage Parmentier, better known as Leek and Potato soup, was one of my late father-in-law Jim’s favorite soups and one he prepared almost every week. Jim passed away late this October peacefully in his sleep of natural causes. He missed celebrating his 99th birthday by about five weeks. He was quite the gourmet cook and during his career ate in some of the finest restaurants in Manhattan. Jim still lived at home and cooked most of his own meals. He kept his mind sharp doing the New York Times crossword puzzle and reading. He was trim and slim, stopped smoking when the Surgeon General told the world to stop a zillion years ago, and was the picture of good health.

People have asked did Jim know the secret of how stay in good health as you age. He would have probably told you no, but I’ll share some of my observations of his eating habits that I think contributed to his good health.  His style of eating was very similar to the Europeans, in that he enjoyed the art of dining, always had his meals at the dinner table, and sipped a glass of wine during conversations at dinner at a leisurely pace. His diet was well balanced, he didn’t eat “on the run,” never ate in-between meals or indulged in snacks or junk food, and would not eat anything that did not taste good even, if it was a food he enjoyed. As an example, recently I sliced a cantaloupe for breakfast for him, which I knew he liked, and noticed he took only one bite. When I asked why he didn’t finish his cantaloupe, he said, “It didn’t taste good.” I looked down at my own plate and noticed that I had eaten all of my cantaloupe and just realized when he said it that mine didn't really didn’t taste good either. An “ah ha” moment for me.

Any dish whose description contains the word “Parmentier” will contain potatoes – a handy thing to know when reading a French menu. Potage Parmentier is named after the Frenchman Antoine Augustine Parmentier, a mid-18th century potato advocate. Julia Child called Potage Parmentier “simplicity itself” in Mastering the Art of French Cooking. It’s also a very versatile soup base. For instance, just add watercress and voila, you have watercress soup. Chill it and you have vichyssoise. It doesn’t get much simplier than that. 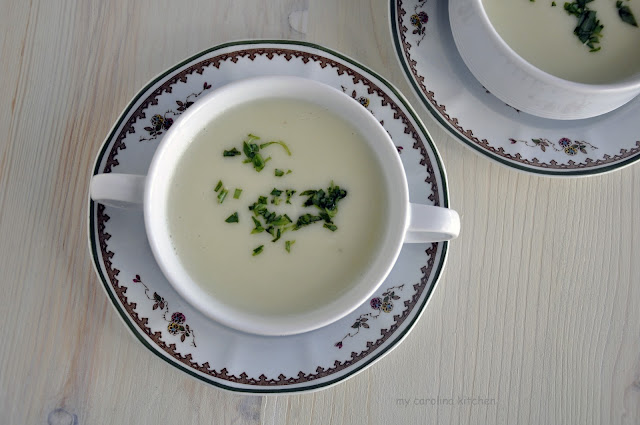 Combine the potatoes, leeks, and water in a large saucepan. Bring to a boil over high heat and add some salt and pepper. Reduce the heat and simmer gently until the potatoes and leeks are very soft, about 25 to 35 minutes, depending on the size of the potatoes.

Carefully puree the soup in a blender or a food processor (or pass through a food mill). Return to the saucepan. Add the cream and cook over low heat just until heated through. Adjust the salt and pepper and serve garnished with the fresh herb of your choice. Can be kept covered in the refrigerator for several days. Reheat gently. Serves 4 to 6.

This recipe will be linked to Foodie Friday at Designs by Gollum and Miz Helen’s Full Plate Thursday.

Posted by Sam Hoffer / My Carolina Kitchen at 6:52 AM