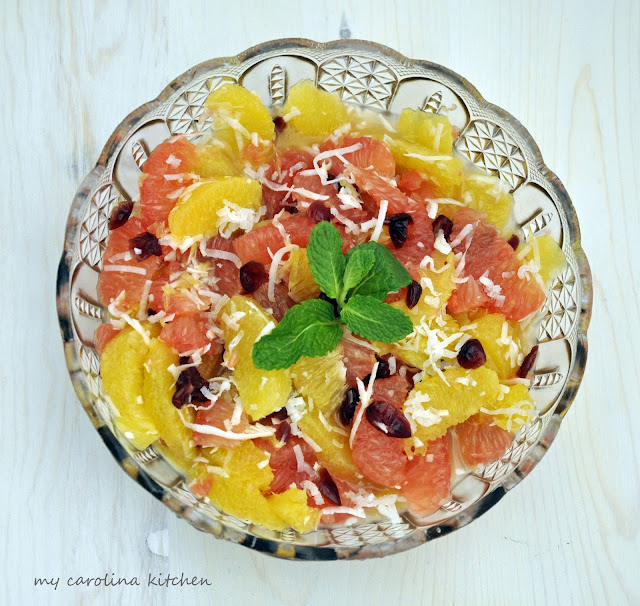 As a child of the Deep South, ambrosia was always among the desserts my grandmother served at her holiday table. According to Greek and Roman mythology, ambrosia is food of the Gods.

An internet search revealed there are a lot of different ambrosia recipes, some containing apples, pineapple, sour cream, Cool Whip, marshmallows, or pudding. The Deep South Southern ambrosia I recall from my youth was a simple dessert consisting of seasonal winter citrus, such as oranges and grapefruit, garnished with flaked coconut. This is my best recollection of my Nanny’s ambrosia. The addition of the dried cranberries and a splash of Grand Marnier are my own. It's best served during the winter months when citrus fruits are at their peak. Even after all these years, my grandmother's recipe is timeless and contemporary.

Serve in your finest crystal bowl, or as I did in this case, a bowl from Meakin’s mom’s Early American Feather Glass collection. Food of the Gods deserves the best. 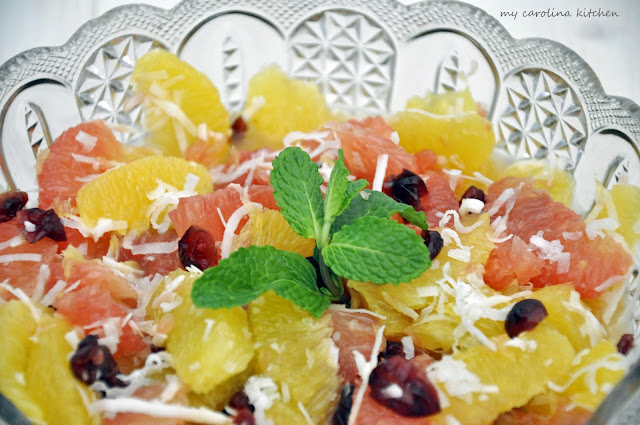 With a sharp knife, remove the peel of the grapefruit and oranges and discard. Over a large bowl, remove the individual sections (called supremes) of the citrus with a knife, letting the juices and the sections fall into the bowl. Drain the juices and save for breakfast or cook’s treat.

Soak the dried craisins if using in a bit of hot water to plump, then drain well. Add the craisins to the citrus supremes, along with about a half cup of flaked, sweetened coconut or to taste. I added a splash of Grand Marnier for extra flavor, but it’s neither traditional nor necessary.  Add a sprig of fresh mint for garnish, or julienne the mint at the last minute and add just before serving.

Posted by Sam Hoffer / My Carolina Kitchen at 6:43 AM

Email ThisBlogThis!Share to TwitterShare to FacebookShare to Pinterest
Labels: dessert