Cheerwine, BBQ and NASCAR - It's a Carolina Thing 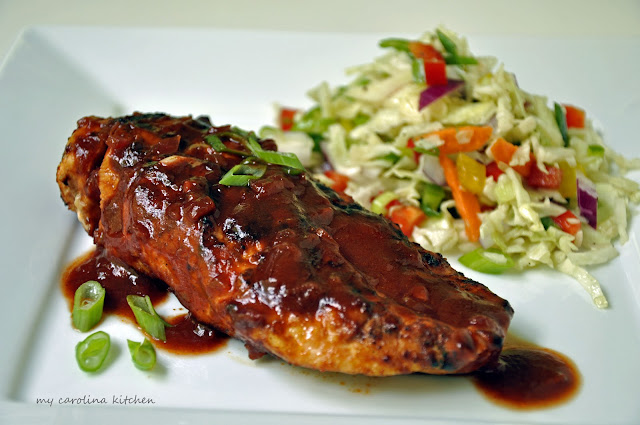 I wrote this story a couple of years ago for the North Carolina Writer’s Association as one of my contributions to an anthology about North Carolina. Cheerwine, as you’ll read below, is a burgundy color cherry cola drink similar to Dr. Pepper or RC Cola, Coke, or Pepsi. The distribution of Cheerwine has widened through the years and you can often find it where NEHI soft drinks are sold. I’ve read that most Fresh Markets now sell Cheerwine. You can also click the Cheerwine link to see if it available in your area. Feel free to substitute the cola of your choice if you can’t find Cheerwine. This is a versatile BBQ sauce that is good on chicken or pork. 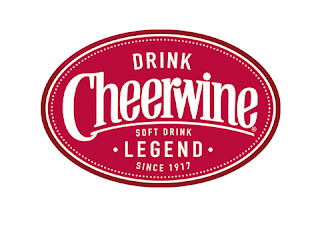 Nothing says Carolina like Cheerwine, BBQ and NASCAR
Cheerwine, first bottled in 1917, is still a popular soft drink in North Carolina. Although this burgundy colored cherry soda with lots of bubbles is the red color of grapes, it doesn’t contain any wine or alcohol. During that era it wasn’t unusual to give it such a name. Other soft drinks of the time, such as ginger ale and root beer, combined a flavor description with the name of an alcoholic beverage. Cheerwine is as much a part of North Carolina culture as BBQ and NASCAR.
BBQ is serious business in North Carolina and there can be heated discussions on which sauce is the best, eastern or western style. Along the coast, easterners insist that their vinegar based sauce is the original American BBQ sauce and, when being served a pulled pork sandwich, it’s not unusual to be asked if you would like slaw on it. On the other hand, high in the western mountains, aficionados prefer a thicker tomato based sauce.
NASCAR and racing have deep southern roots in North Carolina. Well known NASCAR race car driver Junior Johnson, born in rural western North Carolina in 1931, was behind the wheel of his daddy’s pickup truck at eight. When he reached fourteen, he became part of the family business and delivered moonshine throughout the backwoods. Johnson was an aggressive driver and often found himself in the winner’s circle when his fellow moon shiners held informal races in their souped-up delivery vehicles. With a number of unofficial wins under his belt, Junior entered professional stock racing and went on to win forty seven poles and fifty NASCAR Winston Cup series races. In 2000 he was inducted into the North Carolina Auto Racing Hall of Fame.
The heart of NASCAR country is in Charlotte, North Carolina. In 1949 NASCAR held its first strictly Stockcar Race at the Charlotte Speedway. Lowe’s Charlotte Motor Speedway, the one and a half mile super speedway, is where most drivers now call home.
Tailgating before the races is part of a rich tradition for NASCAR spectators. Sometimes tailgating parties can last for days as fans gather around for simple, hearty meals cooked and served outdoors and prepared on either elaborate grills towed behind their trucks or the more simple Weber types. Southern-style BBQ meats play a starring role in the camaraderie of this ritual. Meals can range from being served on fancy linen tablecloths with silverware to simple help yourself foods piled high on paper plates. So if you’re headed to a NASCAR tailgating party, whip up a batch of this tasty western style Carolina BBQ sauce using Cheerwine instead of moon shine. Take it along to baste your grilled pork or chicken.
Combine three cups of Cheerwine, one and a half cups of ketchup, one quarter cup of apple cider vinegar with a couple of cloves of chopped garlic, and one teaspoon each of chili powder, ground cumin, dried oregano and paprika. Add one quarter teaspoon ground allspice, a couple of healthy dashes of Worcestershire sauce, and season with salt and pepper. Place in a saucepan over high heat and bring to a boil. Reduce heat and simmer about forty-five minutes or until thickened. Allow to cool. To perk up the flavor, add a little squeeze of fresh lemon juice, hot sauce to taste, and check for salt and pepper. Makes two to three cups. Use to baste pork or chicken during the last fifteen to twenty minutes of grilling. Feel free to add your own special touches. That’s the fun of BBQ - making it your own.
Cheerwine, BBQ and NASCAR. It’s a Carolina thing. 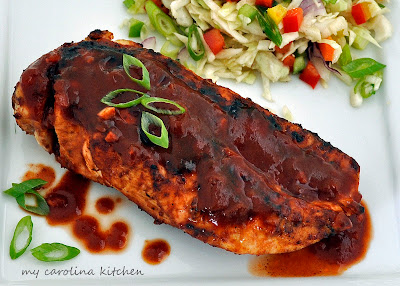 I will be linking this to Foodie Friday at Designs by Gollum and On the Menu Monday at Stone Gable.
Posted by Sam Hoffer / My Carolina Kitchen at 7:33 AM