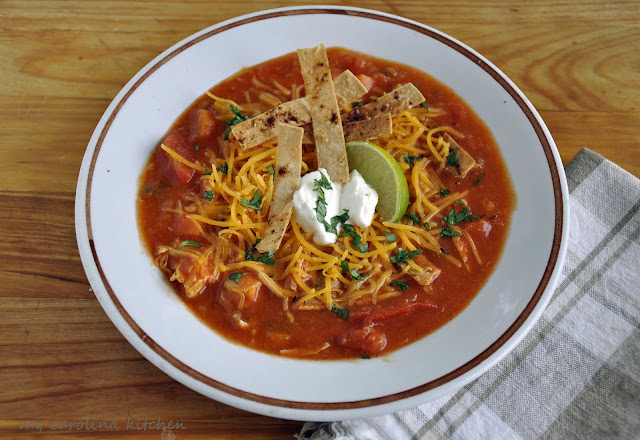 One of the things I like about recipes from Ina Garten (The Barefoot Contessa) is that you always can count on them to turn out great. This soup is no exception. It’s rich tasting yet not filling, feeds a multitude, is colorful, can be spicy if you choose to include some of the seeds from the jalapenos, and will take care of any cravings you have for Mexican food.

There’s also a bonus recipe in this or what you might call “a recipe within a recipe.” In the first step, Ina cooks the chicken breasts in the oven at 350 degrees F for about 35 to 45 minutes and they come out juicy, tender, and delicious. I use this method almost exclusively now as my go-to recipe when I want roasted chicken breasts. As an example, they are perfect for chicken salads and sliced chicken sandwiches. Plus the recipe is foolproof, easy, and has become a staple in my kitchen.  For that reason I sometimes cook the chicken ahead (since I’m roasting them anyway for another meal) and leave them covered in the refrigerator until I start to prep the ingredients for this soup.

Speaking of tortilla chips, when we were ready to garnish the soup for the photo, I said to my photographer (who also happens to be my husband Meakin), “Take a look at the photo of the soup in Ina’s cookbook. It looks like she made her own chips instead of using store bought ones. I’d love to do that, but I don’t want to add more fat and calories to this recipe by frying tortillas.”

Great cook as he is, he replied, “Give me the corn tortillas you have left in the refrigerator. I’m going to try something. If it turns out good, we’ll share it. If it doesn’t, we won’t. Fair enough?”

Fair enough indeed. It was a huge success, so here’s Meakin’s method of making homemade strips of corn tortillas without frying them to garnish Ina’s Mexican soup. 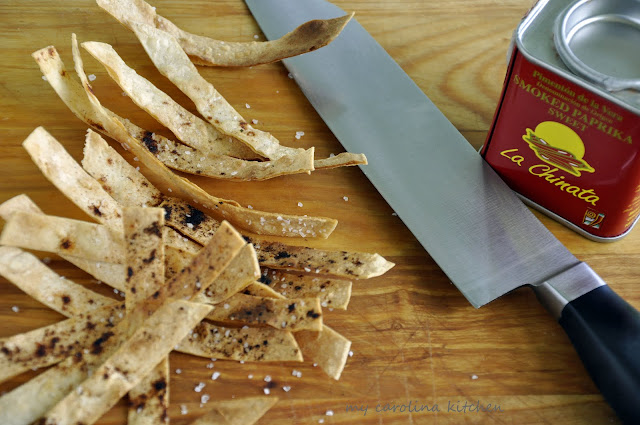 Using 6” white corn tortillas, cut into ½” strips. On one side spray with a cooking spray such as Pam, sprinkle with kosher salt and smoked sweet paprika (also known as Pimenton) or ground cumin, place on a sheet pan and broil for a minute or two until they start to brown and turn crisp. Remove from the oven, flip the strips over, spray with the cooking spray again and season with more kosher salt and paprika or cumin. Broil the second side until brown and crispy. Remove from the oven, break the strips in half if desired and serve immediately as a garnish for soup. 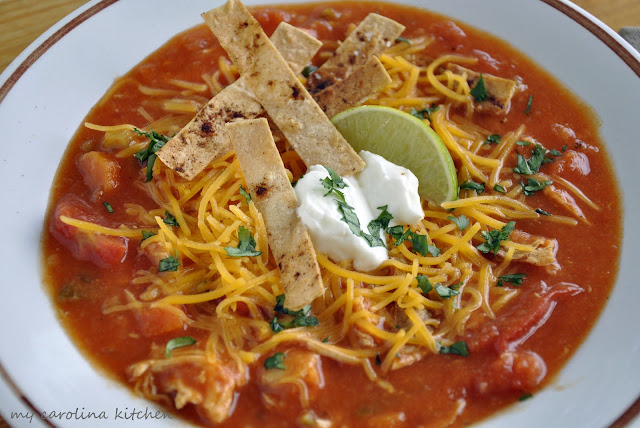 Preheat the oven to 350 degrees F. Place the chicken breasts skin side up on a sheet pan covered in heavy duty foil for easy clean-up. Rub the chicken with olive oil, sprinkle with salt and pepper, and roast for 35 to 40 minutes, until done. Check with a instant read thermometer and when it reaches 160 degrees F, it’s done. Remove from the oven and set aside to cool. When the chicken is cool enough to handle, discard the skin and bones and shred the meat. Cover and set aside.

Cooks note: Chicken can be cooked a couple of days in advance. Store covered in the refrigerator, but don’t shred it now. Instead, on the day you plan to serve the soup, bring the chicken to room temperature and shred it then, not as instructed above.

Meanwhile, heat 3 tablespoons of olive oil in a large pot or Dutch oven. Add the onions, celery, and carrots and cook over medium-low heat for 10 minutes, or until the onions start to brown. Add the garlic and cook for 30 seconds. Add the chicken stock, tomatoes with their puree, jalapenos, cumin, coriander, and salt and freshly ground black pepper. Cut the tortillas in 1/2, then cut them crosswise into 1/2-inch strips and add to the soup. Bring the soup to a boil, then lower the heat and simmer for 25 minutes. Add the shredded chicken, chopped cilantro and check for seasonings, adding more salt and pepper to taste. Serve the soup hot topped with any or all of the garnishes and crumbled tortilla chips. Or better yet, make your own tortilla strips, recipe above. Leftovers keep nicely covered in the refrigerator for several days.

I am linking this to Stone Gable's On the Menu Monday, so be sure to drop by for a visit. 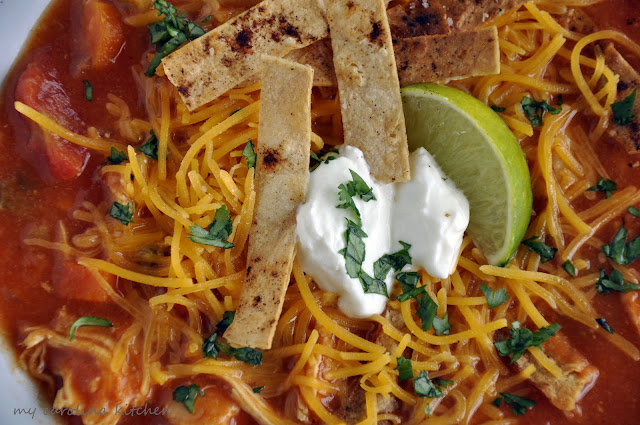 Posted by Sam Hoffer / My Carolina Kitchen at 6:52 AM