A tour of Thomas Edison’s Winter Home in Ft. Myers, Florida on the banks of the Caloosahatchee River

“Seminole Lodge” is Thomas Edison’s winter estate, located on the banks of the Caloosahatchee River in Ft. Myers, Florida. The home, grounds, gardens and his laboratory, along with his good friend automobile magnate Henry Ford’s home, “Mangos,” are open for the public to tour daily 9:00 am – 5:30 pm. If you’re in the area, it is a “must see” for all ages.

Thomas Edison was considered one of the most prolific inventors in history. Many of his inventions we enjoy today, including the electric light bulb, the phonograph and the motion picture camera.


Spacious verandas and 14’ wide porches provide cooling ventilation for the Edison home, built in 1885. The spacious guest house is connected to the main house by covered walkways. The Edison’s guest list included great inventors of the time, including Harvey Firestone and Henry Ford. Henry Ford eventually bought “Mangos,” the home next door, in 1916 to spend his winters with his good friend and neighbor, Thomas Edison. After Edison’s death, Ford sold his home and never returned.


Living room of the Edison home, furnished in comfortable wicker.


One of 13 individually styled brass electroliers throughout the home, patented and manufactured exclusively for the Edison Company. The original bulbs still burn.

This is a glimpse into the Edison’s Florida kitchen, where you can imagine servants preparing platters of mangos and glasses of freshly hand-squeezed orange juice for breakfast for their guests escaping the cold from the north. Look at the old fashioned "ice box" in the background of the butlers pantry.

One of the servants rooms

The Edison’s master suite is separate from the main house, connected by a spacious porch. It is comprised of a two bedroom suites, one for Thomas and one for Mina. 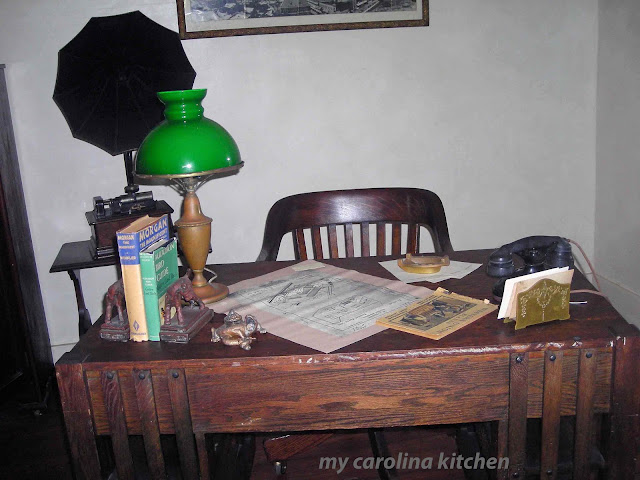 Thomas Edison had a pool constructed of Edison Portland Cement built for his family and guests in 1910. At the time it was among the first modern swimming pools. Interestingly, Edison never used the pool himself as he did not believe in exercise.


One of the old cars on exhibit


Thomas Edison spent many long hours in his laboratory, often taking cat naps on a near-by cot. Only four people worked in the lab itself with Edison: a clerk, chemist, machinist and a glassblower. Each was able to multi-task on all aspects of the project. The laboratory looks just as it did the last day in June of 1931, when Thomas Edison left to return to his home in New Jersey and died that October at age 84.

During World War I, Edison and his friends, Henry Ford and Harvey Firestone, became aware that the supply of rubber in the US would be cut off and there would be major costs to their respective industries. Together in 1927 they set up and funded the Edison Botanical Research Company.

Edison tried several thousand plants and decided to concentrate on goldenrod, a common weed that causes thousands of us to sneeze from allergies, which grows up to 3-4 feet with a 5% yield. He developed a strain that grew to a height of 12 feet and had a yield of 12% latex. Rubber research and experimentation continued after Edison’s death under the leadership of his brother-in-law.

I couldn’t help but think, as we walked to our car parked near the huge old banyan tree near his laboratory, of the three old friends, all geniuses of their time, sitting under the ancient tree, chit chatting and bouncing ideas off of each other that would affect generations to come.

Much of the information provided here today came from the Edison & Ford Winter Estates literature provided during the tour.


This will be linked to Oh The Places I've Been at The Tablescaper.

Posted by Sam Hoffer / My Carolina Kitchen at 1:48 PM