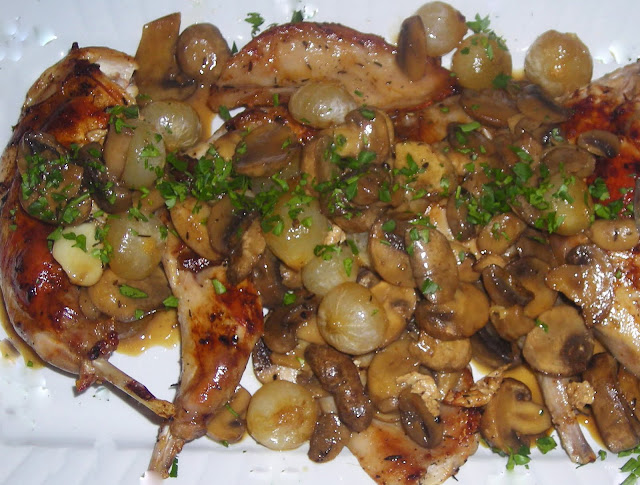 Lapin a la Chasseur
Every time I think about rabbit, or lapin as it’s called in France, I think of a charming story I read about an American family from South Carolina that moved to France. The father worked for the Michelin Tire Company and was transferred, so he took his wife and family with him. They had two small children and the little girl was having difficulties learning French, so the mother asked the neighbor, a grandmotherly type, if she would help her daughter. The neighbor took the girl under her wing and one day they were on a walk and saw a rabbit in the garden. The grandmother told the little girl that it was called lapin. The little girl said, “He’s so cute.” “Non,” the grandmother replied, “delicieux.”
If you don’t like rabbit, don’t worry. The French Impressionist Claude Monet didn’t eat rabbit either. Who would dare to say the famous Monet didn’t have good taste. Just enjoy the photos for today. They are from L’Isle Sur la Sorgue, a charming French village with river canals of crystal blue water from the Sorgue River running between its ancient streets. There are several large old waterwheels that still turn. Sunday is the most popular day of the week in L’Isle Sur la Sorgue, because they hold a huge antique and flea market in conjunction with their farmers market. The village is a “do not miss” in travel guides. I hope you’ll enjoy them. 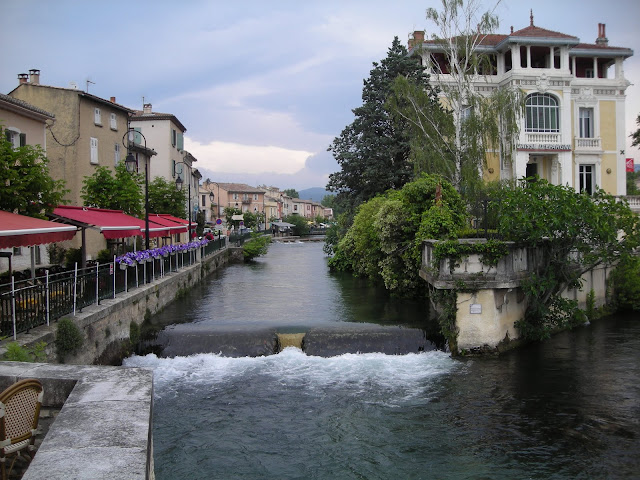 Because, as the grandmother said, the French think rabbit is delicious, we wanted to try to make it at home. We’d heard that rabbit was difficult to prepare because it’s often dry in texture. We’d made difficult dishes before, so as you can imagine, that didn’t’ stop us. One day while shopping at a butcher shop in a nearby town, we saw a package, so we snapped it up. As soon as we returned home we looked through all of our cookbooks for recipes for rabbit and found Lapin a la Mourtarde, meaning with mustard. In the past we’d used a similar recipe for chicken with mustard, carrots and onions that had been a success and decided to give it a try. We made every effort not to overcook it, but it turned out dry and we didn’t like it, although the sauce was delicious. 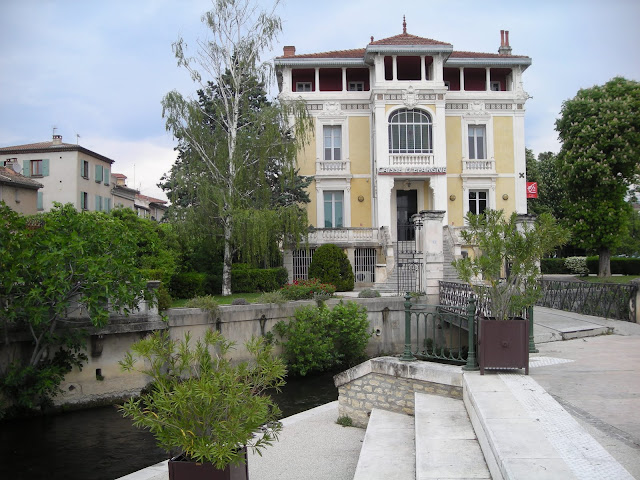 When we were in France, we asked Claude and Dana, owners of Bistro Decoverte, one of our favorite bistros in Saint-Remy, “Do you ever have lapin as your plat du jour?
“Not often,” Claude replied. “Why?” we asked. “Because it doesn’t sell well? “No,” he said, “actually it sells quite well, but it’s difficult to prepare.” Whew, even a Frenchman thinks it’s hard to prepare. It’s not just us. We told him to call us if he ever happened to have it on the menu and left it at that.
The next week I was walking along the boulevard when I heard someone call my name. Surprised that I might know someone in Saint-Remy, I looked around. It was Dana, Claude’s wife. We’re having lapin this Sunday she said. Would you like to make a reservation? Needless to say I said, “Oui Dana, s’il vous plait.” The lapin was delicious and was prepared a la Moutarde, with a mustard sauce. Claude quickly sold out of it and, much to our good fortune, featured it several more times during our stay. 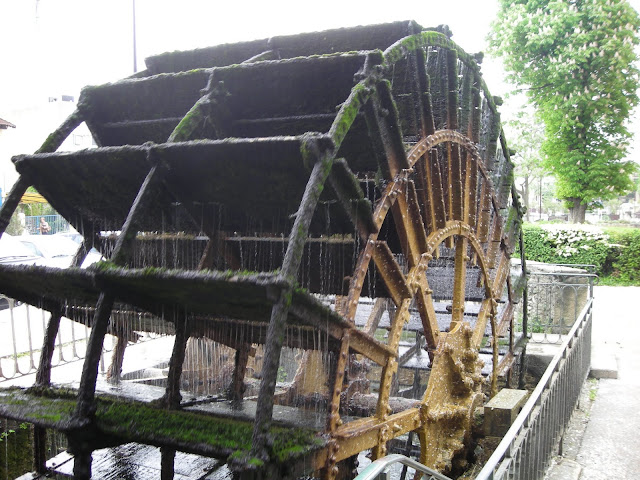 When we returned home I was flipping through Mark Bittman and Jean- Georges Vongerichten’s cookbook, Simple to Spectacular, and ran across a recipe for Lapin a la Chasseur and decided to give rabbit a second change in my kitchen. Thanks to their excellent instructions, it turned out great and, as the French grandmother would say, delicieux. Because of their reputation and the fact that we’d failed before, I didn’t make many changes. I mean, who would have the audacity to think they could improve on a recipe from Jean-Georges? Not moi for certain. However, I took two shortcuts and used frozen little pearl onions and bought pre-sliced mushrooms. Rice or buttered noodles and a green salad make a nice accompaniment. 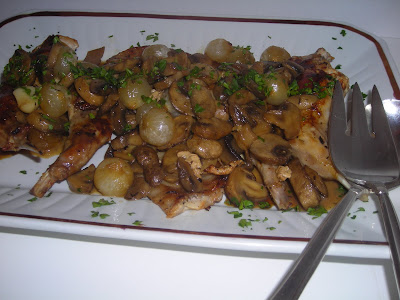 Lapin a la Chasseur
Adapted from Simple to Spectacular – serves 4
One 2 – 3 lb rabbit, cut into 10 pieces
Kosher salt and freshly ground black pepper
4 tablespoons extra-virgin olive oil
8 cloves garlic, peeled and lightly crushed
4 sprigs fresh thyme
15 small pearl onions, peeled (thawed and patted dry if using frozen)
8 ounces sliced white button mushrooms
½ cup dry white wine
1 tablespoon sweet butter
¼ cup minced fresh chives or parsley for garnish
Preheat the oven to 400 degrees F. Season the rabbit with salt and pepper. Heat oil in a large ovenproof Dutch oven over medium high heat. Add rabbit pieces (do not crowd the pan; may have to do more than one batch) and turn the heat to high. When the rabbit begins to brown, turn heat down to medium and add garlic and thyme. When it’s nicely browned, stir in the pearl onions and mushrooms and put the pot in the oven for 15 minutes.
Remove all but the legs from the pot to a platter, cover and keep warm. Add wine, stir and return to the oven for another 10 minutes.
Remove pot from oven and return to stove top. Remove legs and set aside on platter with remaining pieces. Add butter to cooking liquid in the pot and stir until butter melts. Taste and add salt and pepper if desired. Spoon sauce over the rabbit and serve, garnished with chives or parsley. 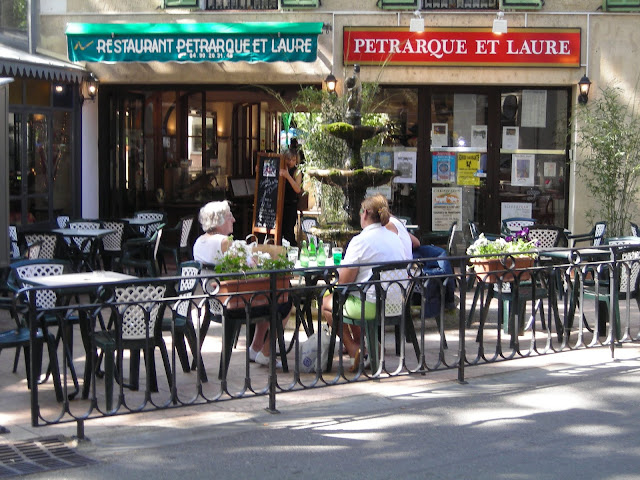 Posted by Sam Hoffer / My Carolina Kitchen at 6:10 AM

New comments are not allowed.