Oven Baked Pancake / Popover – so easy it practically makes itself 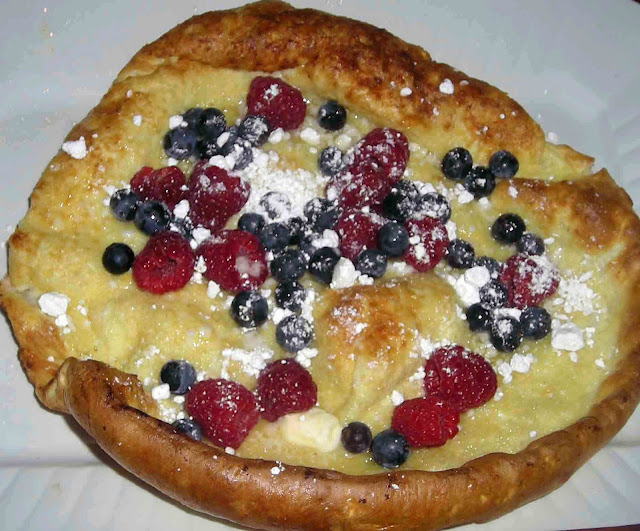 Some people call this oven baked pancake / popover a Bismarck while others call it a Dutch Baby Pancake. Both are baked in a black cast iron skillet in a hot oven where they puff up dramatically in a few minutes and make an impressive breakfast dish. The Bismarck was one of the most popular recipes in the original Silver Palate Cookbook, one of the best selling cookbooks of all time which has recently issued a 25th anniversary addition. It can be served plain with powdered sugar and fresh lemon wedges or gussied up with fresh fruit or sautéed sliced apples.

The first time we ate a Bismarck was in 1995 when we lived in the Abaco Islands in the Bahamas. One evening good friends invited us for an elaborate gourmet dinner at their home and extended an invitation to stay over for the night. Nasty weather was predicted and they didn’t want us driving the boat home in the dark. How could we decline an invitation such as that? Besides, our friend Tony was the Julia Child of our crowd. The next morning his wife Diane, also a fine cook, prepared their favorite breakfast – a Bismarck straight out of The Silver Palate Cookbook. We watched as Dianne quickly whirled flour, milk and eggs in a blender until she had a smooth batter. Meanwhile Tony melted some butter in a black cast iron skillet and, when it was melted, poured the batter in the pan and popped it in a hot oven for ten minutes or so. It rose like a popover and we instantly fell in love until we realized Tony had used a whole stick of butter for one pancake.

Even though it’s an easy recipe, it’s only been in the last five or six years that I’ve mustered up the courage to give it a try. Why you ask…well, the original recipe called for 8 tablespoons of butter, in other words an entire stick. One day I read that if you have a well-seasoned cast iron skillet, it can double as a non-stick pan. A light went on in my head. By gosh, they are right. So I decided to reduce the butter in the original Bismarck recipe to two tablespoons and give it a try. I didn’t have much to lose and the basic ingredients were cheap – eggs, flour and milk. The results produced a success and we didn’t miss the other 6 tablespoons of fat. I also added a pinch of salt and some freshly grated nutmeg to the batter. We served it with confectioner’s sugar and lemon wedges, just like we’d always done with popovers. I also added some fresh raspberries and strawberries and it was an instant hit. In the winter we like to sauté apples, season them with cinnamon and sugar and use them in place of the fresh berries.

It’s funny how things can happen in your life that parallel other people’s experiences and you don’t even realize it at the time. (I would love to hear if it’s ever happened to you.) Molly Wizenberg, author of A Homemade Life and the immensely popular blog Orangette, tells a similar story about the first time she had the pancake at the home of friends in Seattle. Her pancake was called a Dutch Baby instead of a Bismarck and she too decreased the butter in her version. Molly’s recipe calls for four eggs instead of two and she uses half-and-half in place of the low fat milk we like.

Martha Stewart calls the Bismarck a Dutch Baby Pancake as well but adds sugar and vanilla extract in her recipe which appeared in the March 2009 issue of Everyday Food. As you can see, this pancake has made the rounds and adaptations abound. No matter what you call it or how you vary the ingredients, it's a winner.

Melt 2 tablespoons of sweet butter in a 10” cast-iron skillet over medium heat. Pour batter into skillet; place in oven. Bake until the pancake is golden and fluffy, about 10 to 12 minutes.

Remove from oven. Quickly remove the pancake from the pan and on to a serving plate. Sprinkle with fresh lemon juice and confectioner’s sugar. Add a few raspberries and blueberries, if using. Roll loosely jelly-roll fashion, slice and dust with more confectioners’ sugar. Garnish with more berries, if using. Pass lemon wedges at the table. Serves 4, unless you love it; then it only serves 2.

Variation: In the winter we like to sauté sliced apples with a little cinnamon and sugar in a skillet until desired degree of doneness and serve in place of the fresh fruit.

Yesterday when I did this post there was a nagging thought in the back of my mind that I was leaving something out of this post. Now I know what it is thanks to T. W Barritt. He left a comment that triggered my memory. His fabulous blog, Culinary Types, featured a savory Dutch Baby this past February. Savory ingredients such as gruyere and ham bring a whole new dimension to these pancakes. Thanks T. W. for reminding me. I urge everyone to click over to Culinary Types to see his pancake dinner and the savory Dutch baby. 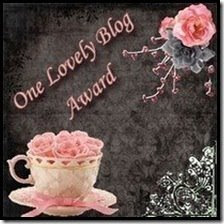 Martha from Lines from Linderhof has graciously presented me with the “One Lovely Blog Award” and I am very grateful. Martha and I both have a lot in common as we both write a food column for our local newspapers. She lives on the prairie in Kansas in a lovely 1920’s home. Her blog is filled with great recipes as well as gardening and decorating ideas. Be sure to drop by and say hello.

I would like to pass the “One Lovely Blog Award” on to my friends and readers who visit my kitchen and leave their comments, which I enjoy reading immensely. Please feel free to post the award on your blog and, if you wish, nominate 10 other blogs and link to them. Send some love back to the person who bestowed the award on you by telling them who gave you gave it to and posting a link to their site. Let your nominees know that they’ve received the award. If you do pass the award along, please let me know. I would appreciate it.

Hugs to you all.
Sam

Posted by Sam Hoffer / My Carolina Kitchen at 2:28 PM