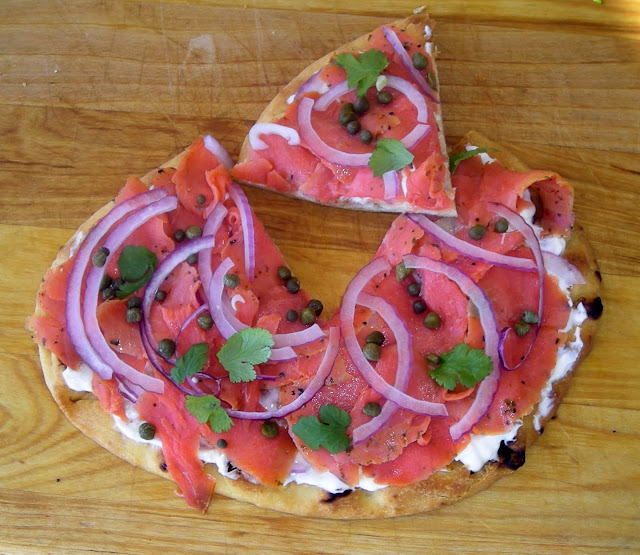 I was flipping through Jacques Pepin’s newest cookbook, More Fast Food My Way, when I came across a recipe for Smoked Salmon Pizza served on naan flatbread. Naan resembles pita bread and is a staple in places such as India, Asia, Afghanistan and Iran. I had seen it in the grocery store and was anxious to give it a try.
Jacques baked the prepared naan in a hot oven for about ten minutes, removed it from the oven and let it cool for a few minutes. He topped it with a mixture of sour cream and prepared horseradish, slices of smoked salmon, slivers of red onion, a few capers and fresh cilantro leaves. Ours looked just like the picture in his book and it was a nice change from smoked salmon on toast.


I was so intrigued by the naan that I decided to make a tomato pizza using the naan as a base. It’s fast and easy and took care of our pizza craving.
Tomato Pizza on Naan Flatbread
Excellent with a green salad
1 tablespoon extra virgin olive oil
1 naan flatbread
¾ cup grated fontina cheese
2 tomatoes, peeled and sliced
Dried oregano
Kosher salt and freshly ground black pepper
Preheat the oven to 400 degrees. Brush a small baking sheet with the olive oil, turn the naan in the oil to coat on both sides. Bake for ten minutes until it is crusty and brown, add sliced tomatoes that you have generously sprinkled with dried oregano, kosher salt and freshly ground black pepper and top with the fontina cheese.   Return to oven and cook until cheese melts and tomatoes are hot. Serves 2.
Posted by Sam Hoffer / My Carolina Kitchen at 12:49 PM