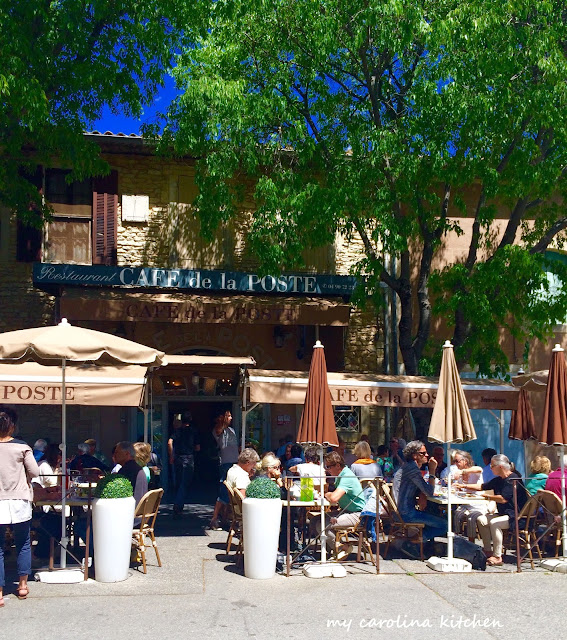 The village of Goult is in the Luberon region of France is a quaint village that we came to enjoy on our recent trip. Goult was first introduced to us by our friend Kim, whom you met last week and lives there with about 1500 other residents. Our first visit was on their weekly market day and of course what do you do after market? Eat lunch. It didn’t take us long to discover the charming bistro Café de la Poste. We saw it immediately upon our arrival and asked some of the vendors in the marketplace and were told it was THE place to have lunch. I might add that it’s important to make a reservation early on market day for lunch in small villages before you do your marketing, especially if you’re dining at a popular bistro, which this bistro certainly was. Lunch in Provence is typically served from 12 until 2. Arrive much after 1:30 or 1:45 and you probably won’t be seated. Most likely the cook has gone for the afternoon and the restaurant will be closing soon, so promptness and reservations are essential, especially on market days.

We had lunch, or dejeuner as they say in French, twice at Café de la Poste and both meals were outstanding. The plat d jour in France consists of an entrée (an appetizer), plat (the main course), and often includes a dessert at a fixed price. It was a nice leisurely lunch outside in front of the bistro under the ancient plane trees, which shaded us from the sun. Here are the photos of our first meal there. The entrée - red peppers stuffed with tuna and a salade verte, main course - blanquette de veau, and for dessert molten chocolate cake with whipped cream & star fruit. 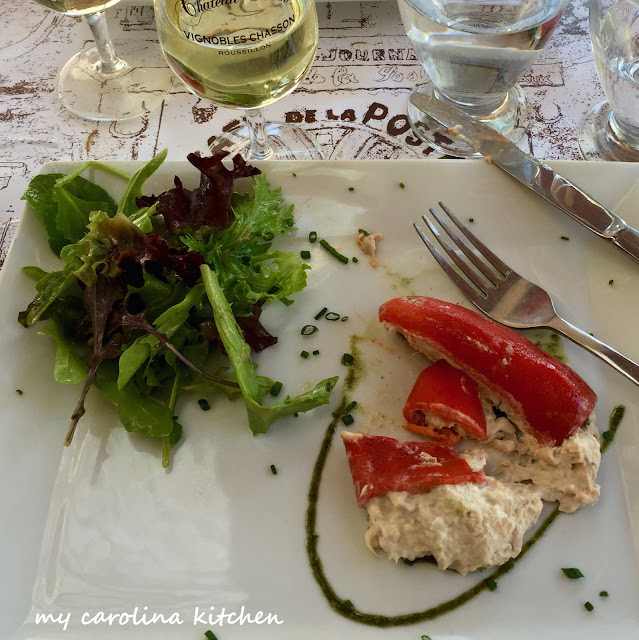 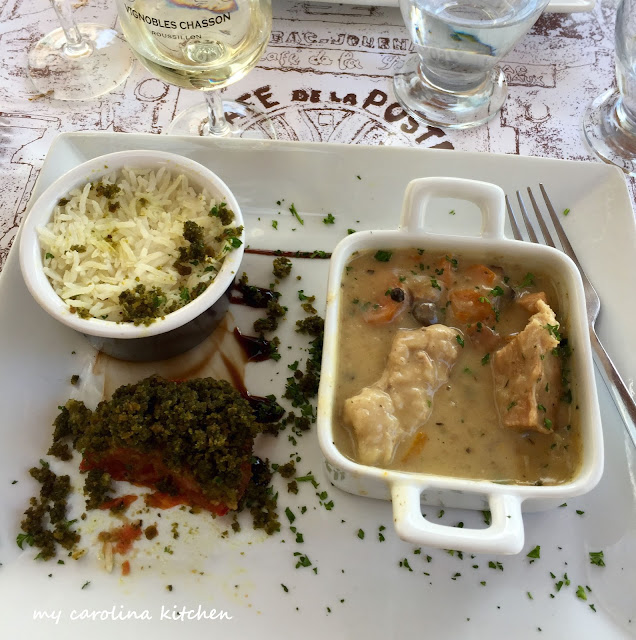 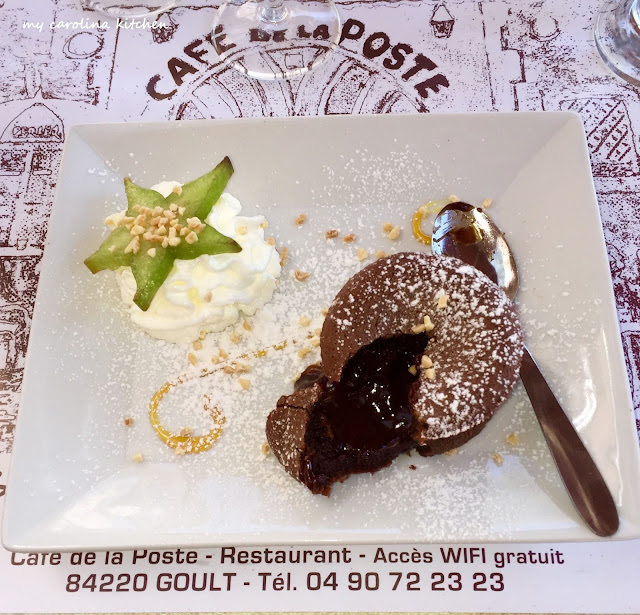 I’ve attempted to reproduce the red peppers stuffed with tuna, served alongside a green salad. The kind of red peppers they used was a mystery to me and while we were still in France I searched and searched in the markets for fresh long red peppers and never found them. One day while we were still there I decided to steam fresh red bell peppers in the microwave, then cut them in long pieces and stuff them with tuna, but I wasn’t satisfied that they were the same peppers. When we returned to the US, I googled the different kinds of red peppers and came up with piquillo peppers from Spain. I’m still not certain they are the same peppers as the ones at Café de la Poste, but they are close and I am pleased with the results. I chose to combine the tuna with French ingredients such as shallots, herbs de Provence, and fresh rosemary. 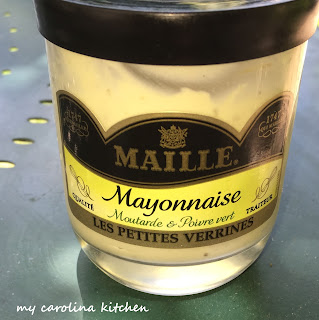 Café de la Poste’s stuffed peppers also contained mayonnaise as you can see in the photo above. We found the most wonderful French mayonnaise at the Intermarche (the big supermarket in Saint-Remy). It was made by Maille and contained green peppercorns. I’ve searched for it in the states but with no success. So in the recipe you’ll see I added a few green peppercorns (the packed in brine kind) that we crushed in a mortar and pestle to Hellmann’s mayonnaise to simulate the flavor. If you’re so inclined you can make your own mayonnaise, which is very easy in the blender or food processor. You’ll find the recipe here. Homemade mayonnaise is always superior to bought; just add crushed green peppercorns to taste and you’ve got a French version of Maille’s mustard with green peppercorns.

Their presentation of the stuffed peppers was spectacular, but of course you can’t tell it by the above picture because we dived in to ours before we remembered to take a picture. The peppers were served upright like small erect red surprise packages as I’ve attempted to do below. I can guarantee you that theirs were much prettier. My version of the stuffed peppers and salad is below, but first a little history on the pretty red piquillo peppers. 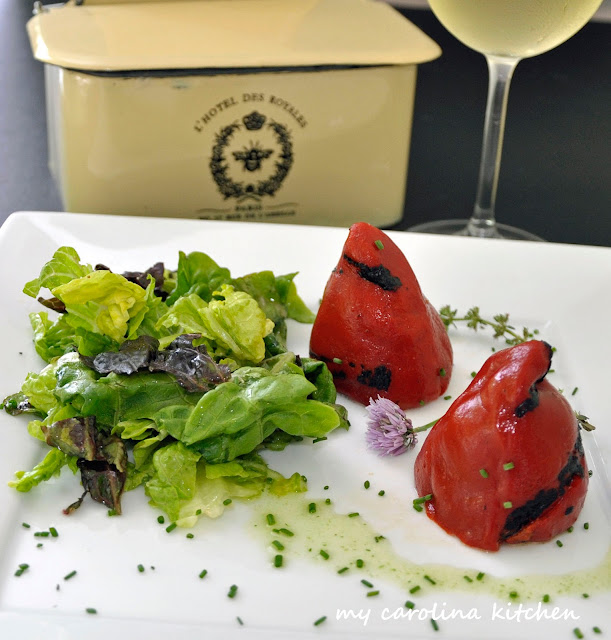 Piquillo peppers are an interesting pepper and not a vegetable you’ll find fresh in the produce section of your local supermarket. According to La Tienda, an on-line source of Spanish products, piquillo peppers are traditionally grown in Northern Spain near the town of Lodosa. La Tienda carries the authentic D. O. (Denomination of Origin) Ladosa Spanish piquillo peppers, link here. Piquillo peppers are brilliant red peppers that are wood-fired and smoked, resulting in a sweet, tangy flavor with a touch of smokiness and a bit of spice. After roasting, the peppers are peeled, all by hand, then packed in jars. They only produce peppers once a year and they arrive by the truckload in Navarra, Spain, bright red and perfectly ripe. The harvest is in the fall and no short cuts are taken, no frozen or green peppers are stored for later. Once they run out of peppers from the fall harvest, you have to wait until the following year to order. I was able to find a jar of grilled piquillo peppers from Peru (which I used here) at our local Ingles Supermarket here in the mountains, but if possible you want to buy those that have the D.O. (Domination of Origin) symbol on the jar, attesting to the fact that they were grown and grilled in Navare, Spain.

Be sure to use a good quality tuna packed in olive oil. Save the ones packed in water for tuna sandwiches. The olive oil makes all the difference in the world in the flavor. I’ve always had luck finding good tuna in olive oil in Italian markets or you can find a nice selection on line at Amazon here. 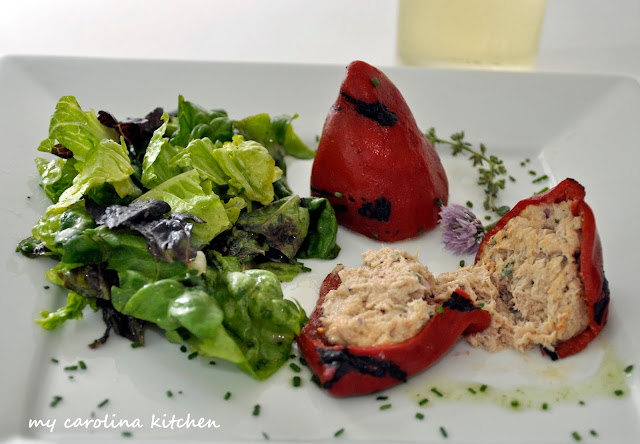 Drain tuna into a bowl, reserving the oil, and flake well with a fork. Add grated lemon zest (it’s best to grate the lemon with a zester), shallot, Herbs de Provence and chopped thyme. Add the crushed green peppercorns to the mayonnaise and mix well. Add mayonnaise to the tuna, mix well and if the mixture seems dry, add some or all of the reserved olive oil from the tuna. If the mixture is still too dry, add a bit more olive oil or mayonnaise. Season with sea salt and freshly ground black pepper to taste. (The recipe can be made to this point and the tuna mixture, covered, can rest in the refrigerator for several hours.)

If you have made the tuna mixture in advance, bring to room temperature. Otherwise proceed to stuff the tuna carefully into the peppers with a spoon (open the peppers first with your fingers, taking care not the tear them).

Serve stuffed peppers with a tossed green salad dressed with a basic French vinaigrette, recipe below, omitting the shallot. 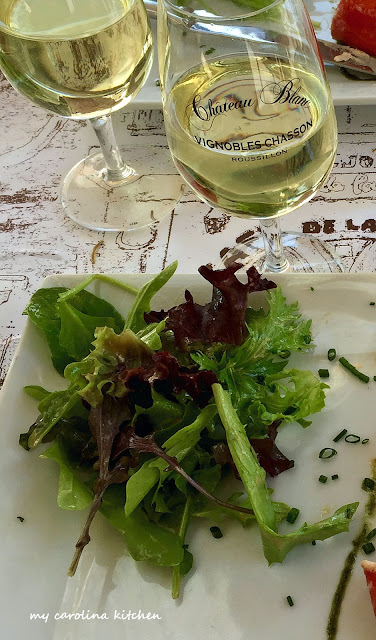 Place all of the ingredients into a jar with a tight fitting lid and shake well. Easily doubled or tripled. This vinaigrette saves well in the refrigerator for a day or two. Omit the shallot, Dijon mustard and hot sauce for a more basic vinaigrette. The mustard is used to emulsify the vinaigrette and keep it from separating. The shallot and hot sauce bring an added flavor and are highly recommended.

Next time I’ll show you our second meal and some recipes to go along with it. I also have our French butcher in Maillane’s personal recipe for Blanquette de veau, which will be shared at a later time. We’ll also take a stroll through the village of Goult and meet some darling French school girls.

We highly recommend Café de la Poste when you visit the Luberon area of Provence. The staff is friendly and attentive, the service prompt, the wine excellent, and we’ve never been disappointed with the food.

This will be shared with Foodie Friday at Rattlebridge Farm and Miz Helen’s Country Kitchen Full Plate Thursday.
Have a great weekend everyone.