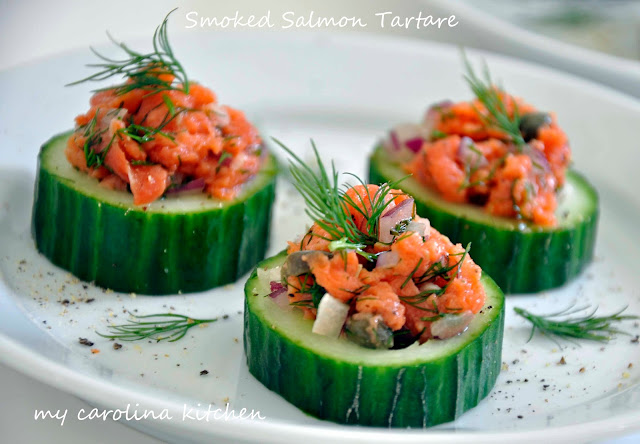 Smoked salmon on cucumbers is a snazzy appetizer to serve for dinner guests or at a party. It is very easy to prepare and goes together quickly. Plus it can be made a few hours in advance and held in the refrigerator until your guests arrive. Or right before dinner you can put this appetizer together with your friends as we did recently when one of my oldest and dearest friends from childhood was here with his wife.

In a large bowl, whisk together the olive oil, lemon juice and Dijon mustard. Add salmon, onion, capers, and dill and stir to combine. Grind some black pepper over the mixture and taste for seasonings and adjust as necessary.

Using a small melon baller or spoon, scoop out some of the center portion of each cucumber slice, making sure not to go all the way through the cucumber. Mound 2 teaspoons of the smoked salmon tartare in the center of the cucumber slice (I used the melon baller for this). Garnish with tiny sprigs of fresh dill if desired. Serve right away or store on a covered tray in the refrigerator for several hours in advance of serving.

When I realized that we make a similar salmon spread that also uses capers and red onion, using left-over salmon combined with a cream cheese/sour cream mixture, I came up with a new version of our old salmon spread by adding smoked salmon from the tartare recipe for a burst of extra flavor.

Left-over cooked salmon stands in for part of the smoked salmon, making it a less expensive appetizer but still retaining the flavors of the fancier version. Our tried and true favorite method of cooking salmon is to broil it, recipe here. We always cook a little extra for occasions such as this. Cream cheese and sour cream hold the mixture together in place of the olive oil and the other ingredients remain the same. 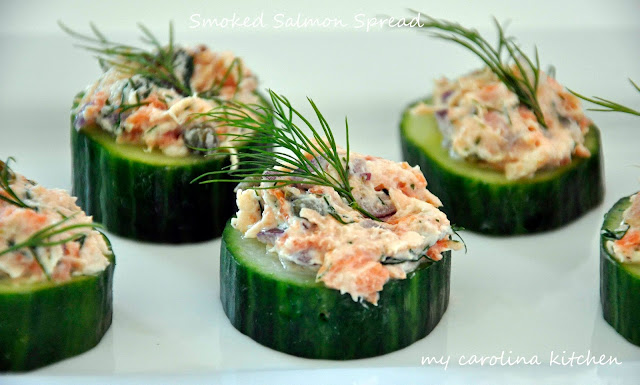 Smoked salmon spread on cucumber rounds
From My Carolina Kitchen

I don’t really follow a formal recipe. I operate by eye-balling the mixture based on how much left-over salmon I have and taste as I go.  Here’s what I do.

Using a two to one ratio, place chopped left-over cooked salmon and chopped smoked wild sockeye salmon in a large bowl. Toss in a little finely chopped red onion. Again using a two to one ratio, add a combination of whipped cream cheese and sour cream (low fat works fine for both of these) and stir to combine with the salmon and onions. Too much cream cheese makes the mixture stiff; too much sour cream makes it loose. Squeeze a little fresh lemon juice over the salmon; add some small capers, a little chopped fresh dill and several grinds of black pepper. Taste for seasonings and texture and adjust accordingly.

To serve, slice a portion of an English cucumber into ½” thick rounds. Use a small melon baller or spoon & scoop out some of the center portion of each cucumber slice, taking care not to go all the way through the cucumber. Mound 2 teaspoons of the salmon spread in the center of the cucumber slice (I used the melon baller for this). Garnish with tiny sprigs of fresh dill if desired. Serve right away or store on a covered tray in the refrigerator for several hours in advance of serving. Another one of our favorite ways to serve this salmon spread is on traditional table water crackers, such as Carr’s.  As you can see, it is different from the salmon tartare. 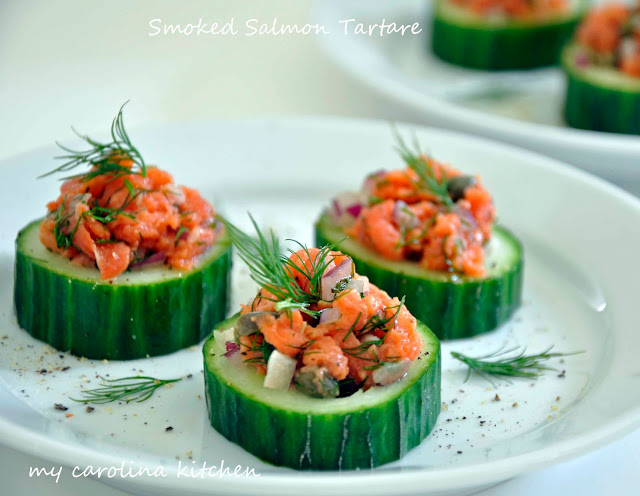 My new Facebook page for My Carolina Kitchen is now up and running. Thank you Becky McNeer of Not Your Ordinary Recipes for your help. If you haven’t already “liked” my new page, I would be very pleased if you would click over and like My Carolina Kitchen. Click here to like or click the link to Facebook in the right column on the blog.

This will be shared with Foodie Friday at Rattlebridge Farms, Miz Helen’s Country Kitchen Full Plate Thursday, Foodie Friday at Simple Recipes, Foodtastic Friday at Not Your Ordinary Recipes, Seasonal Sunday at the Tablescaper, & Food on Friday at Carol's Chatter.

Posted by Sam Hoffer / My Carolina Kitchen at 9:21 AM