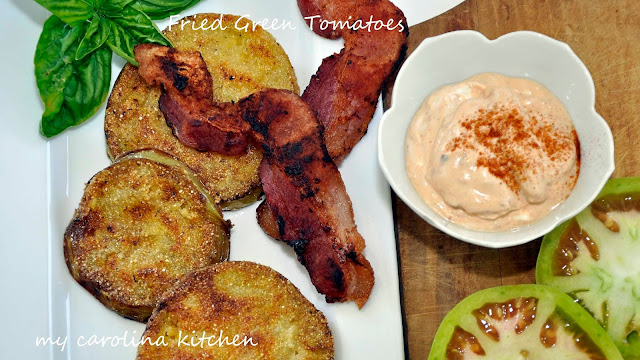 There are many recipes for fried green tomatoes, including those that use Japanese panko bread crumbs for breading, others deep fry the tomatoes, or use bacon drippings.

Our breading is on the simple side and we serve our fried green tomatoes for breakfast with bacon and eggs. We shallow fry the tomatoes in a minimum of fat rather than deep frying them. During the summer fried green tomatoes are also nice served with a sauce for dipping as part of a luncheon dish with a green salad and corn on the cob.

These fried green tomatoes have character. We think it is important to taste the tomato, not the breading. The cornmeal/flour breading produces a golden, crisp tomato with a simple, not heavily breaded exterior, and a savory, juicy tomato interior. 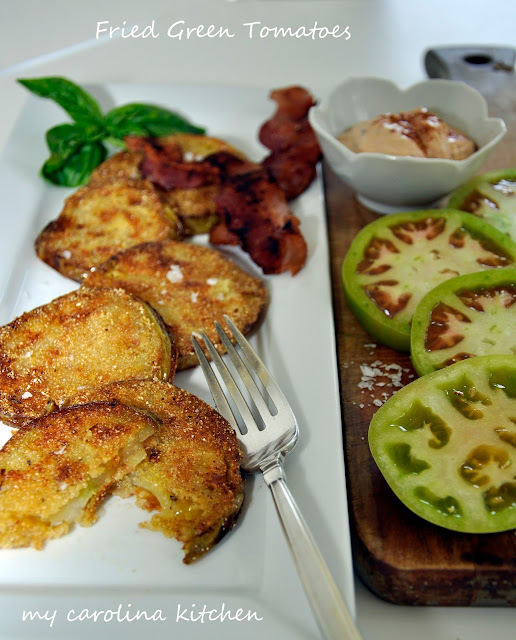 There are some tips to making good fried green tomatoes. First, salt the tomatoes right before you bread them. Salting foods in advance brings out the moisture and make them soggy when cooked. Second, a pinch of sugar in the breading takes away any bitterness from the under-ripe tomato. Third, just as anything that you brown, you want to make sure not to crowd the pan or the food will end up soggy. And finally, serve them as soon as you take them up. Fried green tomatoes must be hot. As they come to room temperature, the breading turns soggy.  You can see that most of the tips revolve around the word "soggy."  That makes sense because no one wants to eat a soggy tomato.

I’ve included what is referred to in our kitchen as “Meakin’s famous chipotles in adobo aioli sauce.” This is a very versatile sauce and can be used for many dishes, including a dip for fried green tomatoes. We use the sauce in fish tacos, dip boiled shrimp in it and serve them as an appetizer, or use it in place of mayonnaise where you want a kick of extra spice or smoky flavor. We puree the entire can of chipotles in the adobo sauce in a small food processor and store them in a jar in the refrigerator. They seem to last forever. 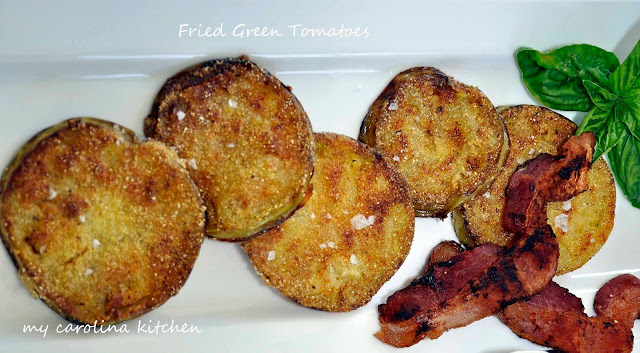 My version of fried green tomatoes is a simple one and doesn’t require much of a recipe. I start by making a dredging mixture of three parts yellow cornmeal to one part all-purpose flour, a pinch of sugar, and a few shakes of cayenne pepper on a sheet of wax paper and stir to incorporate all of the ingredients.

I slice the tomatoes right before I dredge them and salt them at the last minute. Coat both sides of the tomatoes in the cornmeal/flour mixture, then sauté them in a non-stick skillet that’s been preheated with a little bit of canola or other neutral tasting oil in it. You don’t want to crowd the skillet, so you may have to cook the tomatoes in batches. Shallow fry the tomatoes, turning half way through so both sides brown evenly. When done, remove the tomatoes, salt them once again, and serve immediately.

If you are making more than one batch, plate the cooked tomatoes on a heat-proof plate or platter large enough to hold the tomatoes without stacking them and keep warm in a 150 degree F oven. If you stack the tomatoes they will get soggy. 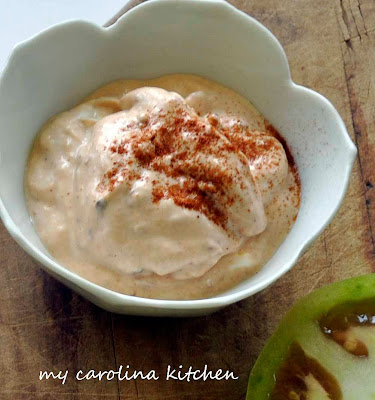 Whisk the ingredients together in a bowl and taste for seasonings. Too much honey will make it sweet & ruin it. The purpose of the honey is to temper the fire from the chipotles in adobo sauce. You should not be able to taste the honey. The finished sauce should have a nice, smoky flavor. The sauce will keep covered in the refrigerator for several days. 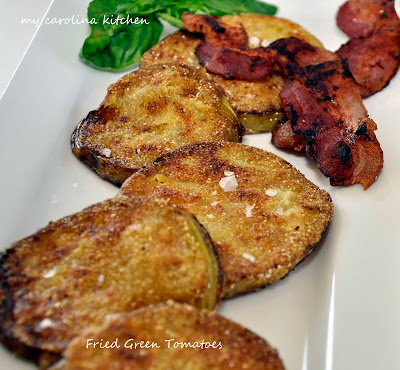 This will be shared with Foodie Friday at Rattlebridge Farms, Miz Helen’s Country Kitchen Full Plate Thursday, Foodie Friday at Simple Recipes, Foodtastic Friday at Not Your Ordinary Recipes, and Seasonal Sunday at the Tablescaper.


Posted by Sam Hoffer / My Carolina Kitchen at 8:00 AM

Email ThisBlogThis!Share to TwitterShare to FacebookShare to Pinterest
Labels: Breakfast