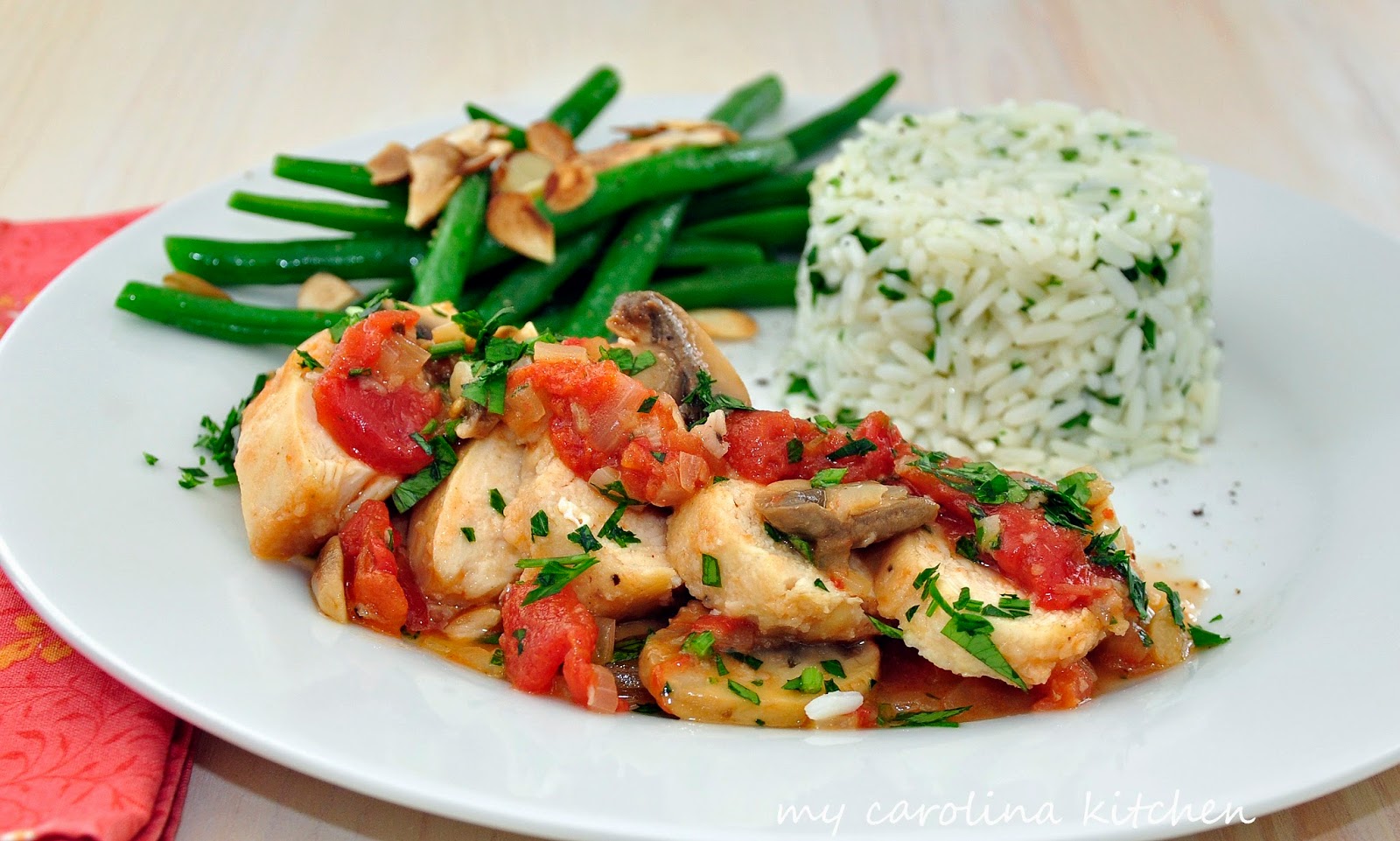 Chicken Marengo is one of my all time favorite French recipes, dating from when I first learned to cook as a new bride. This recipe is from my first cookbook, With a Jug of Wine by Morrison Wood. Morrison Wood wrote a newspaper column called “For Men Only!” which appeared weekly in the Chicago Daily Tribune and other newspapers. Not only do his recipes endear me to the book, but his stories that introduce the recipes are delightful entertaining and you feel he’s right there in the kitchen with you.

With a Jug of Wine was first published in 1949 and the recipes, some with a French flair. Among the recipes are Boeuf Bourguignon, Boeuf de Daube, Cassoulet, File of Sole Normande, Lobster Thermidor, Cocquille le Sainte Jacques, Partridges a la Chausser, and Shrimp De Jonghe from a famous Chicago restaurant by the same name (a Hoffer family favorite going way back) weren’t widely available to the home cook. Morrison Wood was far ahead of his time. Remember, Julia Child’s Mastering the Art of French Cooking wasn’t published until 1961. I find Morrison Wood’s recipes to be every bit as reliable as Julia Child and Ina Garten.

I’m not the only one who loves Morrison Wood. My friend Barbara of Movable Feasts recently touted With a Jug of Wine and featured Morrison Wood’s chili, link here, which I also agree is some very fine chili. Long out of print, copies of the cookbook can be found from time to time at Amazon and from other internet sources. 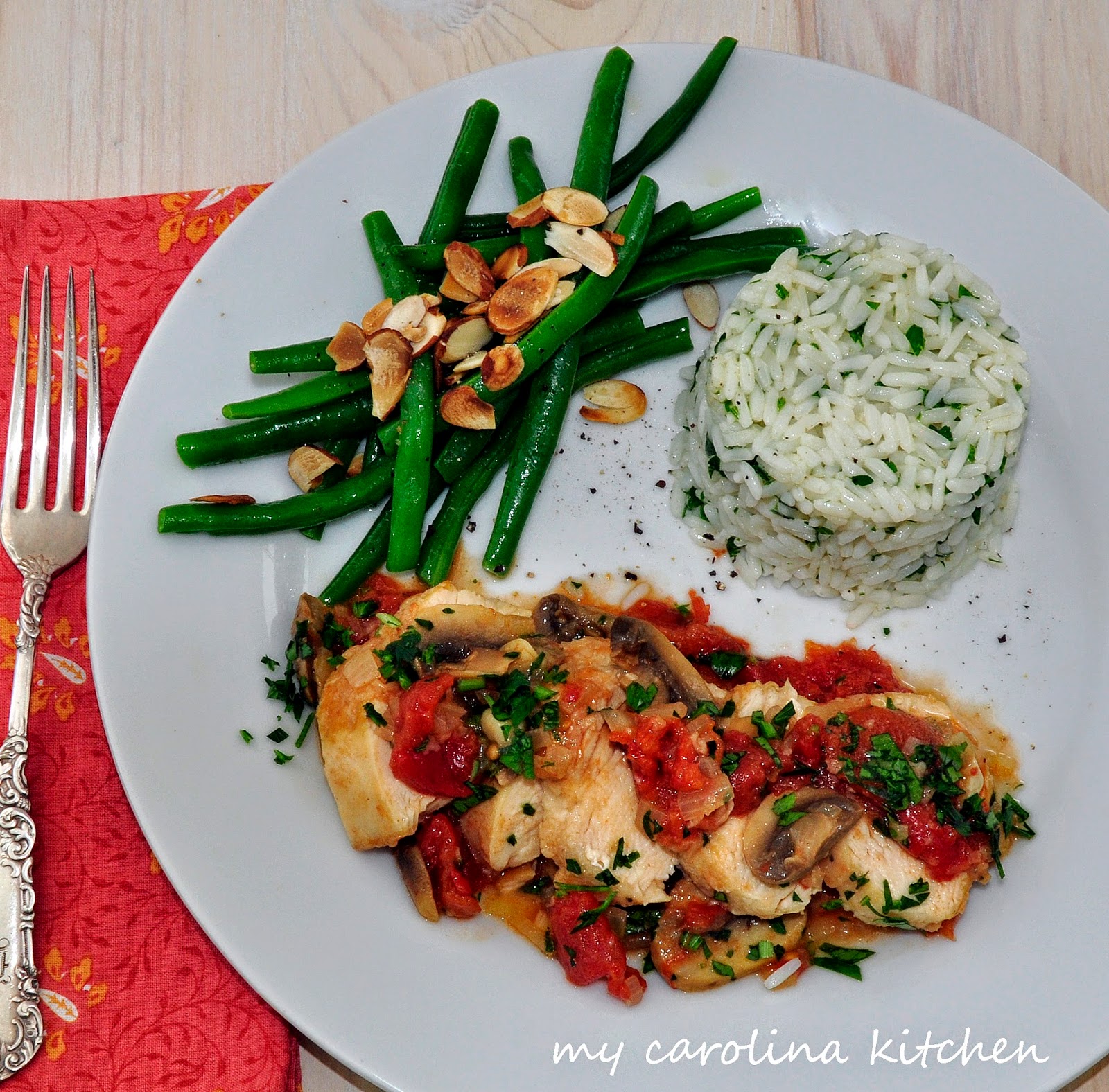 The wonderful history of Chicken Marengo alone is enough reason to serve it at a dinner party. A great conversation starter at the table is to tell your guests about its colorful history. Napoleon’s chef was a man named Durand. According to legend, when Napoleon defeated the Austrians on the battlefield near the village of Marengo in northwest Italy in June of 1800, Durand created the dish Chicken Marengo. The supply trains hadn’t been able to keep up with the troops, so there wasn’t anything with which to make dinner for the temperamental Napoleon. Durand decided to send some of his men into the countryside to find provisions for a celebration dinner. On a nearby farm they found chicken, mushrooms, tomatoes, onions, olive oil and garlic.

There are dozens of stories about the creation of the actual dish. Some say it was garnished with crayfish and fried eggs; others insist it included olives, anchovies, and Italian Prosciutto, which would make it Chicken a la Provençale. Several years ago I did a post on Chicken Marengo and combined Chicken Marengo with Chicken a la Provençale, link here. Today I’ve gone back to Morrison Wood’s original Chicken Marengo.  I took the liberty to use boneless, skinless chicken breasts, but it’s equally delicious with a cut up whole chicken, as the original recipe called for. I urge you to give it a try. It’s simple to make and is always a hit. I like to serve it with my mother’s rice, recipe here, and green beans with toasted almonds. It's interesting that several years ago Cooking Light magazine had an article on how to perfectly cook rice and it was exactly the same method as my moms. 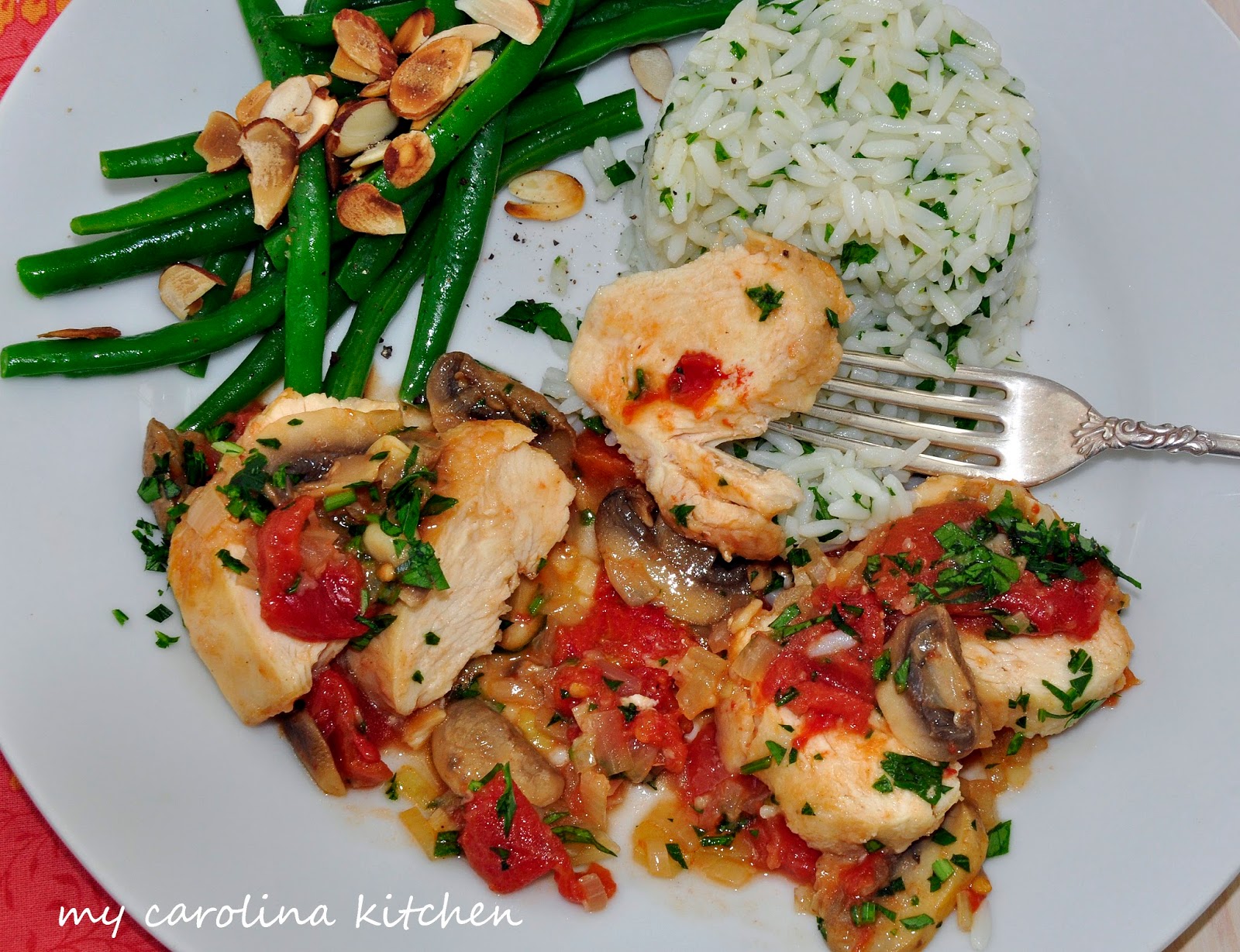 Remove any excess skin from the chicken, then salt and pepper them and dust lightly with flour. In a large non-stick skillet, heat the olive oil, and sauté the chicken until golden brown, turning frequently so all of the pieces are done evenly. Remove chicken from skillet and keep warm.

In the same skillet, put chopped onions, garlic, mushrooms, parsley, and more olive oil if necessary. Cook this mixture until the mushrooms are tender, then add the tomatoes and their juices, dry white wine, brandy, tomato paste and 1 tablespoons flour. Mix and blend the ingredients well and allow to simmer over a medium flame for about 10 minutes. Now put the chicken in the sauce, cover the pan, and simmer until the chicken is completely tender, about 15 to 20 minutes for boneless, skinless breasts and 30 minutes or so for a whole cut up chicken. Serve with the sauce and garnish with chopped parsley. Fluffy rice, seasoned with finely chopped flat-leaf parsley and a pat of butter, makes a nice accompaniment.

This will be shared with Foodie Friday at Rattlebridge Farm, Food on Friday at Carole's Chatter and Miz Helen’s Country Kitchen Full Plate Thursday.
Have a great weekend everyone.