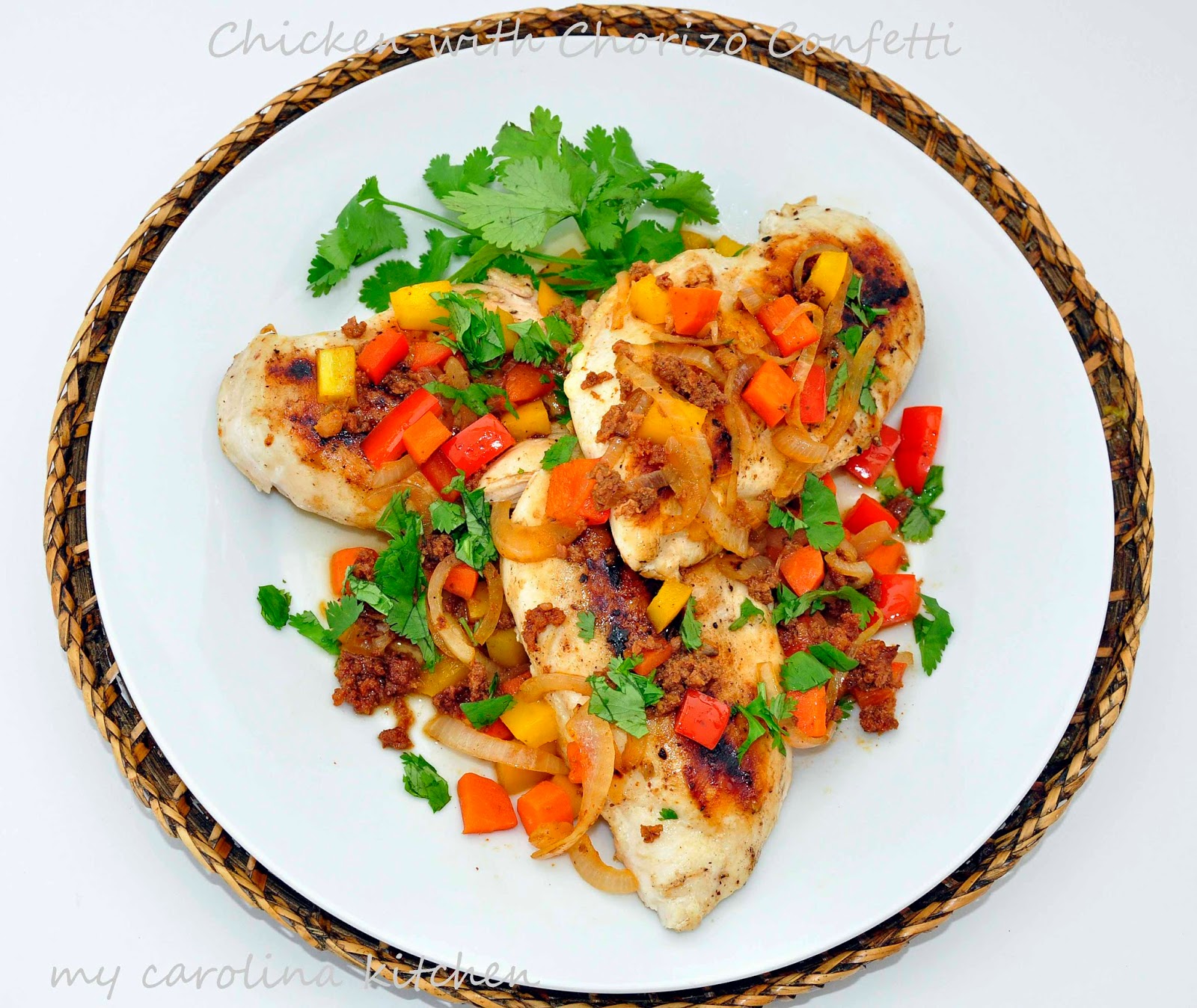 This is a fine example of how you can take a plain grilled chicken breast dinner from boring to exciting – garnish the breasts with a sprinkling of a chorizo confetti and colorful vegetables, add a simple green salad, and your meal can be on your table in about 30 minutes.

I’ve never really cooked with chorizo and quickly found I had some things to learn. Last summer when we were in the mountains I was making a seafood paella that called for chorizo. I asked about chorizo in our local grocery store, a very nice store with a surprising good selection, including a deli and cheese department that is far better than Publix in Florida, and I was directed to the meat department to find packaged ground pork sausage labeled chorizo. 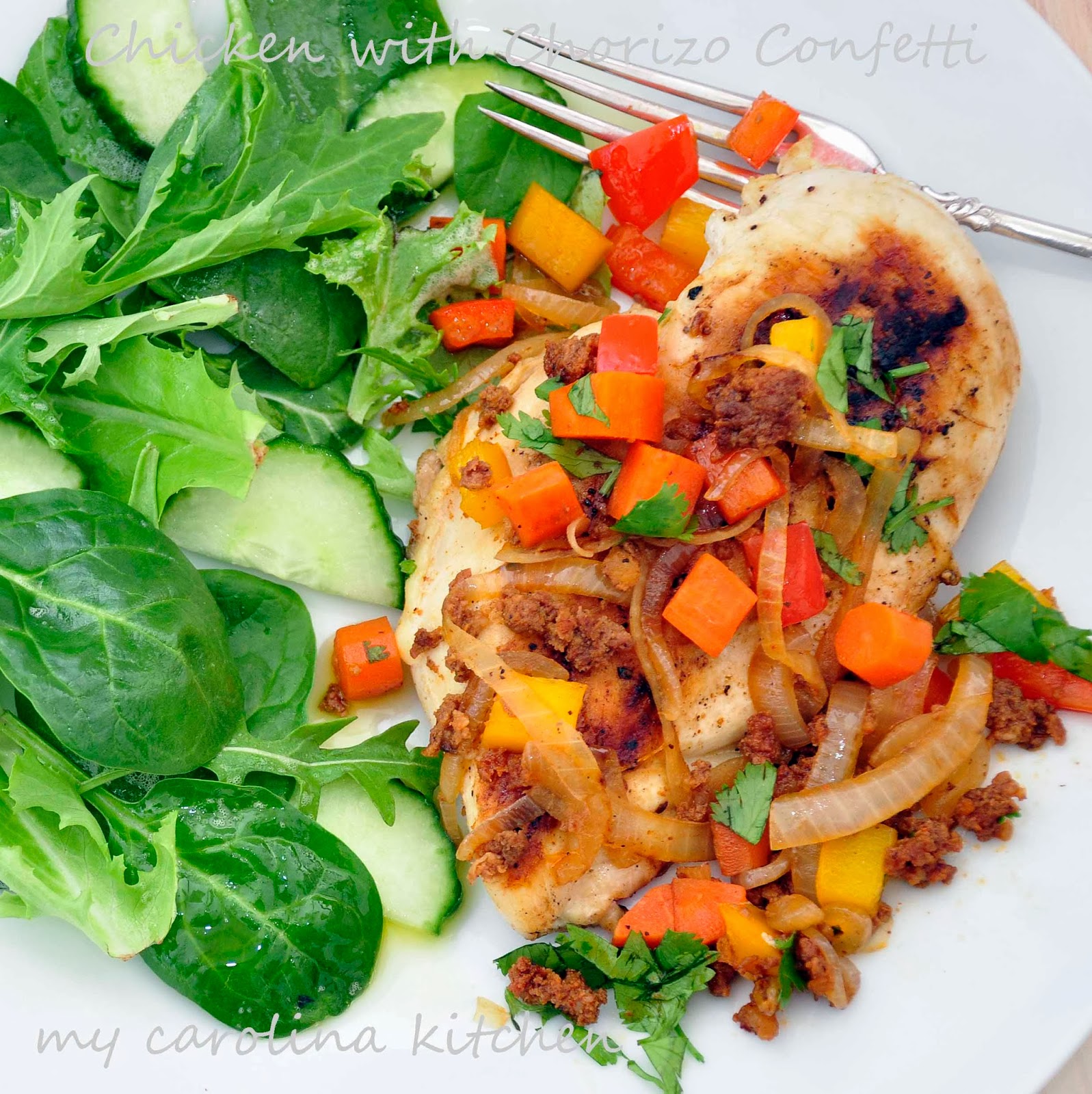 I am fairly well read when it comes to most foods and always thought chorizo was a cured smoked hard sausage of Spanish or Portuguese origin that is sliced and eaten without cooking. It is and is called Spanish chorizo. But what was the ground version I found? I learned that chorizo comes in two forms - the Spanish version, a cured smoked sausage described above, and the Mexican version, a fresh ground pork sausage that must be cooked before eating, and by the way does not work well in paella. 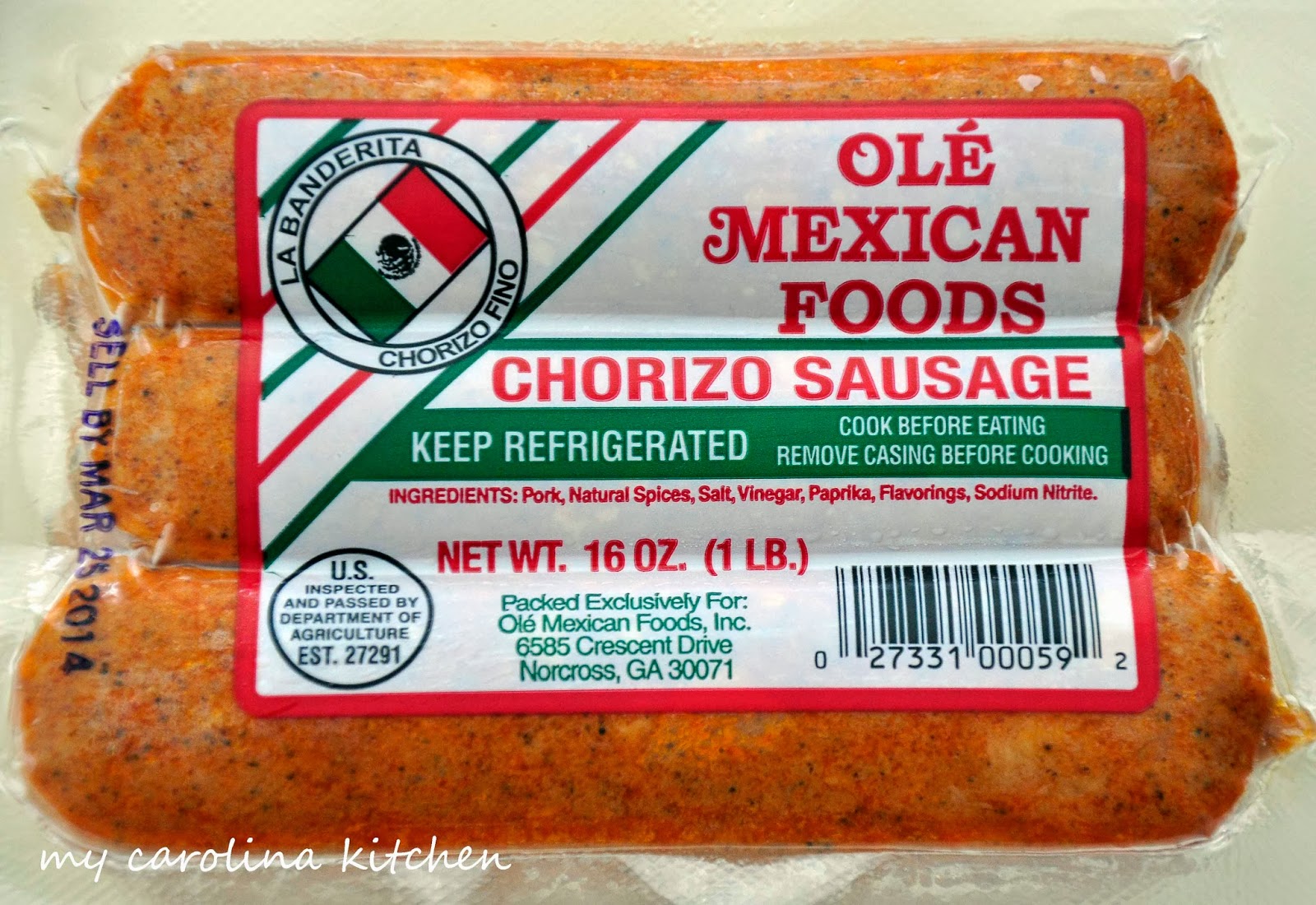 Today’s recipe uses the Mexican chorizo, which is quite spicy compared to being smoky, and requires cooking. Next week I’ll use the Spanish chorizo in an entirely different recipe and you’ll be able to see the difference.

I made a few changes to the original recipe, link below. I wanted to know more about the Mexican chorizo and what it tasted like, so I doubled the one tablespoon per serving to two. I also omitted the green bell pepper and upped the amount of the other two peppers to add more color and to make up the difference in volume. Mexican chorizo is quite spicy, so if you or any member of your family doesn’t like very spicy meats, I would return to the one tablespoon per serving that was called for in the original recipe. Serve with a tossed green salad with a few half moon slices of a European cucumber, dress the salad with a simple vinaigrette, and you have dinner ready in 30 minutes. 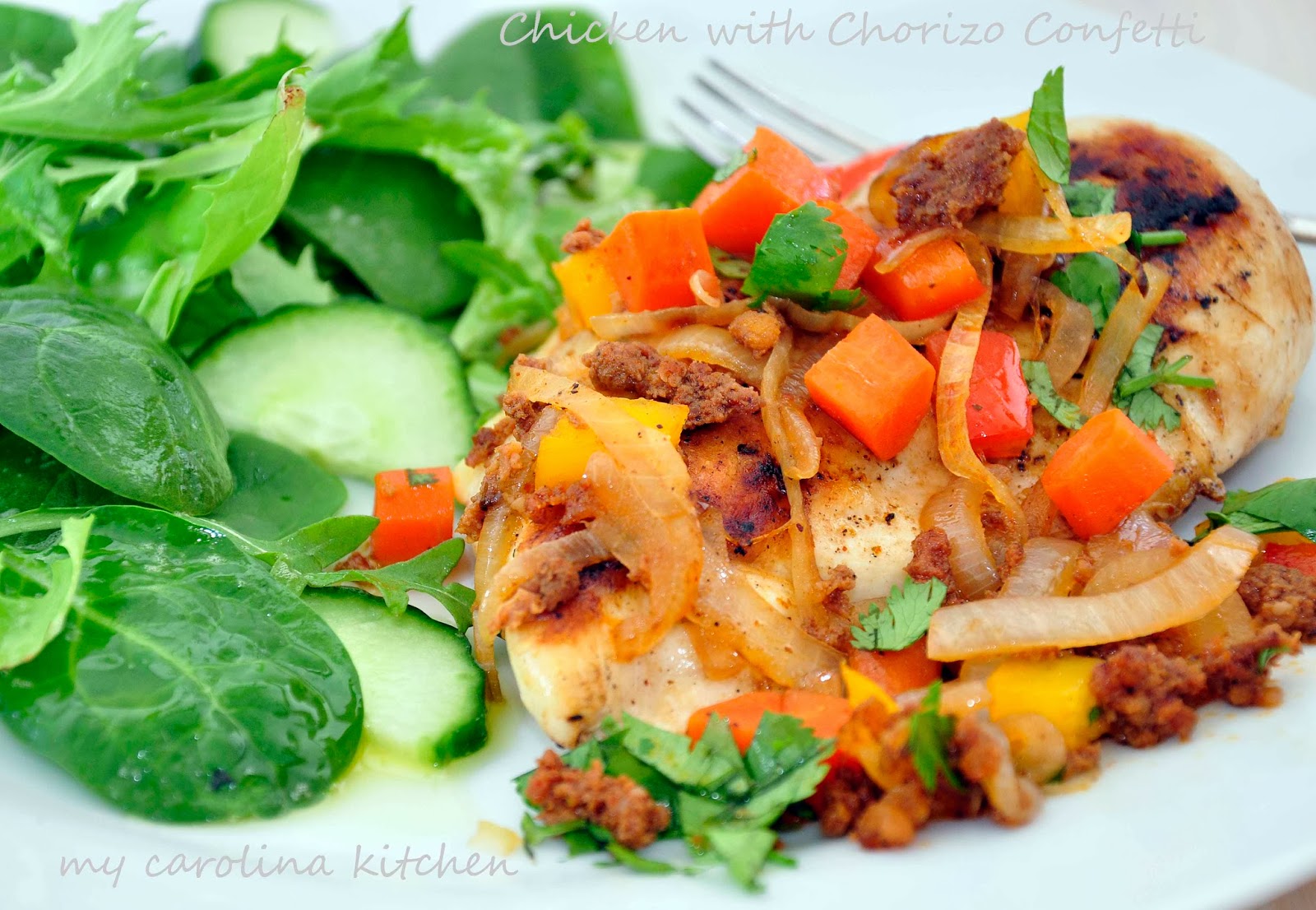 Heat a grill pan over medium-high heat. Coat grill pan with cooking spray. Season both sides of the chicken with salt and freshly ground black pepper. Add chicken, cook 6 minutes on each side, turning once, or until done. Remove to a serving platter and keep warm.

While the chicken cooks, heat a large non-stick skillet over medium-high heat. Add chorizo and cook one or two minutes, stirring to crumble. Add onion and carrot, season with salt and freshly ground black pepper, and cook 2 minutes, stirring occasionally. Add the bell peppers and cook until crisp tender, about a couple of minutes. Add the broth and cook 2 minutes or until the liquid is almost evaporated, scraping the pan to loosen the browned bits. Spoon the chorizo mixture over the chicken and garnish with chopped cilantro. 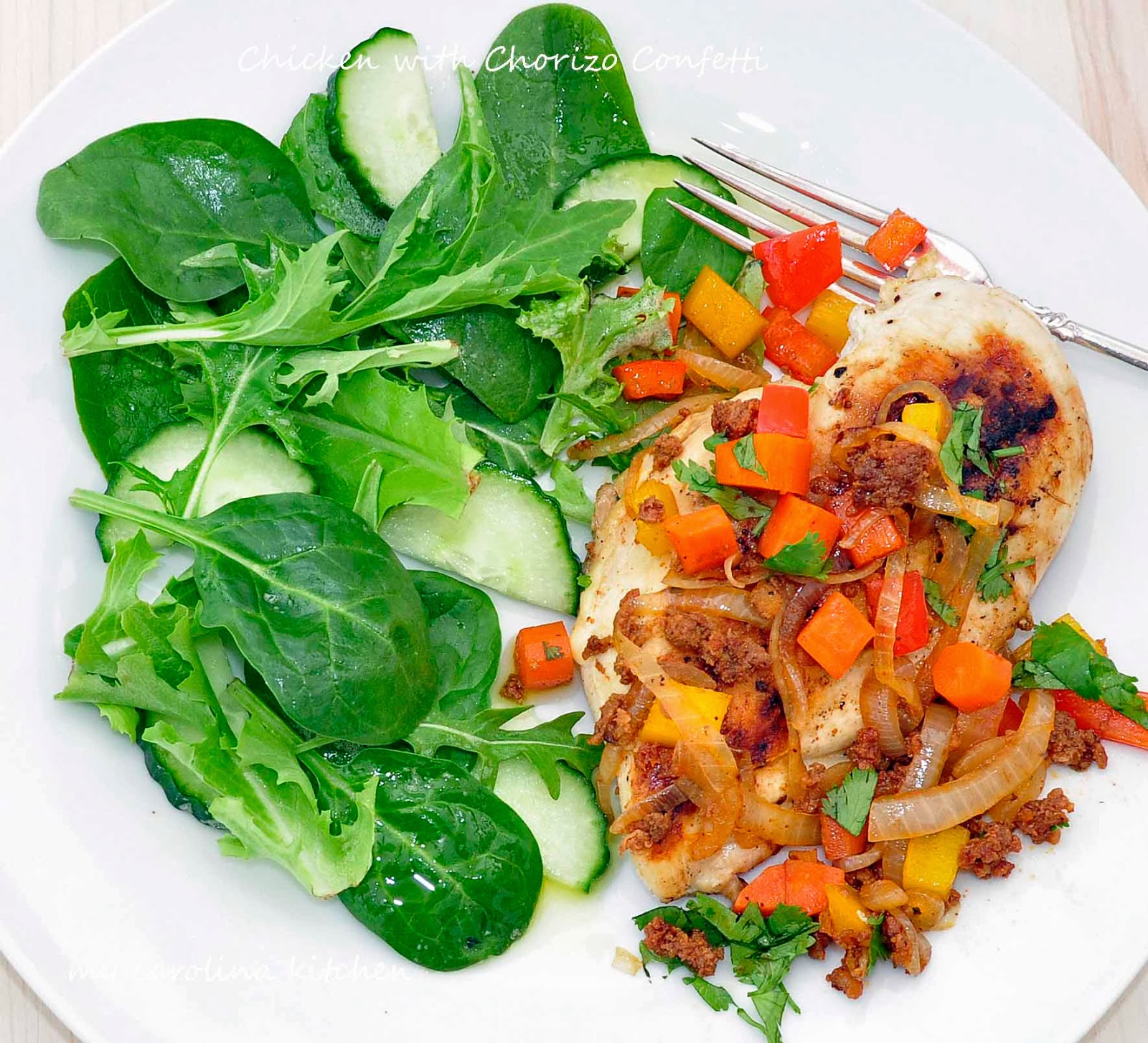 The Super Bowl is this weekend. If you are looking for something to serve at your party, I recommend Meakin's Basic Guacamole Dip. Guacamole dip is a real crowd-pleaser and easy to make, plus we have two variations and a tip to help keep the avocado green, link here. Go Broncos. Posted by Sam Hoffer / My Carolina Kitchen at 8:00 AM